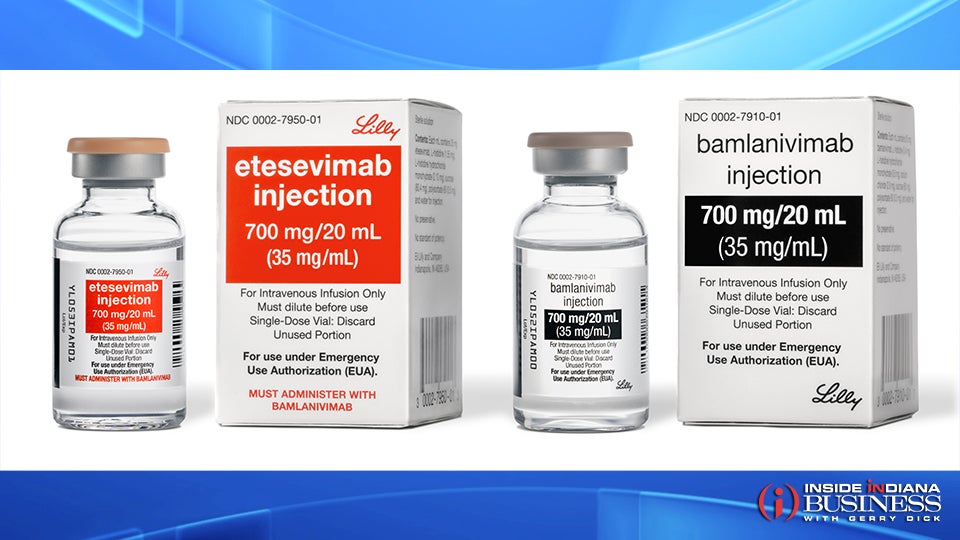 INDIANAPOLIS (Inside INdiana Business) — Indianapolis-based Eli Lilly and Co. says the combination of two of its COVID-19 antibody therapies continues to reduce hospitalizations and death in high-risk patients recently diagnosed with the disease, according to a new clinical trial. The company says data from the Phase 3 study support the use of bamlanivimab and etesevimab, which were recently granted an Emergency Use Authorization from the U.S. Food and Drug Administration.

The latest BLAZE-1 study included 769 patients, aged 12 and older with mild to moderate COVID-19, some of which received the antibody combination, while the others received placebo. Lilly says the study showed an 87% risk reduction with the therapies.

There were four deaths reported in the study and Lilly says they were all related to COVID-19 and all occurred in patients taking placebo. No deaths were reported in patients who received bamlanivimab and etesevimab.

“These positive results reinforce our previous findings and support the authorized dose of bamlanivimab 700 mg with etesevimab 1400 mg,” said Dr. Daniel Skovronsky, chief scientific officer for Lilly and president of Lilly Research Laboratories. “The consistent results observed in multiple cohorts of this trial over several months, even as new strains of COVID-19 have emerged, indicate bamlanivimab with etesevimab maintains its effects against a range of variants, particularly those circulating in the U.S.”

In addition to receiving the EUA in the United States, the combination therapy has also received a positive scientific opinion by the European Medicines Agency’s Committee for Medicinal Products for Human Use.

Bamlanivimab has also been authorized for emergency use by itself in the U.S., Canada, and the United Arab Emirates, among many other countries.

You can learn more about the latest trial by clicking here.