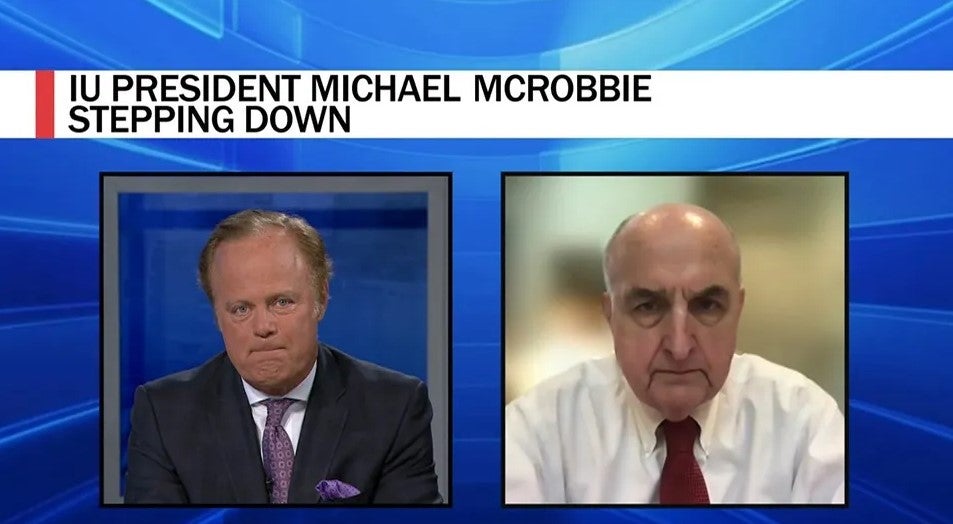 BLOOMINGTON, Ind. (Inside INdiana Business) — When he retires at the end of the month, Indiana University President Michael McRobbie will put a wrap on 14 years in the president’s office and 24 years overall in senior leadership positions at IU. McRobbie has led an academic transformation at IU, launching 10 new schools over the past decade. A $3.9 billion capital campaign on his watch was one of the largest by any public institution in the country. But his biggest challenge came at the end of his tenure with the COVID-19 pandemic.

“It’s probably been the most difficult time in the university’s 200-year history,” said McRobbie, who credits efforts to mobilize university assets, including the schools of medicine, nursing and public health, with navigating the unprecedented challenge. “We used them to craft a strategy that we would use to keep the whole university community safe during that period, to stay open and to keep functioning as a university and to do all that safely.”

McRobbie talked about his tenure as president on this weekend’s edition of Inside INdiana Business with Gerry Dick. Click here to watch the full interview.

McRobbie, who became IU’s 18th president in 2007, announced plans to retire in August. His successor will be Pamela Whitten, who has been serving as president of Kennesaw State University in Georgia.

While he is retiring as president, McRobbie will assume new titles.  The IU Board of Trustees recently named him president emeritus and university professor and granted him the honorary title of university chancellor.

McRobbie is just the third person in school history to be named university chancellor.