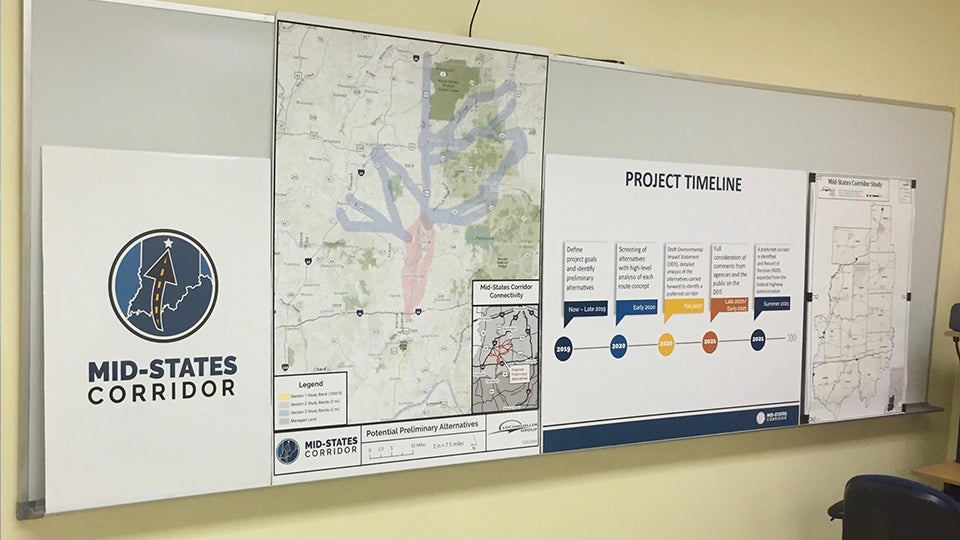 JASPER, Ind. (Inside INdiana Business) — The team behind a project to create an improved highway connection in southern Indiana has narrowed down potential routes. The Mid-States Corridor project, which would run from the Ohio River at Rockport through the Huntingburg and Jasper area and connect to I-69, has identified 10 preliminary alternatives after a lengthy screening process. The project team now plans to further study the 10 alternatives before narrowing it down to one this fall.

In an interview with Inside INdiana Business, project spokesperson Mindy Peterson said the project team considered many factors during the screening process.

Peterson says when it comes to impact, the project team looked at the environmental, residential and business impact, among others, for each preliminary alternative. The team also looked at the potential construction cost for each alternative, which will continue to be refined as the process moves along.

A series of public meetings will take place next week to gather public input. Peterson says feedback from residents and businesses is crucial to the process.

“What we are working toward is identifying a single preferred corridor by this fall so the feedback that we get right now from both the public and various agencies will help inform that decision,” said Peterson.

Each meeting will run from 5:30 p.m. to 7 p.m. with an open house format and presentations from members of the project team. The meetings will take place at the following dates and locations:

In addition to the meetings, the project team has posted a screening report questionnaire online for those who want to submit their opinion on the preliminary alternatives. The questionnaire will be available through March 23.

Peterson says a single preferred corridor will be named this fall when the Draft Environmental Impact Statement is expected to be published.

“That’s going to be a major milestone for the project. We’ll have public hearings at that time. Hearings are a little bit different from meetings. Folks will have the chance to sign up and they will actually be able to deliver both oral or written comments, whatever they prefer, at that meeting. All of those comments will be considered by the project team and then the project team continues its work to refine that corridor and reach what’s called a Final Environmental Impact Statement and then a Record of Decision from (the) Federal Highway (Administration).”

The ROD is expected to come in the summer of 2021.

You can learn more about the Mid-States Corridor project by clicking here.