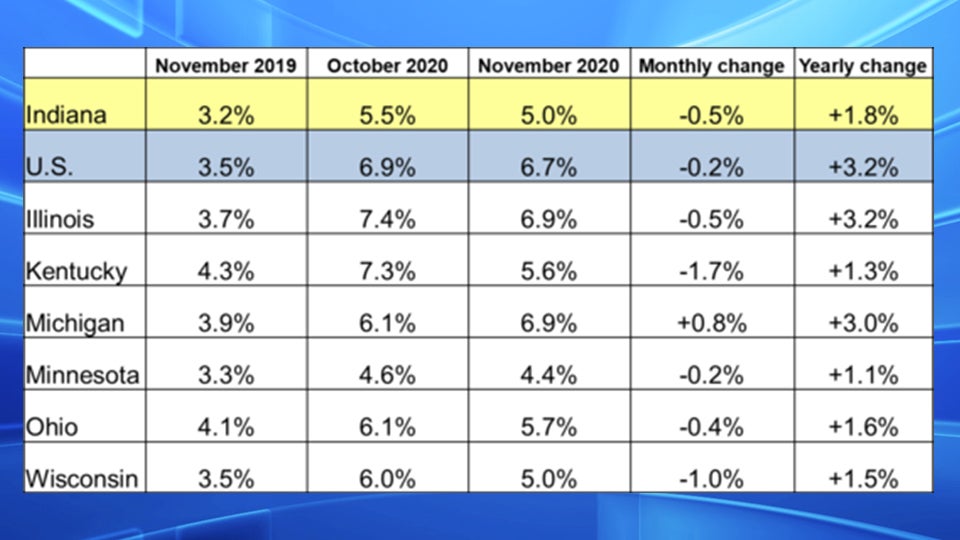 INDIANAPOLIS (Inside INdiana Business) — Indiana is reporting an unemployment rate of 5% for November. The number matches what was originally reported for the previous month, however the October rate was later adjusted up to 5.5%

The Indiana Department of Workforce Development says the state lost about 200 jobs as it continued its recovery from the COVID-19 pandemic.

The state’s unemployment rate remains lower than the national rate, which fell to 6.7% in November.

Figures from the U.S. Bureau of Labor Statistics show Indiana’s labor force saw a net decrease of more than 40,000 over the previous month. The state’s total labor force, which includes Hoosiers who either employed or seeking employment, stands at 3.3 million for November.

The DWD says the decrease in jobs was primarily due to losses in the Professional and Business Services, and Leisure and Hospitality sectors. The state says total private employment stands at more than 2.6 million, which is about 105,000 below the January 2019 peak, and roughly the same as October.

Indiana’s unemployment rate remains the lowest among the surrounding states. Minnesota continues to be the only state in the Midwest with lower unemployment at 4.4%.

Despite the drop in unemployment, the number of Hoosiers filing for initial unemployment insurance claims continued to climb. The state says an average of more than 17,000 initial claims were filed last month.