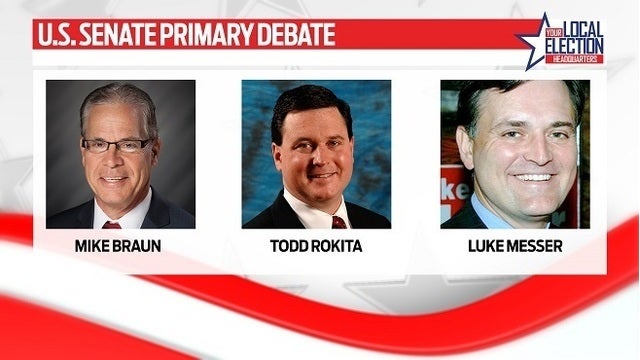 WISH-TV is your local election headquarters.

A live debate of the three Republican candidates for Indiana’s U.S. Senate seat will be broadcast Sunday on WISH-TV and Nexstar’s Indiana family of stations. The one-hour debate will begin at 7 p.m. Sunday. It also will air on WISHTV.com.

Who are businessman Mike Braun, and U.S. Reps. Luke Messer and Todd Rokita? Republican voters will chose one of them to try to unseat Democrat U.S. Sen. Joe Donnelly. The primary election is May 8.

All three candidates went to the same small, liberal-arts college in central Indiana, Wabash College, in Crawfordsville. But after school, their lives took different routes.

Rokita serves the state’s 4th Congressional District. He has been elected to four terms in Congress. Before that, he served as Indiana’s secretary of state from 2003 to 2010.

Rokita and his family live near Brownsburg.

Braun is the founder of Meyer Distributing and owner of Meyer Logistics headquartered in Jasper. He served in the Indiana House of Representatives from 2014 to 2017.

Braun is a Harvard Business School graduate. He and his wife live in Jasper.

Braun previously said, “I am looking forward to another debate to show Hoosiers which candidate is the true conservative and political outsider. We’re proving to Hoosiers everywhere that I am the conservative outsider who will defeat Joe Donnelly in November.”

Messer serves the 6th Congressional District. He has been elected to three terms in Congress. Before that, he served in the Indiana House of Representatives from 2003 to 2006.

A family man as well, Messer is from Greensburg. He also attended Vanderbilt Law School.

Messer has said, “We’re glad to be there when you guys conduct your debate, Frankly, I think voters will see through it if somebody decides they don’t want to show up.”