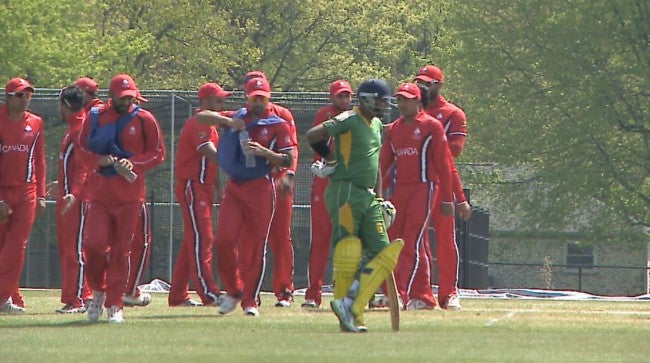 INDIANAPOLIS (WISH) – The second day of an international cricket tournament in Indianapolis will be held Monday morning.

The International Cricket Council (ICC) Americas Division One tournament has brought in teams from across the world to play at the Indianapolis World Sports Park. It’s located off of South Post Road near Brookville Road.

Teams from the United States, Bermuda, Canada and Suriname are competing all week long, with a rest day on Wednesday. The top two teams advance to the ICC World Twenty20 Qualifier 2015 that takes place in Scotland and Ireland this summer.

In all, officials say these teams will play 12 games over six days in Indianapolis. Monday’s games start at 10 a.m. Each game runs about three hours, and they say they’ll typically finish playing by 5 p.m. each night. It is free to the public.

Officials say with this tournament, they’ve booked 700 local hotel rooms and they had 80 international flights coming in to Indy.

Mayor Ballard pushed for the $5 million facility upgrade at the Indianapolis World Sports Park, that can now host not only cricket, but soccer, lacrosse and rugby games as well.

A different tournament was set for August of 2014, but was cancelled.

Some democrats criticized Ballard for spending the money on the fields. Mayor Ballard has said it will bring international exposure and help local companies bring in more people.

Officials say about 30,000 people in the United States play cricket right now. They’re hoping it will continue to gain popularity in the states, as it has elsewhere across the world.

“Cricket is the second most popular sport in the world after soccer, played by the second most amount of people. There are also massive TV audiences. Players in India, for example: the captain there last year, made $30 million. There’s a lot of money to be made, lots of interest, lots of exposure, so we’re hoping, that sort of interest will come across in the United States,” said Kavenagh.

The action starts Monday at 10 a.m. Wednesday is a rest day. They recommend that you bring a chair or a blanket as well.