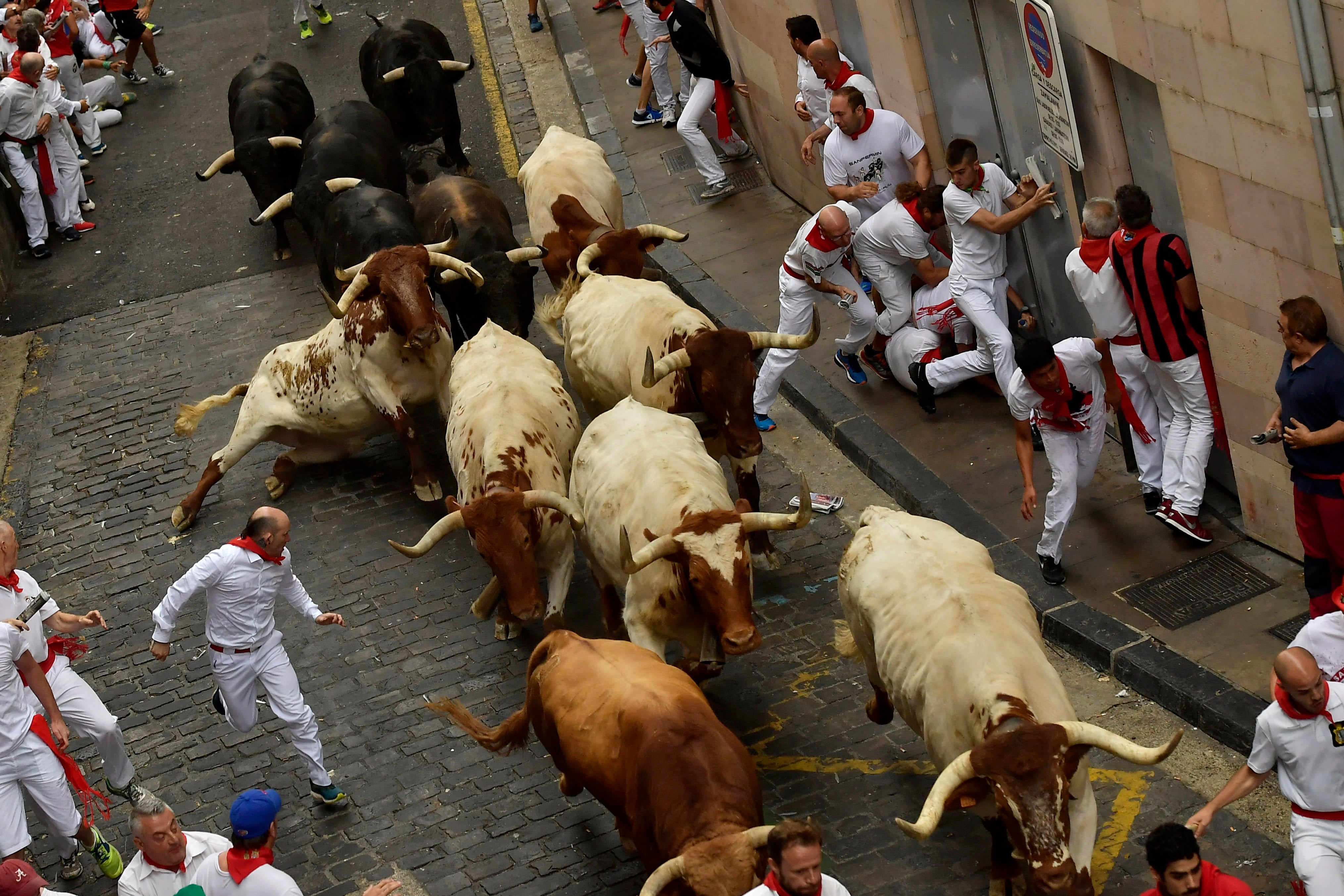 Revellers run next to fighting bulls during the running of the bulls at the San Fermin Festival, in Pamplona, northern Spain, Sunday, July 7, 2019. Revellers from around the world flock to Pamplona every year to take part in the eight days of the running of the bulls. (AP Photo/Alvaro Barrientos)
by:
Posted: Jul 7, 2019 / 07:37 AM EST / Updated: Jul 7, 2019 / 07:38 AM EST

PAMPLONA, Spain (AP) — Five people were hospitalized after the opening bull run of this year’s San Fermin festival in Pamplona, including two Americans and a Spaniard who were gored by bulls, officials in the northern Spanish city said Sunday.

A 46-year old man from San Francisco, California, was gored in the neck in the city’s bullring, at the end of the 850-meter (930-yard) course. He was undergoing surgery, the regional government reported.

A 23-year old man from Florence, Kentucky and a 40-year-old Spanish man were both gored in their thighs. Two young Spanish men sustained head injuries.

The nine-day San Fermin fiesta, where six bulls are run every morning in the city’s narrow streets before being killed in afternoon bullfights, draws around one million visitors annually, including many citizens from the United States. Every year hundreds of “runners” race ahead of or next to the bulls, while the more risk-averse watch from balconies.

Some arrive following in the steps of American novelist and Nobel literature laureate Ernest Hemingway, who became fascinated by bullfighting and immortalized the festival in his 1926 book “The Sun Also Rises.”

The pack dashed together along the cobble-stoned, barricaded street course. Toward the end, one of the bulls stumbled briefly, causing panic and at least one goring when it resumed the race and charged at some of the racers.

The local Red Cross said its emergency personnel had attended to an additional 48 people for minor injuries, including two who had been trampled by the racing bulls.

The run, which lasted 2 minutes and 41 seconds, came after the festival’s official opening — or “Chupinazo” — on Friday, when tens of thousands of party-goers shower each other with wine and champagne in a packed square.