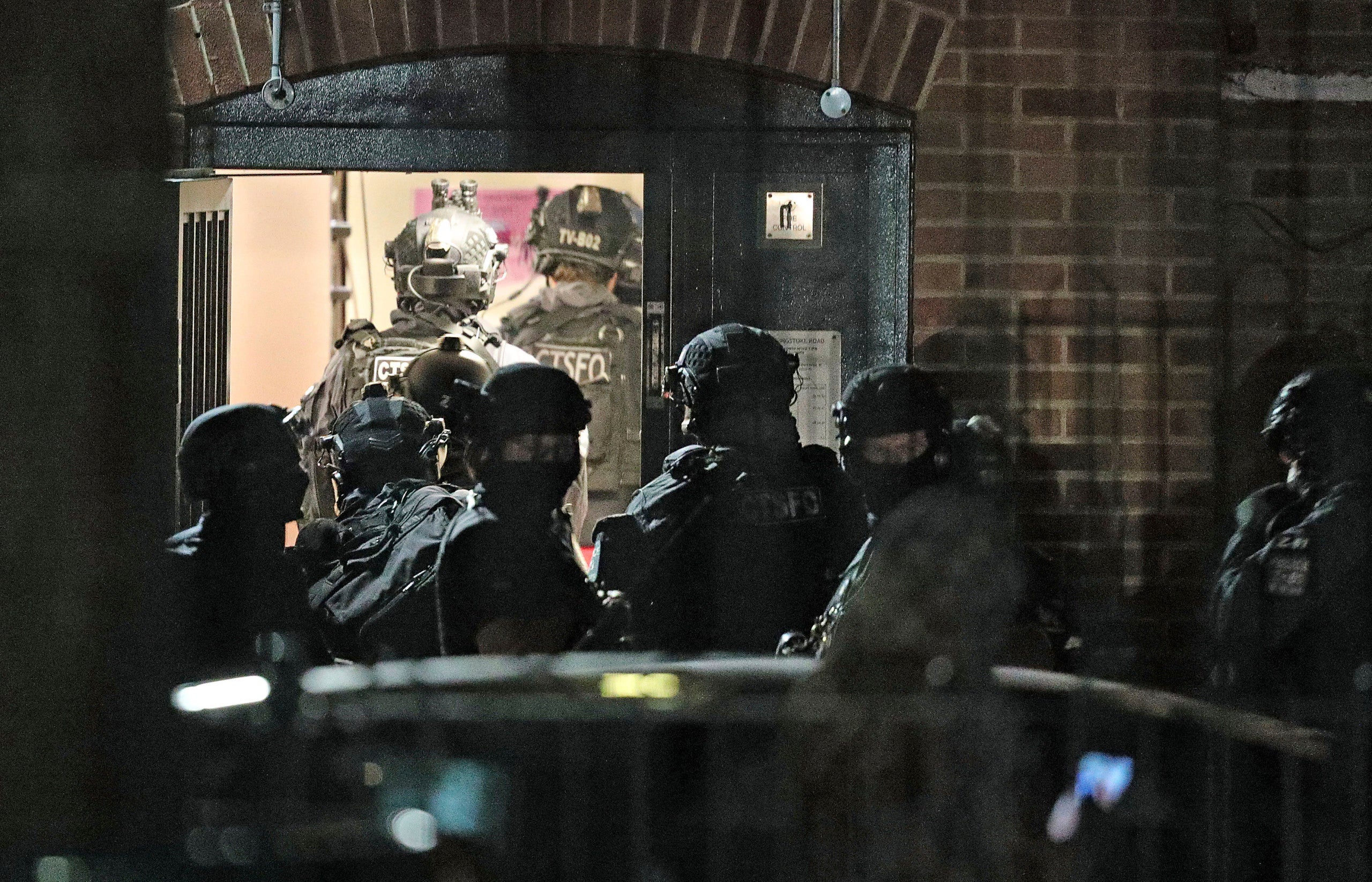 Armed police officers investigate at a block of flats off the Basingstoke Road in Reading after an incident at Forbury Gardens park in the town centre of Reading, England, Saturday, June 20, 2020. Several people were injured in a stabbing attack in a park in the English town of Reading on Saturday, and British media said police were treating it as “terrorism-related.” (Steve Parsons(PA via AP)
by: JILL LAWLESS, Associated Press
Posted: Jun 20, 2020 / 08:57 PM EST / Updated: Jun 20, 2020 / 08:57 PM EST

LONDON (AP) — British police say three people were killed in a summer-evening stabbing attack in a park in the town of Reading, and add that it is “not currently being treated as a terrorist incident.”

Thames Valley Police says three other people are seriously wounded. The force says a 25-year-old man from the town has been arrested and they are not looking for anyone else.

The force says that “officers are keeping an open mind as to the motivation for the incident and are being supported by colleagues from Counter Terrorism Policing South East.”

THIS IS A BREAKING NEWS UPDATE. AN EARLIER VERSION OF THE STORY IS BELOW.

Several people were injured in a stabbing attack in a park in the English town of Reading on Saturday, and British media said police were treating it as “terrorism-related.”

The Press Association news agency and Sky News quoted security sources as saying terrorism was suspected in the early evening attack in the city’s Forbury Gardens park. Police said several people were taken to hospitals but did not confirm media reports that three people had been killed.

Police said one person was arrested and was in custody.

Britain’s interior minister said she was “deeply concerned,” and Prime Minister Boris Johnson said his “thoughts are with all of those affected by the appalling incident in Reading.”

The local Thames Valley Police force tweeted that officers were called to the city’s Forbury Gardens around 7 p.m. It said that “a number of people sustained injuries and were taken to hospital” and one man was arrested at the scene.

The Royal Berkshire Hospital said it was treating two casualties from the incident.

Witnesses reported that police cars and helicopters descended on the park in Reading, a town of about 200,000 residents 40 miles (64 kilometers) west of London. Police blocked off several roads in the city center, and photos showed two air ambulances nearby.

Personal trainer Lawrence Wort said the park was full of groups socializing on the grass when “one lone person walked through, suddenly shouted some unintelligible words and went around a large group of around 10, trying to stab them.”

Home Secretary Priti Patel, Britain’s interior minister, posted on Twitter: “Deeply concerned to hear reports of an incident in Reading. My thoughts are with everyone involved, including police and emergency responders at the scene.”

The incident came hours after a Black Lives Matter demonstration took place at Forbury Gardens, but police said there was “no indication” that the attack was linked to the protest.

Nieema Hassan, one of the organizers of Saturday’s protest, said demonstrators had left by the time the violence occurred. In a social media post, she said she was “praying for the people that are affected. I hope they’re OK.”

Britain’s official terrorism threat level stands at “substantial,” the middle level on a five-rung scale, meaning an attack is likely.

It had previously stood a notch higher, at “substantial,” for several years. The country has been hit by a series of violent attacks in recent years, including a suicide bombing at an Ariana Grande concert in Manchester in 2017 that killed 22 people and two deadly vehicle and knife attacks in London the same year.

Airline worker Carlos Garcia Pascual was walking to his home near Forbury Gardens when emergency vehicles and police officers descended. He said it was “chaos” as police yelled at people to leave the area.

“We didn’t know if it was a situation like like happened in London a few years ago, where the attackers were on the loose,” he said. “Forbury Gardens is a peaceful place, a lot of families go there with their kids to play, picnics. To realize that happened in Forbury Gardens is really hard to believe.”