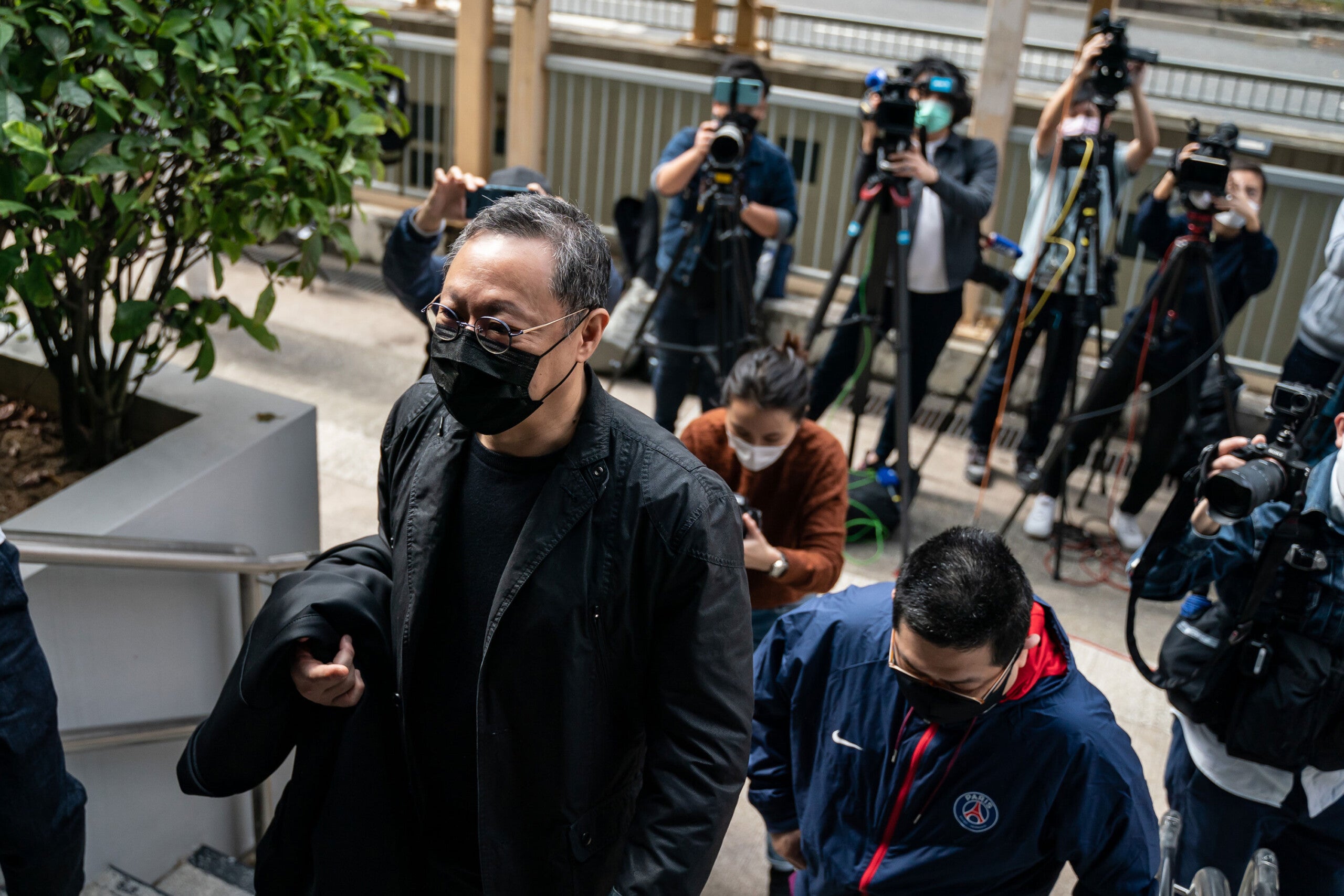 HONG KONG, CHINA - FEBRUARY 28: Benny Tai, associate professor of law at the University of Hong Kong and co-founder of activist group Occupy Central with Love and Peace (OCLP) reports to the Ma On Shan Police Station after being bailed on February 28, 2021 in Hong Kong, China. Over 40 of pro-democracy politicians and activists who were arrested last month under the national security law have been asked to report back to the police on Sunday, weeks ahead of schedule. (Photo by Anthony Kwan/Getty Images)
by: Eric Cheung, Jadyn Sham, Helen Regan, Ally Barnard and James Griffiths, CNN
Posted: Feb 28, 2021 / 07:51 PM EST / Updated: Feb 28, 2021 / 07:52 PM EST

(CNN) — The Hong Kong authorities charged 47 opposition activists with violating the city’s national security legislation on Sunday, in the biggest application of the law since it was imposed by Beijing last year.

Those charged with “conspiracy to commit subversion” were among 53 people — many prominent former lawmakers, activists and district councilors — who were arrested last month for organizing, planning and participating in a primary election for the city’s democratic opposition last July.

That event was designed to identify the strongest pro-democracy candidates to field in legislative council elections planned for last September, when the opposition camp hoped to win an historic majority.

However, those elections were eventually postponed due to the coronavirus pandemic, but not before multiple democracy candidates were disqualified — and warnings made that those participating in the primary could be in breach of the then weeks-old security law.

The 39 men and eight women charged Sunday, aged between 23 and 64, are being detained and will appear at West Kowloon Magistrates’ Courts on Monday. Under their original bail agreements, they weren’t required to check in with police until early April. But earlier this week, the group was asked to report to police on Sunday.

The charges on Sunday mark a sweeping escalation in the application of the national security law, under which previously only a handful of people had been charged and taken to court.

The law criminalizes secession, subversion, terrorism, and collusion with foreign powers, and cases under the legislation can be handled by a dedicated branch of the Hong Kong police and national security courts.

Hong Kong Chief Executive Carrie Lam and others had previously promised the law would be limited in effect, and only target a small number of fringe activists.

The charges come less than a week after the Hong Kong government moved to introduce new requirements for public officials, including that they swear loyalty oaths and embrace Beijing’s rule over the city.

Anyone who fails to take the oath — or is deemed to have done so in an insincere fashion — would be immediately disqualified from office and banned from running in elections for the next five years, Secretary for Constitutional and Mainland Affairs Erick Tsang said.

It came after Hong Kong’s sole delegate to China’s top legislative body said that only “staunch patriots” should be allowed to hold positions of authority in Hong Kong.

The charges are of “great concern to [the] EU,” the European Union Office to Hong Kong and Macau said Sunday.

“Charges against 47 pro-democrat is of great concern to #EU. These make clear that legitimate political pluralism will no longer be tolerated in #HongKong. We urge authorities to abide by their commitments to fundamental #freedoms and the rule of law, as per the #BL and #ICCPR,” the EU office tweeted.

Why punish a primary election?

Primary elections are a normal function in democracies around the world. At the time of the Hong Kong vote, the United States Democratic primary, which Biden won, was still ongoing. The Hong Kong pro-democracy activists have held such votes in the past, in an attempt to match the organization and discipline of the rival pro-Beijing camp and avoid splintering support.

Hong Kong’s Secretary of Security, however, has accused those who organized the July primaries of seeking to “paralyze the Hong Kong government” by winning a majority in the legislature to veto government bills.

Voting against the budget and forcing the chief executive to resign would have been legal prior to the national security law, similar to a “vote of no confidence” that prompts a general election in many democracies. The city’s constitution also contains provisions to deal with such an event, enabling the chief executive to call new legislative elections, and to pass a preliminary budget to enable the government to continue to function.

When dozens of former lawmakers and opposition activists were arrested in January, Anthony Blinken, now the US Secretary of State, said “the sweeping arrests of pro-democracy demonstrators are an assault on those bravely advocating for universal rights.”

“The Biden-Harris administration will stand with the people of Hong Kong and against Beijing’s crackdown on democracy,” Blinken added.

UK Foreign Secretary Dominic Raab warned in January that the British government “will not look the other way when the rights and the autonomy of the people of Hong Kong are trashed.”

“When China first imposed the national security legislation, they said it was to bring some stability to Hong Kong. What is clear from these actions is that actually it is designed to crush political dissent,” Raab told CNN during an interview in London.