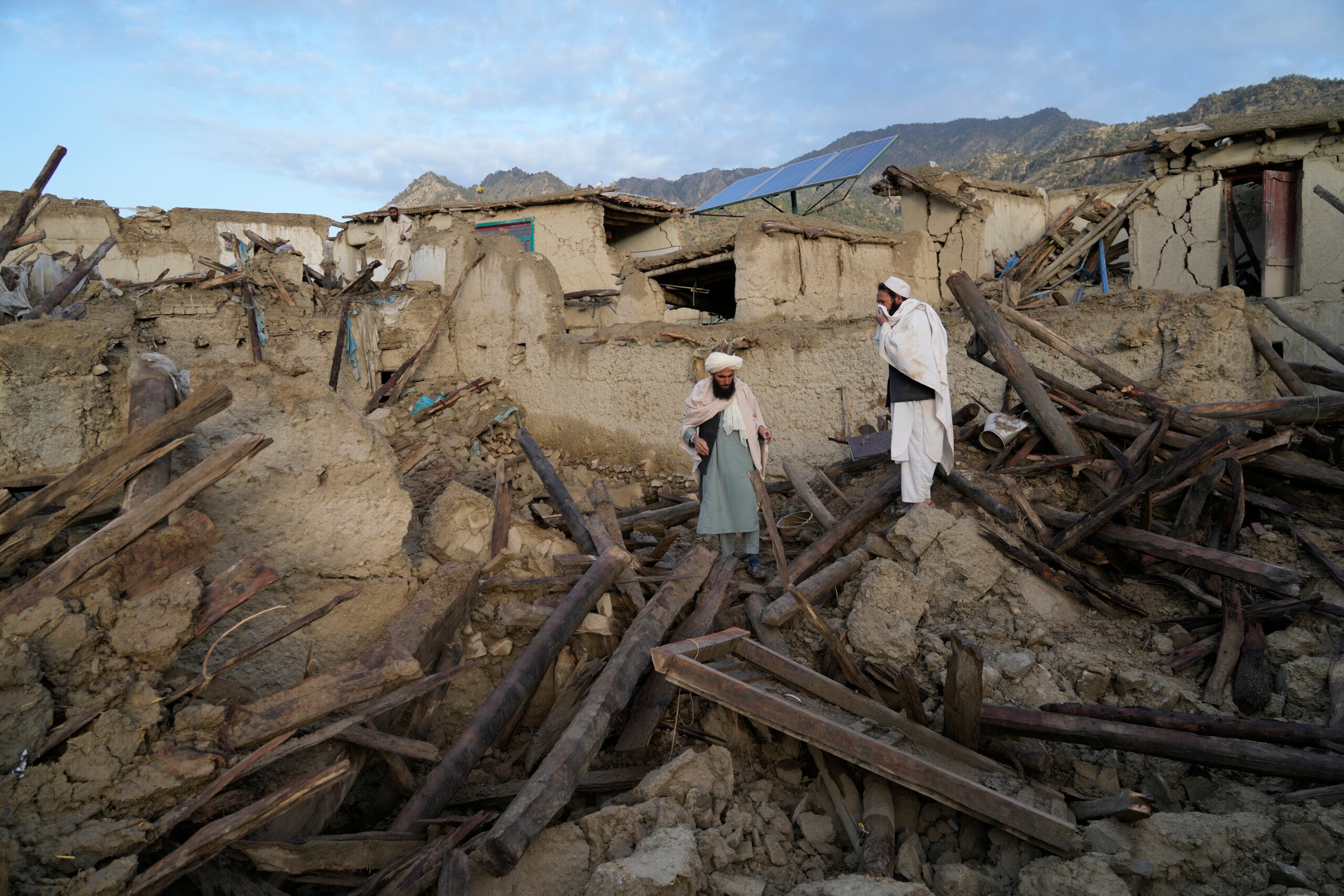 GAYAN, Afghanistan (AP) — Villagers rushed to bury the dead Thursday and dug by hand through the rubble of their homes in search of survivors of a powerful earthquake in eastern Afghanistan that state media reported killed 1,000 people. Residents appeared to be largely on their own to deal with the aftermath as their new Taliban-led government and the international aid community struggled to bring in help.

Under a leaden sky in Paktika province, the epicenter of Wednesday’s earthquake where hundreds of homes have been destroyed, men dug several long trenches on a mountainside overlooking their village. They prayed over around 100 bodies wrapped in blankets and then buried them.

In villages across Gayan District, toured by Associated Press journalists for hours Thursday, families who had spent the previous rainy night out in the open lifted pieces of timber of collapsed roofs and pulled away stones by hand, looking for missing loved ones. Taliban fighters circulated in vehicles in the area, but only a few were seen helping dig through rubble.

There was little sign of heavy equipment — only one bulldozer was spotted being transported. Ambulances circulated, but little other help to the living was evident.

Many international aid agencies withdrew from Afghanistan when the Taliban seized power nearly 10 months ago. Those that remain are scrambling to get medical supplies, food and tents to the remote quake-struck area, using shoddy mountain roads made worse by damage and rains.

“We ask from the Islamic Emirate and the whole country to come forward and help us,” said a survivor who gave his name as Hakimullah. “We are with nothing and have nothing, not even a tent to live in.”

The scenes underscored how the magnitude 6 quake has struck a country that was already nearly on its knees from multiple humanitarian crises.

The quake took the lives of 1,000 people, according to the state-run Bakhtar News Agency, which also reported an estimated 1,500 more were injured. In the first independent count, the United Nations Office for the Coordination of Humanitarian Affairs said around 770 people had been killed in Paktika and neighboring Khost province.

It’s not clear how the totals were arrived at, given the difficulties of accessing and communicating with the affected villages. Either grim toll would make the quake Afghanistan’s deadliest in two decades, and officials continued to warn the number could still rise.

Since the Taliban took over in August amid the U.S and NATO withdrawal, the world pulled back financing and development aid that had been the main thing keeping the country afloat. The economy collapsed, leaving millions unable afford food; many medical facilities shut down, making treatment harder to find. Nearly half the population of 38 million faces crisis levels of food insecurity.

Many aid and development agencies also left after the Taliban seizure of power. The U.N. and remaining agencies said they were moving blankets, food, tents, and medical teams to the area.

But they are over-stretched, and U.N. agencies are facing a $3 billion funding shortfall for Afghanistan this year. Peter Kessler, a spokesman for the United Nations’ refugee agency, said that means there will be difficult decisions about who gets aid.

“The toll this disaster will have on the local communities … is catastrophic, and the impact the earthquake will have on the already stretched humanitarian response in Afghanistan is a grave cause for concern,” Junaid said.

The Defense Ministry, which leads the Taliban emergency effort, said it sent 22 helicopter flights on Wednesday transporting wounded and taking supplies, along with several more Thursday.

Still, the Taliban’s resources have been gutted by the economic crisis. Made up of insurgents who fought for 20 years against the U.S. and NATO, the Taliban have also struggled to make the transition to governing.

On Wednesday, a U.N. official said the government had not requested that the world body mobilize international search-and-rescue teams or obtain equipment from neighboring countries, despite a rare plea from the Taliban’s supreme leader, Haibatullah Akhundzadah, for help from the world.

Trucks of food and other necessities arrived from Pakistan, and planes full of humanitarian aid landed from Iran and Qatar, Taliban spokesman Zabihullah Mujahid wrote on Twitter.

Obtaining more direct international help may be more difficult: Many countries, including the U.S., funnel humanitarian aid to Afghanistan through the U.N. and other such organizations to avoid putting money in the Taliban’s hands, wary of dealing with the group, which has issued a flurry of repressive edicts curtailing the rights of women and girls and the press.

Germany, Norway and several other countries announced they were sending aid for the quake, but underscored that they would work only through U.N. agencies, not with the Taliban.

In a news bulletin Thursday, Afghanistan state television made a point to acknowledge that President Joe Biden of the United States — their one-time enemy — offered condolences over the earthquake and had promised aid. Biden on Wednesday ordered the U.S. international aid agency and its partners to “assess” options for helping the victims, a White House statement said.

U.N. deputy special representative for Afghanistan, Ramiz Alakbarov, told the U.N. Security Council in a video briefing he intends to visit quake-hit areas on Friday and “to meet with affected families, first-hand responders, including women’s civil society groups who are working to ensure that assistance reaches women and girls, and to support overall relief efforts.”

In Paktika province, the quake shook a region of deep poverty, where residents scrape out in a living in the few fertile areas among the rough mountains. Roads are so difficult that some villages in Gayan District took a full day to reach from Kabul, though it is only 175 kilometers (110 miles away.)

One 6-year-old boy in Gayan wept as he said his parents, two sisters and a brother were all dead. He had fled the ruins of his own home and took refuge with the neighbors.

One man, Rahim Jan, stood inside the few standing mud-brick walls of his home with the toppled roof timbers all around him.

“It is destroyed completely, all my belongings are gone,” he said. “I have lost 12 members of my family in this house.”