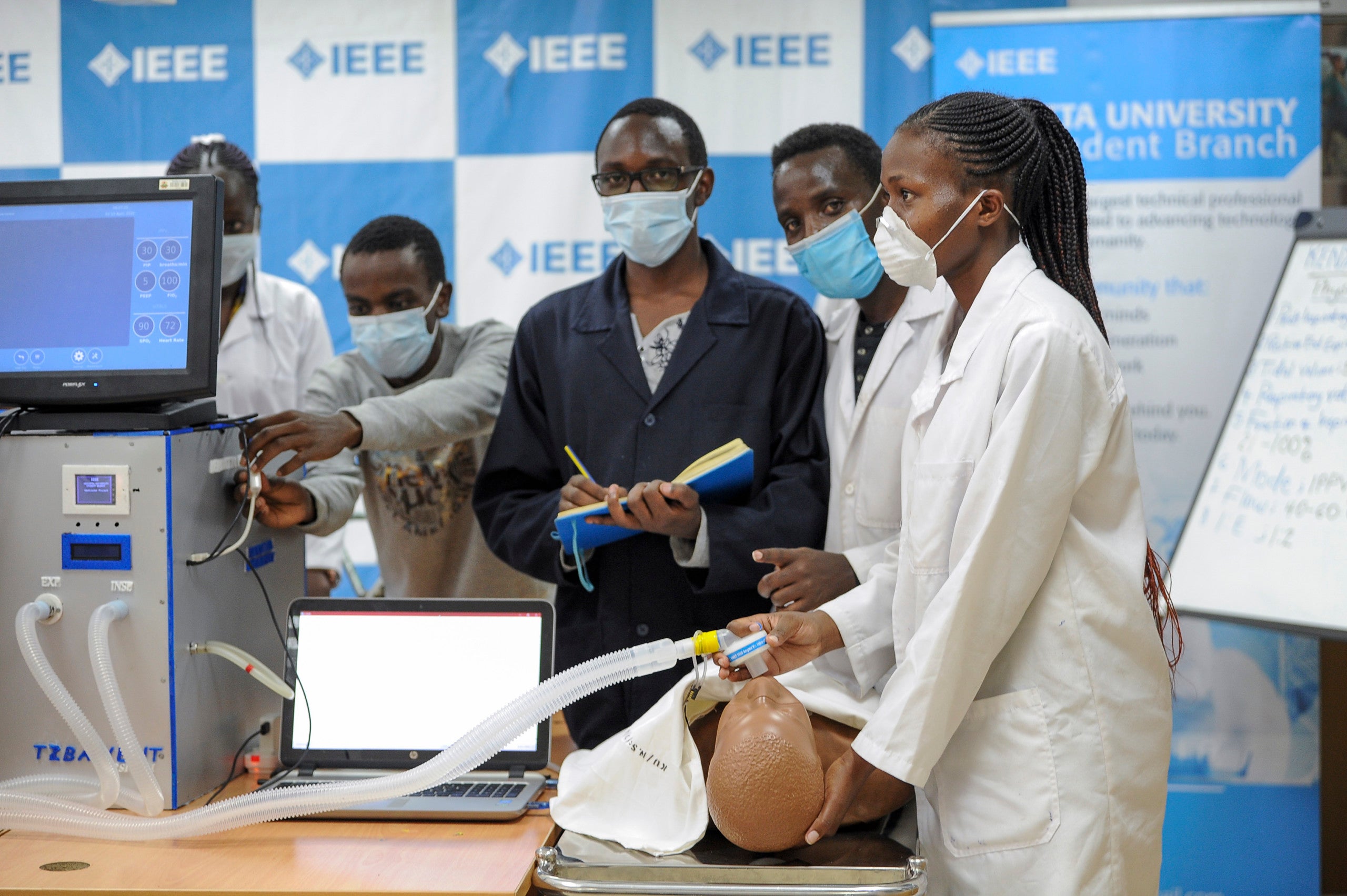 FILE - In this Monday, April 13, 2020 file photo, medical students test a self-designed computer-controlled ventilator prototype at the Chandaria Business and Incubation Centre of Kenyatta University in Nairobi, Kenya. More than two dozen international aid organizations have told the U.S. government they are "increasingly alarmed" that "little to no U.S. humanitarian assistance has reached those on the front lines" of the coronavirus pandemic as the number of new cases picks up speed in some of the world's most fragile regions. (AP Photo/John Muchucha, File)
by: CARA ANNA Associated Press
Posted: Jun 12, 2020 / 05:37 AM EST / Updated: Jun 12, 2020 / 05:37 AM EST

JOHANNESBURG (AP) — More than two dozen international aid organizations have told the U.S. government they are “increasingly alarmed” that “little to no U.S. humanitarian assistance has reached those on the front lines” of the coronavirus pandemic, as the number of new cases picks up speed in some of the world’s most fragile regions.

The letter obtained by The Associated Press and signed by groups including Save the Children, Mercy Corps, World Vision and others says that “in spite of months of promising conversations with USAID field staff, few organizations have received an executed award for COVID-19 humanitarian assistance.”

It calls the delays “devastating” and says the window is closing for the U.S. to help mitigate the worst impacts of the pandemic around the world.

The letter to U.S. Agency for International Development acting administrator John Barsa is dated June 4 — the same day that other USAID officials were touting the U.S. government’s “global leadership” in the face of the COVID-19 pandemic.

“To date, we have committed more than $1 billion to benefit the global COVID response,” Kenneth Staley, the leader of the USAID COVID-19 task force, told reporters covering Africa.

But much of that aid has been tied up in “uncharacteristic delays” nearly three months after the passage of the Coronavirus Preparedness and Response Supplemental Appropriations Act, the letter from aid groups says.

“The long delays in COVID-19 awards — and as a result, U.S. response to a dynamic global emergency — stands in stark contrast to our experience in crises where (the Office of U.S. Foreign Disaster Assistance) is known to turn around funding in a matter of weeks, if not days,” the letter says.

The letter makes clear the aid problem is a global one, pointing out the exponential rise in cases in Pakistan, and saying “the time to move is now.”

For months while promoting U.S. coronavirus assistance, U.S. officials have not given details on the number of crucial items — such as ventilators and testing kits — delivered to countries in Africa, where such equipment has been in short supply for months. And the need is growing.

Just 3 million tests for the virus have been conducted across Africa, a continent of 1.3 billion people, far short of the goal of testing at least 1% of that population, or 13 million. “One of the biggest challenges we face in the response continues to be the availability of supplies, particularly test kits,” WHO Africa chief Matshidiso Moeti told reporters on Thursday.

President Donald Trump in recent weeks has spoken of deliveries of ventilators to African countries, saying 1,000 of the machines were being sent to Nigeria alone. But Nigeria’s government has said none has arrived.

In fact, just 50 ventilators have arrived in Africa from the U.S. government, all of them going to South Africa in recent days. That country has about a quarter of Africa’s virus cases.

A State Department official on Thursday said the U.S. has pledged ventilator assistance to Congo, Ethiopia, Ghana, Kenya, Mozambique, Nigeria and Rwanda as well. The U.S. is supplying ventilators as soon as the domestic supply chain and vendors can produce and deliver orders, the official said.

Some African officials have expressed open dismay or signaled quiet frustration over the U.S. government’s response. Others have called for a “Made in Africa” push to reduce reliance on imports, amid efforts across the continent to create homemade ventilators and repurpose factories.

The Africa Centers for Disease Control and Prevention has been quick to praise assistance from the Jack Ma Foundation and others for deliveries of ventilators, testing kits and other badly needed items.

But asked about just how many of those items the U.S. has delivered, Africa CDC chief John Nkengasong on Thursday said that “unfortunately, I cannot give you a number … It has been a challenging time for many countries to fight their own pandemic.”