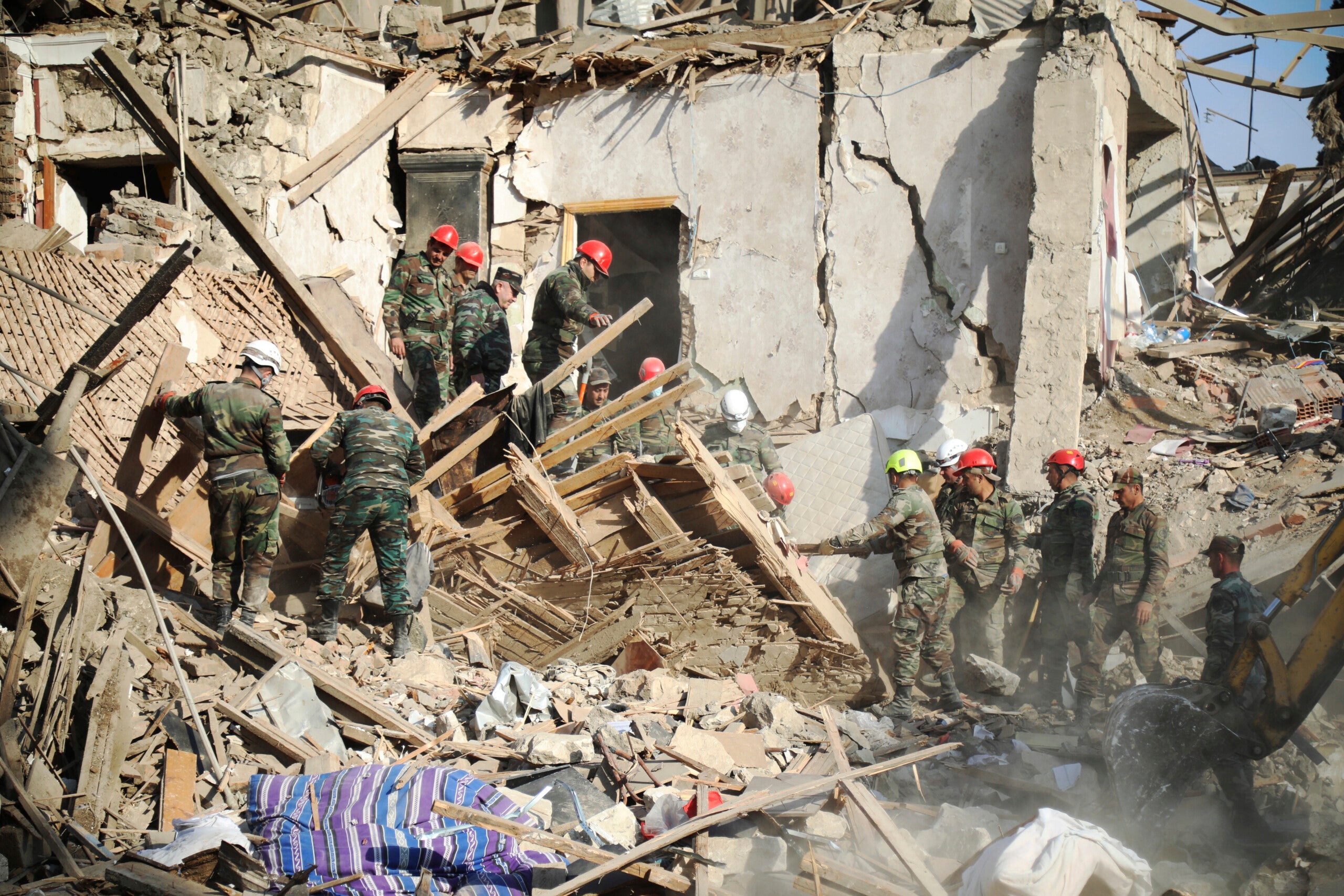 Rescuers work at the scene of damage after shelling by Armenian's artillery during fighting over the separatist region of Nagorno-Karabakh, in Ganja, Azerbaijan, Sunday, Oct. 11, 2020. Azerbaijan has accused Armenia of attacking large cities overnight in violation of the cease-fire deal brokered by Russia that seeks to end the worst outbreak of hostilities in the separatist Nagorno-Karabakh region. The Azerbaijani authorities said Sunday that nine civilians have been killed and over 30 wounded after Armenian forces fired missiles overnight on Ganja, Azerbaijan's second-largest city, and hit a residential building. (AP Photo/Aziz Karimov)
by: Associated Press
Posted: Oct 12, 2020 / 06:42 AM EST / Updated: Oct 12, 2020 / 06:42 AM EST

YEREVAN, Armenia (AP) — Armenia and Azerbaijan on Monday accused each other of attacks over the separatist territory of Nagorno-Karabakh despite a cease-fire deal brokered by Russia in an effort to end the worst outbreak of hostilities in the region in decades.

The cease-fire came into effect on Saturday, but was immediately challenged by mutual claims of violations that persisted throughout the weekend and continued on Monday morning.

Azerbaijan’s Defense Ministry, meanwhile, insisted that Azerbaijan was observing the cease-fire but accused Armenian forces of shelling the Goranboy, Terter and Agdam regions of Azerbaijan that lie around Nagorno-Karabakh.

The recent bout of fighting between Azerbaijani and Armenian forces started Sept. 27 and has left hundreds of people dead in the biggest escalation of the decades-old conflict over Nagorno-Karabakh since a separatist war there ended in 1994. The region lies in Azerbaijan but has been under control of ethnic Armenian forces backed by Armenia.

The foreign ministers of Armenia and Azerbaijan signed a truce in Moscow after Russian President Vladimir Putin had brokered it in a series of calls with Azerbaijani President Ilham Aliyev and Armenian Prime Minister Nikol Pashinian.

The cease-fire took effect at noon Saturday, after talks in Moscow that were sponsored by Russian Foreign Minister Sergey Lavrov. The deal stipulated that the cease-fire should pave the way for talks on settling the conflict.

If the truce had held, it would have marked a major diplomatic coup for Russia, which has a security pact with Armenia but has also cultivated warm ties with Azerbaijan.