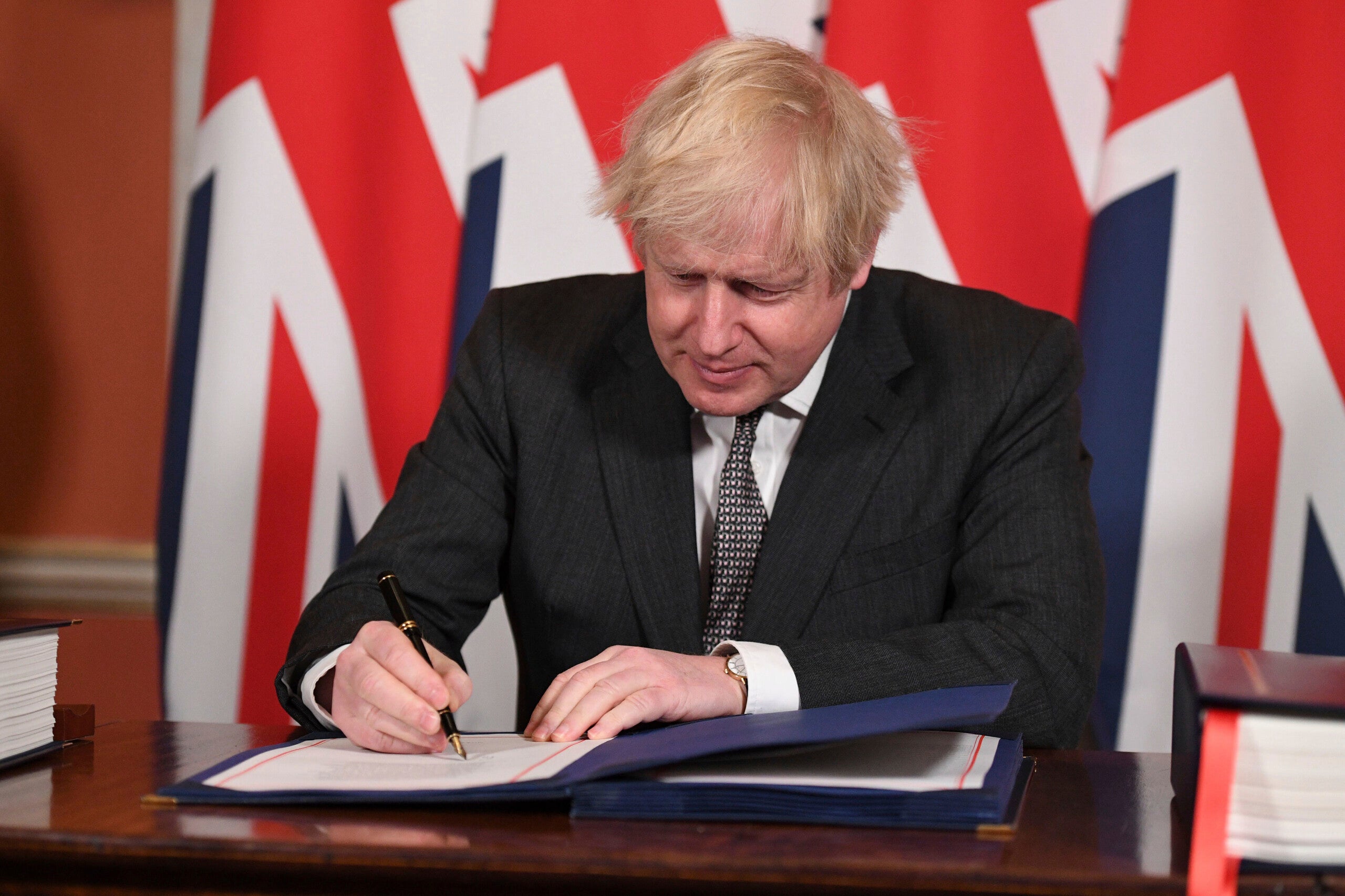 Britain's Prime Minister Boris Johnson signs the EU-UK Trade and Cooperation Agreement at 10 Downing Street, London Wednesday Dec. 30, 2020. The U.K. left the EU almost a year ago, but remained within the bloc’s economic embrace during a transition period that ends at midnight Brussels time —- 11 p.m. in London — on Thursday. European Commission President Ursula von der Leyen and European Council President Charles Michel signed the agreement during a brief ceremony in Brussels on Wednesday morning then the documents were flown by Royal Air Force plane to London for Johnson to add his signature. (Leon Neal/Pool via AP)
by: JILL LAWLESS Associated Press
Posted: Dec 31, 2020 / 08:08 AM EST / Updated: Dec 31, 2020 / 08:08 AM EST

LONDON (AP) — Like a separated couple still living together, Britain and the European Union spent 2020 wrangling and wondering whether they can still be friends.

On Thursday, the U.K. is finally moving out. At 11 p.m. London time — midnight in Brussels — Britain will economically and practically leave the the 27-nation bloc, 11 months after its formal political departure.

After more than four years of Brexit political drama, the day itself is something of an anticlimax. Lockdown measures to curb the coronavirus have curtailed mass gatherings to celebrate or mourn the moment, though Parliament’s huge Big Ben bell will sound the hour as it prepares to ring in the New Year.

British Prime Minister Boris Johnson — for whom Thursday represents the fulfilment of his promise to “Get Brexit Done” — said the day “marks a new beginning in our country’s history and a new relationship with the EU as their biggest ally.”

“This moment is finally upon us and now is the time to seize it,” he said after Britain’s Parliament approved a U.K.-EU trade deal overnight, the final formal hurdle on the U.K. side before departure.

It has been 4 1/2 years since Britain voted in a referendum to leave the bloc it joined in 1973. The U.K. left the EU’s political structures on Jan. 31 of this year, but the real repercussions of that decision have yet to be felt, since the U.K.’s economic relationship with the bloc remained unchanged during an 11-month transition period that ends Thursday.

After that, Britain will leave the EU’s vast single market and customs union — the biggest single economic change the country has experienced since World War II.

A free trade agreement sealed on Christmas Eve after months of tense negotiations will ensure Britain and the 27-nation EU can continue to trade in goods without tariffs or quotas. That should help protect the 660 billion pounds ($894 billion) in annual trade between the two sides, and the hundreds of thousands of jobs that rely on it.

But firms face sheaves of new paperwork and expenses. Traders are struggling to digest the new rules imposed by a 1,200-page deal that was agreed just a week before the changes take place.

The English Channel port of Dover and the Eurotunnel passenger and freight route are bracing for delays, though the pandemic and the holiday weekend mean there will be less cross-Channel traffic than usual. The vital supply route was snarled for days after France closed its border to U.K. truckers for 48 hours last week in response to a fast-spreading variant of the virus identified in England.

For now, freight companies are holding their breath. U.K. haulage firm Youngs Transportation is suspending services to the EU from Monday until Jan. 11 “to let things settle.”

“We figure it gives the country a week or so to get used to all of these new systems in and out and we can have a look and hopefully resolve any issues in advance of actually sending our trucks,” said Youngs director Rob Hollyman.

The services sector, which makes up 80% of Britain’s economy, doesn’t even know what the rules will be for business with the EU in 2021 — many of the details have yet to be hammered out. Months and years of further discussion and argument lie ahead as Britain a nd the EU settle in to their new relationship as friends, neighbors and rivals.

Hundreds of millions of individuals in Britain and the bloc also face changes to their daily lives. After Thursday, Britons and EU citizens lose the automatic right to live and work in the other’s territory. From now on they will have to follow immigration rules and obtain work visas. Tourists won’t need visas for short trips, but new headaches — from travel insurance to pet paperwork — still loom for Britons visiting the continent.

For some in Britain, including the prime minister, it’s a moment of pride, a reclaiming of national sovereignty from a vast Brussels bureaucracy.

For others it’s a time of loss.

Roger Liddle, an opposition Labour Party member of the House of Lords, said Brexit severed Britain from “the most successful peace project in history.”

“Today is a victory for a poisonous nationalistic populism over liberal rules-based internationalism and it’s a very bad, and for me very painful, day,” he said.

That sentiment was echoed by France’s Europe minister, Clément Beaune.

“But we also have to look toward the future. A number of lessons must be drawn from Brexit, starting with lies, I think, that were told to the British. And we will see that what was promised — a sort of total freedom, a lack of restrictions, of influence — I think will not happen.”