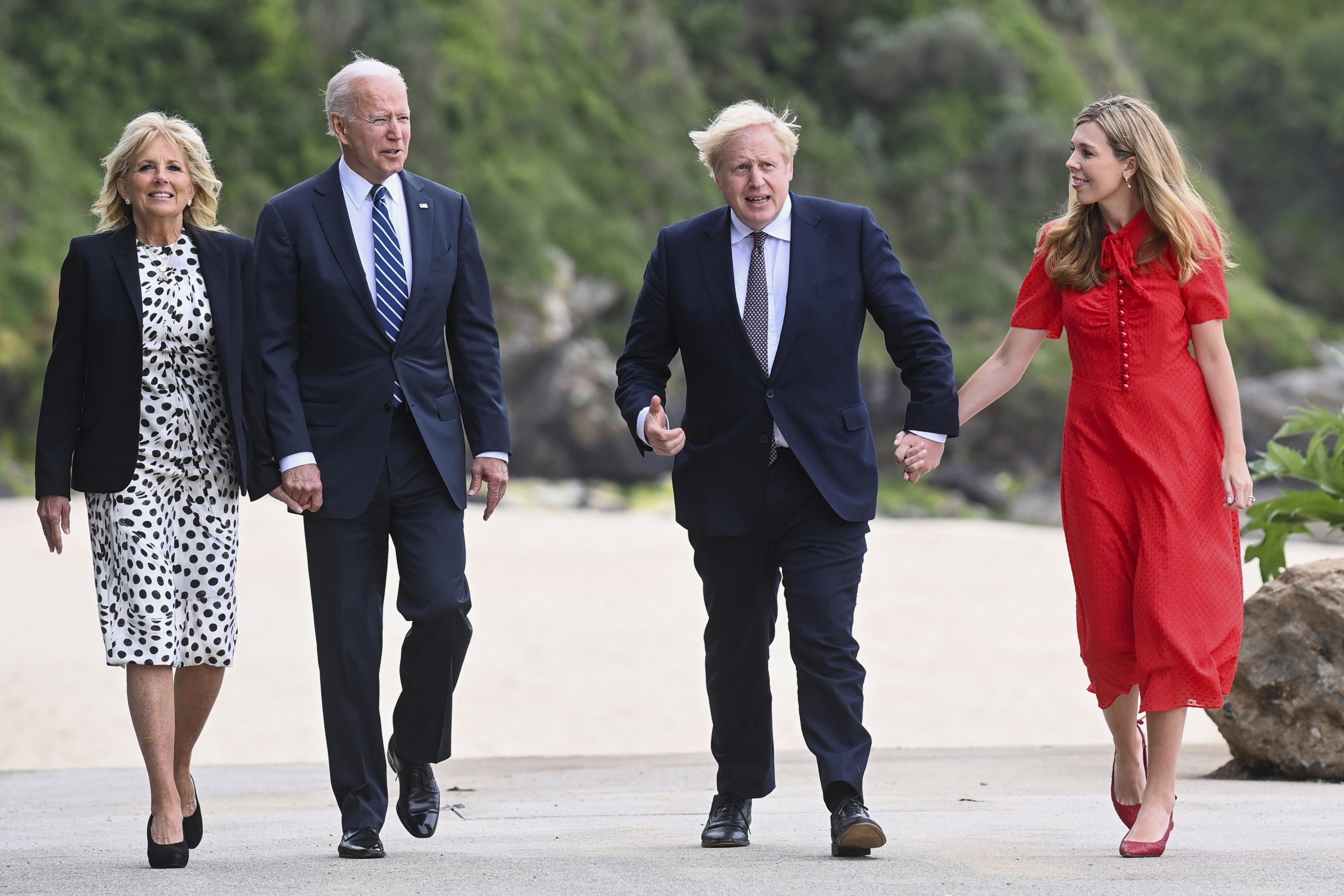 CARBIS BAY, England (AP) — President Joe Biden and British Prime Minister Boris Johnson met for the first time Thursday, looking to highlight their nations’ famed “special relationship” but doing so against a backdrop of differences both political and personal.

Biden hopes to use his first overseas trip as president to reassure European allies that the United States had shed the transactional tendencies of Donald Trump’s term and is a reliable partner again. But tensions could simmer beneath the surface of Biden’s meeting with Johnson.

The president staunchly opposed the Brexit movement, the British exodus from the European Union that Johnson championed, and has expressed great concern with the future of Northern Ireland. And Biden once called the British leader a “physical and emotional clone” of Trump.

The British government has worked hard to overcome that impression, stressing Johnson’s common ground with Biden on issues such as climate change and his support for international institutions. But Johnson, the host for the Group of Seven summit that will follow his sit-down with Biden, has been frustrated by the lack of a new trade deal with the United States.

The leaders had planned to visit the spectacular island of St. Michael’s Mount but the trip was scrapped because of bad weather. Instead, they met above the beach at the G-7 site in Carbis Bay, staring out at the ocean while trading pleasantries.

Both couples — Johnson is newly married — held hands as they walked. First lady Jill Biden’s black jacket had “LOVE” embroidered on the upper back — a fashion move that recalled her predecessor Melania Trump’s decision to wear a jacket with “I really don’t care, do u?” on the back during a 2018 trip to a Texas border town.

Both sides have stressed that, publicly, the Biden-Johnson meeting would be about reaffirming ties between longtime allies in a week in which Biden will look to rally the West to rebuff Russian meddling and publicly demonstrate it can compete economically with China.

National security adviser Jake Sullivan described Biden’s initial calls with Johnson as “warm” and “constructive” and played down any differences between the two nations’ goals.

“They’ve been very much down to business,” Sullivan said at the White House this week. “And I expect that their meeting together will just cover the waterfront. I mean, really, a wide range of issues where the two of them and the U.S and United Kingdom do see eye to eye.”

Biden, who is fiercely proud of his Irish roots, has warned that nothing should undermine Northern Ireland’s 1998 Good Friday peace accord. Some on the British side have viewed Biden warily because of his heritage. White House officials have said the United States does not plan to be involved in the negotiations and that Biden would not lecture Johnson but would urge that a resolution be reached expeditiously.

After Brexit, a new arrangement was needed for the border between Northern Ireland, which is part of the United Kingdom, and Ireland, because the European Union requires certain goods to be inspected and others not to be admitted at all. Ahead of a June 30 deadline, ongoing negotiations over goods — including sausages — have been contentious and have attracted the attention of the White House.

“President Biden has been crystal clear about his rock-solid belief in the Good Friday Agreement as the foundation for peaceful coexistence in Northern Ireland,” Sullivan told reporters aboard Air Force One as Biden flew to England on Wednesday. “Any steps that imperil or undermine it will not be welcomed by the United States.”

The two leaders also were expected to discuss climate change, the coronavirus pandemic, creating an infrastructure financing program for developing countries, Afghanistan and a refresher of the 80-year-old Atlantic Charter between the two nations, Sullivan said. There were also plans to launch a bilateral commission to research and defeat cancer.

The new charter — which will include the efforts to resume travel — will be modeled on the historic joint statement made by Prime Minister Winston Churchill and President Franklin D. Roosevelt in 1941 setting out goals for the postwar world. White House officials suggested that it not be read as another Cold War-era document but a pathway for an increasingly complex, interconnected globe.

But Trump’s presence was still likely to be felt on Thursday. Johnson and Trump, for a time, appeared to be kindred spirits, both riding a wave of populism that in 2016 delivered Brexit and upended the American political landscape.

Biden, for his part, has expressed a mistrust of Johnson, who once unspooled a Trump-like insult of President Barack Obama, saying that Biden’s former boss was “half-Kenyan” and had an ancestral dislike of Britain.

“Did Donald Trump irrevocably damage relations with Europe? I think the answer to that is no,” said Thomas Gift, director of the Centre on U.S. Politics at University College London. “But I do think that it created some challenges that Biden is going to have to overcome.”

Since World War II, the trans-Atlantic “special relationship” has been sustained by a common language, shared interests, military cooperation and cultural affection. Sometimes that has been bolstered by close personal bonds, such as the friendship between Margaret Thatcher and Ronald Reagan in the 1980s, or between Tony Blair and Bill Clinton in the 1990s.

It has endured even when leaders’ relations were less cordial, as when British Prime Minister Harold Wilson refused to join the Vietnam War in the 1960s.

“There is far more that unites the government of this country and government in Washington any time, any stage, than divides us,” Johnson told The Associated Press in a recent interview.

Brexit may test those bonds. The U.S. still values Britain’s role as a European economic and military power and a member of the intelligence-sharing “Five Eyes” alliance. But Biden has made clear that he intends to rebuild bridges with the EU, a frequent target of Trump’s ire. That suggests Berlin, Brussels and Paris, rather than London, will be uppermost in his thoughts.

Britain had been hoping to secure a quick trade agreement with the U.S. after its official departure from the EU in January. The change in administration in Washington leaves prospects of a deal uncertain.

And there may be one more, though admittedly small, obstacle to nurturing the “special relationship” — the very phrase itself.

Johnson has said he did not appreciate “special relationship,” used by the U.S. president, because to the prime minister it seemed needy and weak. Johnson’s spokesperson said this week: “The prime minister is on the record previously saying he prefers not to use the phrase, but that in no way detracts from the importance with which we regard our relationship with the U.S., our closest ally.”

Inside INdiana Business / 29 seconds ago