Blinken: US will aid Gaza without helping Hamas 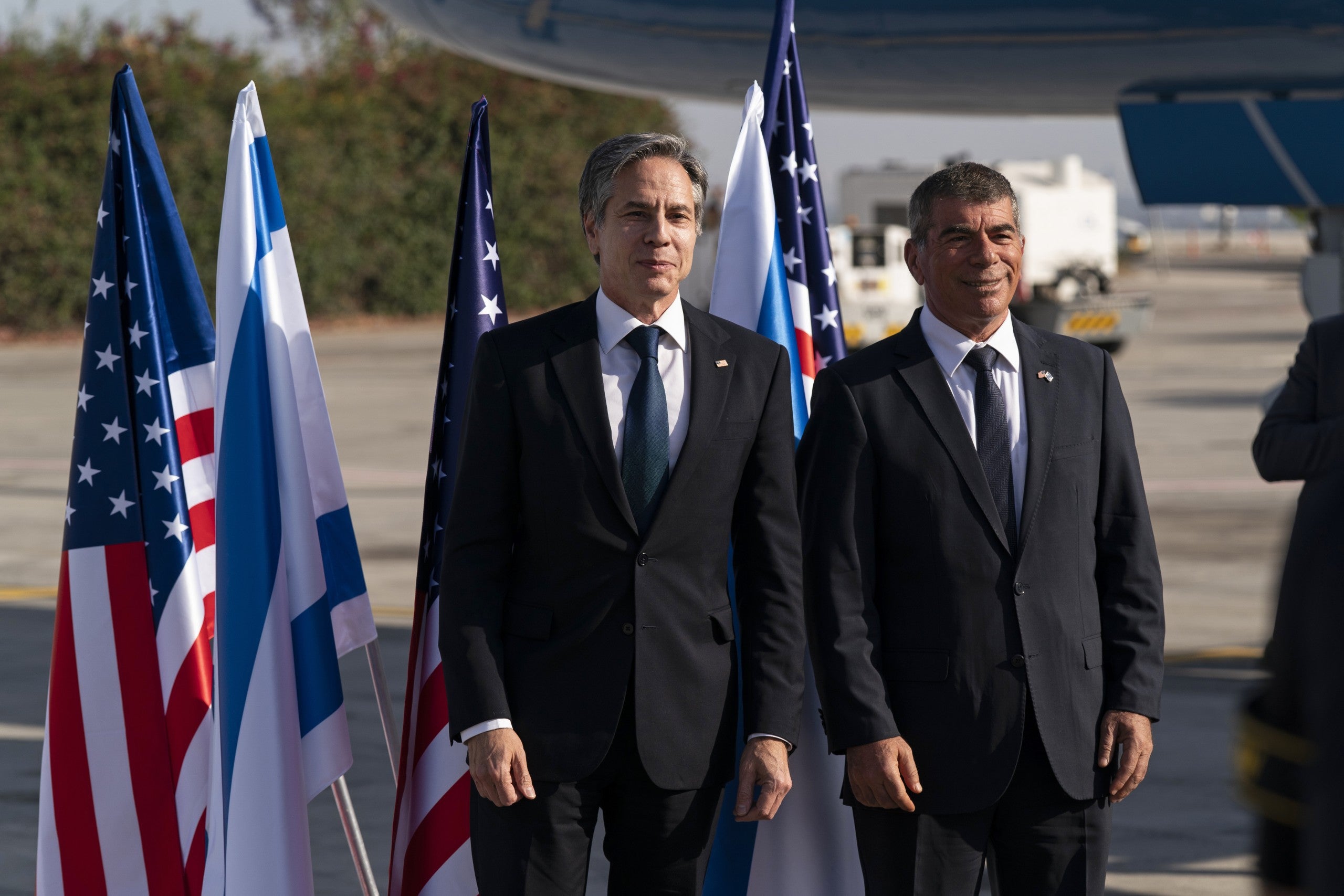 Secretary of State Antony Blinken, left, stands with Israeli Foreign Minister Gabi Ashkenazi, upon arrival at Tel Aviv Ben Gurion Airport, Tuesday, May 25, 2021, in Tel Aviv, Israel. Blinken has arrived in Israel at the start of a Middle East tour aimed at shoring up the Gaza cease-fire. (AP Photo/Alex Brandon, Pool)
by: JOSEPH KRAUSS Associated Press
Posted: May 25, 2021 / 05:51 AM EST / Updated: May 25, 2021 / 05:52 AM EST

Blinken, who spoke after meeting with Israeli Prime Minister Benjamin Netanyahu, said the U.S. would work to address the “grave humanitarian situation” in the coastal territory but would also ensure that Gaza’s militant Hamas rulers do not benefit from reconstruction assistance.

The truce that came into effect Friday has so far held, but it did not address any of the underlying issues.

On his tour of the region, Blinken will face the same obstacles that have stifled a wider peace process for more than a decade, including a hawkish Israeli leadership, Palestinian divisions and deeply rooted tensions surrounding Jerusalem and its holy sites.

Blinken, who landed at Ben Gurion International Airport early Tuesday, is the highest-ranking U.S. official to visit the region since U.S. President Joe Biden assumed office. He was welcomed on the tarmac by Israeli Foreign Minister Gabi Ashkenazi and other officials.

The administration had hoped to extricate the U.S. from the region’s intractable conflicts and focus on competition with China and climate change. But like so many of its predecessors, it was pulled back into the Middle East by another outbreak of violence.

He will begin his visit in Israel, where Prime Minister Benjamin Netanyahu is fighting for his political life after a fourth inconclusive election in two years. Netanyahu faces mounting criticism from Israelis who say he ended the offensive prematurely, without forcibly halting Palestinian rocket attacks or dealing a heavier blow to Gaza’s militant Hamas rulers.

The war was triggered by weeks of clashes in Jerusalem between Israeli police and Palestinian protesters in and around the Al-Aqsa Mosque compound, a flashpoint holy site. The protests were directed at Israel’s policing of the area during the Muslim holy month of Ramadan and the threatened eviction of dozens of Palestinian families by Jewish settlers.

The evictions were put on hold just before the Gaza fighting erupted, but the legal process is set to resume in the coming weeks. Police briefly clashed with protesters at Al-Aqsa on Friday, hours after the cease-fire came into effect. The site is revered by Jews and Muslims, and has seen several outbreaks of Israeli-Palestinian violence over the years.

Netanyahu is unlikely to make any public concessions on Al-Aqsa or the evictions because it would be seen as giving in to Hamas’ demands.

Adding to the tensions, an Israeli soldier and a civilian were stabbed and wounded in east Jerusalem on Monday before police shot and killed the assailant in what they described as a terrorist attack.

A Palestinian man was shot and killed by undercover Israeli forces early Tuesday near Ramallah, where the Palestinian Authority is headquartered, according to the PA’s official Wafa news agency. Pictures circulating online appeared to show the man, identified as Ahmed Jamil Fahed, bloodied and lying in the street. The Israeli army referred questions to the Border Police, which did not respond to requests for comment.

Blinken will not be meeting with the other party to the war, the Islamic militant group Hamas, which does not recognize Israel’s right to exist.

Instead, he will head to Ramallah, in the occupied West Bank, to meet with Palestinian President Mahmoud Abbas, who has no power in Gaza and was sidelined by recent events.

Abbas, who called off the first Palestinian elections in 15 years last month when it appeared his fractured Fatah movement would suffer an embarrassing defeat, is seen by many Palestinians as having lost all legitimacy. A crowd of worshippers at Al-Aqsa chanted against his Palestinian Authority and in support of Hamas on Friday.

But Abbas is still seen internationally as the representative of the Palestinian people and a key partner in the long-defunct peace process.

Blinken will also visit neighboring Egypt and Jordan, which made peace with Israel decades ago and have acted as mediators in the conflict. Egypt succeeded in brokering the Gaza truce after the Biden administration pressed Israel to wind down its offensive.

The administration had been roundly criticized for its perceived hands-off initial response to the deadly violence, including from Democratic allies in Congress who demanded it take a tougher line on Israel. Biden repeatedly affirmed what he said was Israel’s right to defend itself from rocket attacks from Gaza.

The administration has defended its response by saying it engaged in intense, but quiet, high-level diplomacy to support a cease-fire.

In an interview with CNN over the weekend, Blinken said the administration is now focused on trying to “build something more positive,” saying Palestinians and Israelis deserve “equal measures of opportunity, of security, of dignity.”

He said the time is not right for an immediate resumption in negotiations, but that steps could be taken to repair the damage from Israeli airstrikes, which destroyed hundreds of homes and damaged infrastructure in Gaza.

The narrow coastal territory, home to more than 2 million Palestinians, has been under a crippling Israeli-Egyptian blockade since Hamas seized power from Abbas’ forces in 2007. Israel says the blockade is needed to keep Hamas from importing arms, while the Palestinians and human rights groups view it as a form of collective punishment.