Boy, 9, with cerebral palsy completes marathon on his walker, half a mile at a time 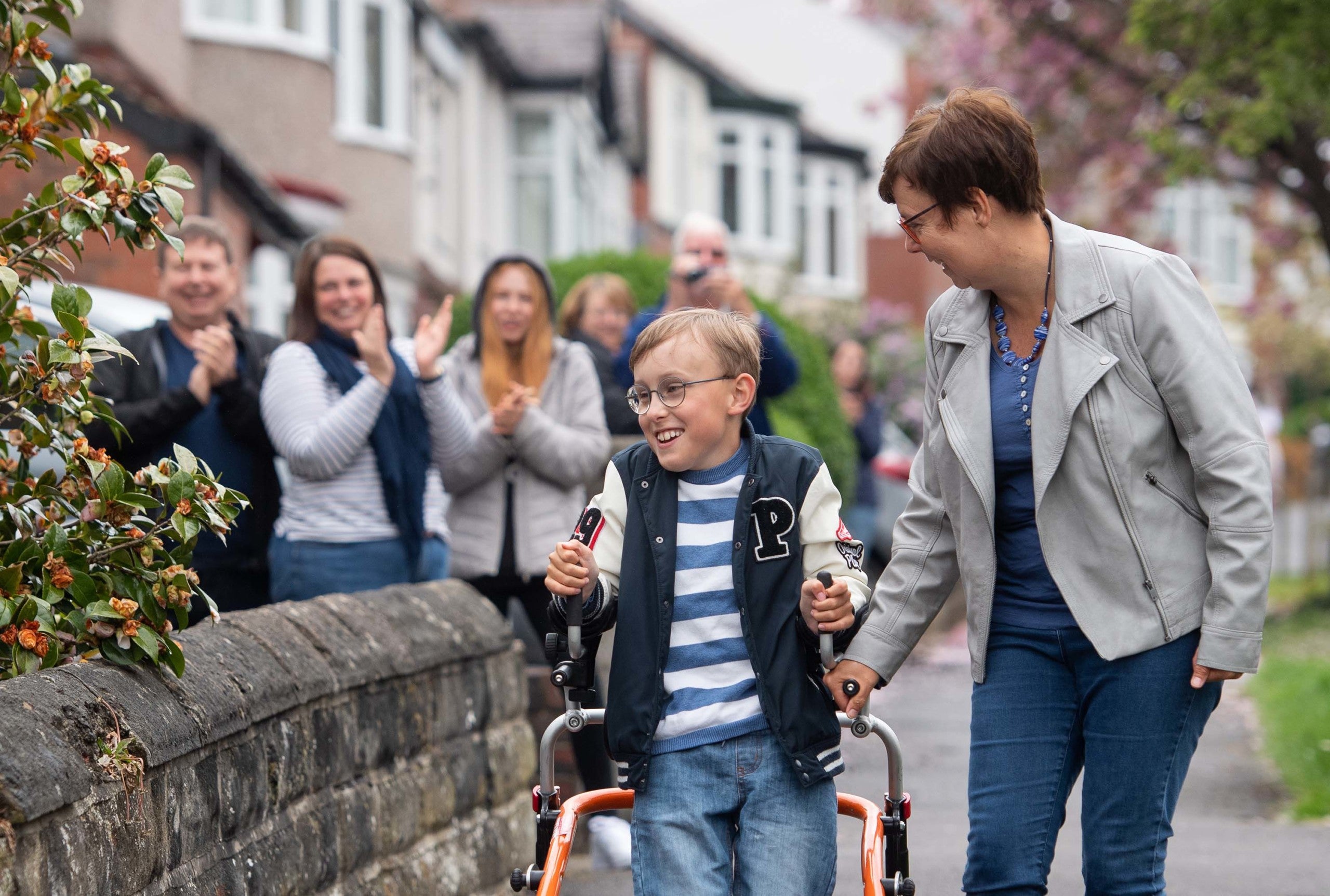 Tobias Garbutt, who has cerebral palsy and autism, is cheered on by neighbours as he walks along the street outside his home in Sheffield, South Yorkshire. Nine-year-old Tobias, who cannot stand or walk unaided, has been inspired by Captain Tom Moore and is aiming to complete a marathon on his daily walks. His initial fundraising target of £500 for Sheffield Children's Hospital and Paces School has been surpassed, and is now approaching £15,000. (Photo by Joe Giddens/PA Images via Getty Images via CNN)
by: Amy Woodyatt, CNN
Posted: Jun 1, 2020 / 07:46 AM EST / Updated: Jun 1, 2020 / 07:47 AM EST

(CNN) — A 9-year-old boy with cerebral palsy and autism has raised $100,000 for charity after completing a marathon up and down his street using a walker.

Tobias Weller completed the final leg of his 26.2-mile marathon in Sheffield, northern England, on Sunday surrounded by socially distanced neighbors and well-wishers.

Cerebral palsy is a group of neurological disorders that affect the ability to move. According to his JustGiving page, Tobias cannot stand or walk unaided, and requires support with most tasks, but, inspired by Captain Tom Moore, a war veteran who raised millions for the UK’s National Health Service by walking laps of his garden ahead of his 100th birthday, Tobias set his sights on a marathon.

Tobias had been planning a sponsored 1 kilometer (0.6 mile) walk around a local park last month, but was unable to go ahead with it because of coronavirus lockdown restrictions.

“Then I heard about Captain Tom and I thought why don’t I use my walker to try to complete a marathon by walking up and down my street every day,” he said in a video ahead of the marathon, admitting it would be a “ginormous challenge.”

At the beginning of lockdown, Tobias could walk a maximum of 50 meters (164 feet) a day, but as he grew closer to completing his challenge — which took him 70 days, according to the PA Media news agency — he was walking up to 750 meters (half a mile) a day.

He said: “Every bit of it has been totally awesome.

“I love it when my neighbors clap and cheer for me. I’m getting stronger and stronger every day. It’s such a good feeling.”

So far, Tobias has raised over £81,600 ($100,700) — £50,000 more than his original target of £30,000 for Sheffield Children’s Hospital and Paces School, a school that supports children and adults with neurological conditions, including Tobias.

“I’m so, so pleased that he’s completed his marathon. He’s done really well. He’s tried so hard all the way through. He’s really achieved a massive goal,” she said, according to PA.