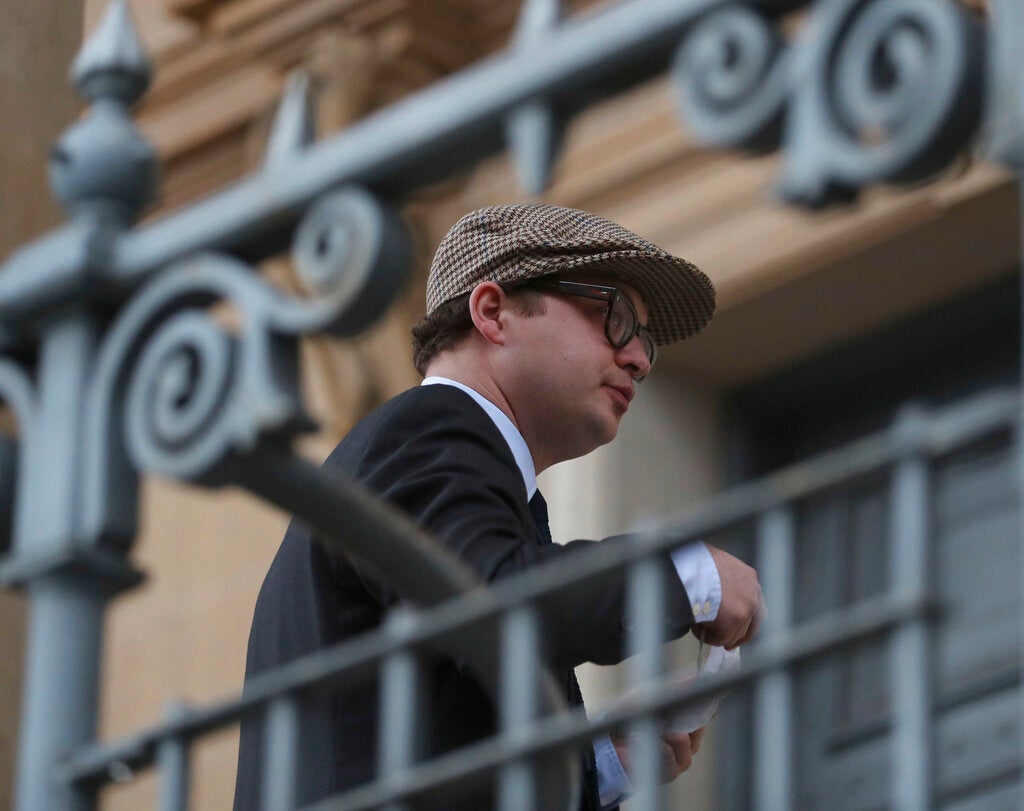 Simon Bowes-Lyon, the Earl of Strathmore, arrives at Dundee Sheriff Court ahead of sentencing, in Dundee, Scotland, Tuesday, Feb. 23, 2021. A relative of Queen Elizabeth II was sentenced Tuesday to 10 months in prison for sexually assaulting a woman at his ancestral castle in Scotland. Simon Bowes-Lyon, the Earl of Strathmore, had admitted assaulting the woman in a bedroom at Glamis Castle in February 2020. (Jane Barlow/PA via AP)
by: Rob Picheta, CNN
Posted: Feb 23, 2021 / 12:42 PM EST / Updated: Feb 23, 2021 / 12:42 PM EST

(CNN) — A relative of Queen Elizabeth II has been jailed for 10 months for sexual assault, after forcing his way into a woman’s bedroom and attacking her at his Scottish castle last year.

Simon Bowes-Lyon, the Earl of Strathmore, had pleaded guilty at a previous hearing to sexually assaulting the woman during an event being held at Glamis Castle in February 2020.

The 34-year-old is the Queen’s first cousin, twice removed, and a member of the Queen Mother’s Bowes-Lyon family.

He was sentenced at Dundee Sheriff Court in Scotland on Tuesday. Glamis Castle, where he lives and where the attack took place, was the Queen Mother’s childhood home.

The court heard that the woman was attending a three-day public relations event at the castle and had gone to bed when a drunk Bowes-Lyon went to her room at ​around 1:20 a.m. He persuaded her to ​open the door, and then pushed her onto the bed, assaulted her ​and refused to leave over the course of 20 minutes.

Sheriff Alastair Carmichael laid out the details of the assault in court, describing how Bowes-Lyon had grabbed the woman by her breast and genitals, pushed her against a wall, attempted to lift her nightdress and ​”repeatedly shut the bedroom door when she tried to open it​,” according to the court sentencing.

“Throughout all of this she made it clear that she wanted you to stop. She told you repeatedly that she had a boyfriend, repeatedly told you to leave and repeatedly had to keep pushing you away from her. All of which you ignored.

“Once she’d finally managed to eject you from her bedroom, you returned to the door and pleaded with her to let you back in,” Carmichael said in his sentencing remarks.

“Even now — one year on — she still, occasionally, has nightmares and feels panicked because of being sexually assaulted by you,” he added.

Bowes-Lyon was also placed on the sex offenders register for 10 years. The judge said his castle would meet the criteria for house arrest, but concluded that such a sentence would not fit the severity of the crime.

In a statement sent to CNN by a spokesperson, Bowes-Lyon said: “I am greatly ashamed of my actions which have caused such distress to a guest in my home. When I realised what I had done I apologised quickly to the woman concerned. I apologise wholeheartedly again today. I am deeply sorry for my behaviour and the anguish it has caused.

“Clearly, I had drunk to excess on the night of the incident. As someone who is only too well aware of the damage that alcohol can cause, I should have known better. I recognise, in any event, that alcohol is no excuse for my behaviour,” he said.