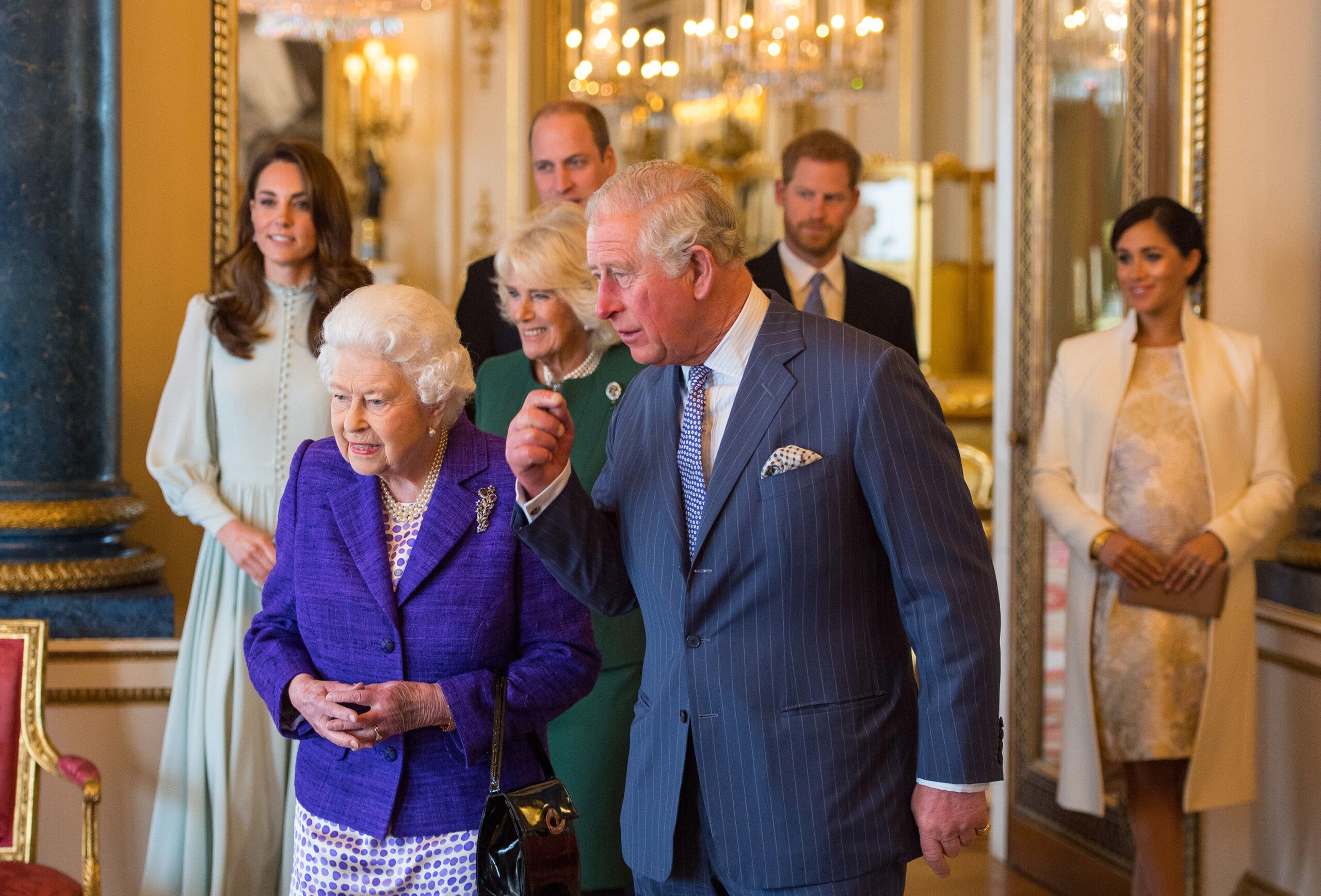 (CNN) — Buckingham Palace is under mounting pressure to respond in the wake of Harry and Meghan’s seismic interview with Oprah Winfrey.

The Duke and Duchess of Sussex leveled a series of damning accusations in their first sit-down since stepping back from their roles as senior members of the British royal family and moving to the US last year.

Some of these claims have the potential to deeply impact the monarchy’s reputation and they left a cloud of suspicion over some of its members.

Yet the interview, first broadcast in the US on Sunday, and its aftermath are still being met with a wall of silence from the palace on Tuesday.

One of the most biggest bombshells came from the Duchess, who revealed an unnamed member of the family had approached Harry to discuss the color of the couple’s unborn baby’s skin. Winfrey said Monday that the Duke later clarified that neither of his grandparents, Queen Elizabeth or Prince Philip, had been part of those conversations.

In the two-hour blockbuster screened in the UK on Monday night, the couple touched upon a string of issues including racism, mental health, royal family dynamics and lack of institutional support.

In a shockingly brave admission, Meghan disclosed to Winfrey that life as a senior working royal had driven her to contemplate suicide, adding she “just didn’t want to be alive anymore.”

The couple cited a lack of support over invasive press coverage and the royal institution’s decision to deny their son Archie a title — and with it his eligibility for protection — as the basis for their decision to relocate from the UK.

Harry meanwhile admitted to an estrangement with his father, Prince Charles, whom Harry said stopped taking his calls shortly after the couple announced they were stepping back from the royal family last January. He added that he felt “really let down, because he’s been through something similar — he knows what pain feels like.” However, the Duke added that despite the hurt, repairing the relationship in time will be “one of my priorities.”

Harry also revealed his connection with his brother, Prince William, had taken a hit, saying the “relationship is space at the moment,” implying the pair weren’t on speaking terms but again hoped time would heal the wounds. He explained to Winfrey that he and William “had been through hell together” but that they were “on different paths.”

The palace faced storms on multiple fronts by sunrise in London on Monday.

The interview had been relentlessly previewed in the media over recent days, drawing comparisons with a royal tell-all given by Harry’s mother, Princess Diana, in 1995, which shed light on the breakdown of her marriage to Charles.

But the revelations in Sunday’s broadcast may have dwarfed even those in magnitude, as Harry and Meghan’s scorched-earth confessional posed problem after problem for palace staffers and senior royals.

Perhaps the most pertinent was Meghan’s allegation that an unnamed family member had asked about Archie’s skin color and “what that would mean or look like.” She said those discussions were relayed to her from Harry.

Harry declined to name the family member but said he was “a bit shocked” by the conversation. Winfrey said on CBS on Monday morning that “it was not his grandmother nor his grandfather that were part of those conversations.” In Britain, the shadow education secretary, Kate Green, said Buckingham Palace should launch an investigation.

Palace officials are also scrambling to respond to claims from both the Duke and Duchess that their pleas for help with their mental wellbeing and security were ignored by the institution.

Fighting back tears at one point, Meghan said her thoughts of suicide were incredibly difficult to bear, and she was reticent to share them with her husband. “But I knew that if I didn’t say it, that I would do it — and I just didn’t want to be alive anymore,” she said.

Harry, whose mother Diana was killed when he was a boy, said he was “terrified” by his wife’s admission. The prince, who is sixth in line to the throne, said there is a culture of suffering in silence in the royal family. But Meghan’s race and the abuse she endured made the situation even more difficult for the couple, and their perceived lack of support ultimately led, above all other factors, to their dramatic decision to quit as working royals.

They described in emotional detail the most difficult moments — Meghan revealing her thoughts to Harry hours before they were due to go to an event; the Prince arriving home from work each day to find his wife crying while breastfeeding their newborn — and said a “lack of support and lack of understanding” were the reasons they chose to step away.

Meghan said the situation was exacerbated by often racist and “outdated, colonial undertones” that repeatedly appeared in coverage of the couple in Britain’s notoriously vitriolic tabloids. Both described a toxic blend of press intrusion, bitterness on social media and isolation from a support structure.

Harry added that he pushed the issue with the royal family. He told Winfrey he believed there were many opportunities for the palace to “show some public support” in the face of continued racial abuse in the press, “yet no one from my family ever said anything. That hurts.”

“I regret believing them when they said I would be protected,” Meghan told Winfrey.

CNN has reached out to the royal family for comment.

Perhaps the only silver lining for the family is that its leader survived the interview relatively unscathed. Harry and Meghan both spoke effusively of the Queen, describing her as caring and kind from the beginning.

“My grandmother and I have a really good relationship, and an understanding and I have a deep respect for her,” Harry said. Meghan said she has spoken to her frequently in the past year, including on the day that Prince Philip was admitted to hospital last month.

Meghan added that despite the ordeal, it was important to differentiate the royal family from “the people running the institution.”

She discussed rumors of a dispute with Catherine, Duchess of Cambridge. Meghan said reports she made Kate cry over the dresses of flower girls at her wedding were untrue, and it was in fact the Duchess of Sussex who cried. But “there was no confrontation,” Meghan said, describing her sister-in-law as a “good person.”

But the evidently strained family dynamic will overshadow the royals’ upcoming engagements. No statements have yet been issued by any of their communications teams in the wake of the interview.

As the hours ticked by and the dust from the broadcast settled on Monday, the British media leapt to cover the fallout, with some newspapers publishing extra early editions overnight in order to feature the interview on their front pages.

As has so often been the case with the couple, coverage ranged from the measured to the hysterical. The Daily Mail ran a headline reading “Kate Made Me Cry” on its 2 a.m. edition, before leading on Meghan’s accusation of racism later in the morning. The tabloid’s website also included a prominent banner that read: “I WANTED TO KILL MYSELF.”

The Sun featured a new nickname for Meghan amid her rift with the royal family: “Megxile,” and the Daily Express dismissed the broadcast as “a self-serving TV chat with Oprah.”

On Monday afternoon, several journalists used Boris Johnson’s press conference on Covid-19 to ask for his thoughts on the Oprah interview. The Prime Minister declined to weigh in, aside from saying he’d always had “the highest admiration for the Queen and the unifying role that she plays in our country.”

The media’s treatment of the royal couple formed a significant part of the interview, with the pair both taking aim at sections of the press.

Harry said the palace is in “fear” of its media coverage, meaning they had little freedom while part of the family.

“To simplify it, it’s a case of if you as a family member are willing to wine, dine and give full access to these reporters, then you will get better press,” Harry said. “There is a level of control by fear that has existed for generations.”

The interview was broadcast in Britain at 9 p.m. Monday, with terrestrial broadcaster ITV winning the race to acquire rights. But its main talking points were already being dissected in detail by Brits and in the media long before its UK airing.

Charles Anson, a former press secretary to the Queen, said on Monday the couple raised “issues that need to be looked at carefully,” but claimed to the BBC that there “wasn’t a strand of racism” within the royal household.

But Julie Montagu, Viscountess Hinchingbrooke, told the BBC that their revelations were “astounding,” and that as an American woman who married into British aristocracy, she could relate to Meghan’s descriptions. “You don’t really know until you’re in it, and I think that she made that very well known last night in her interview,” she said.