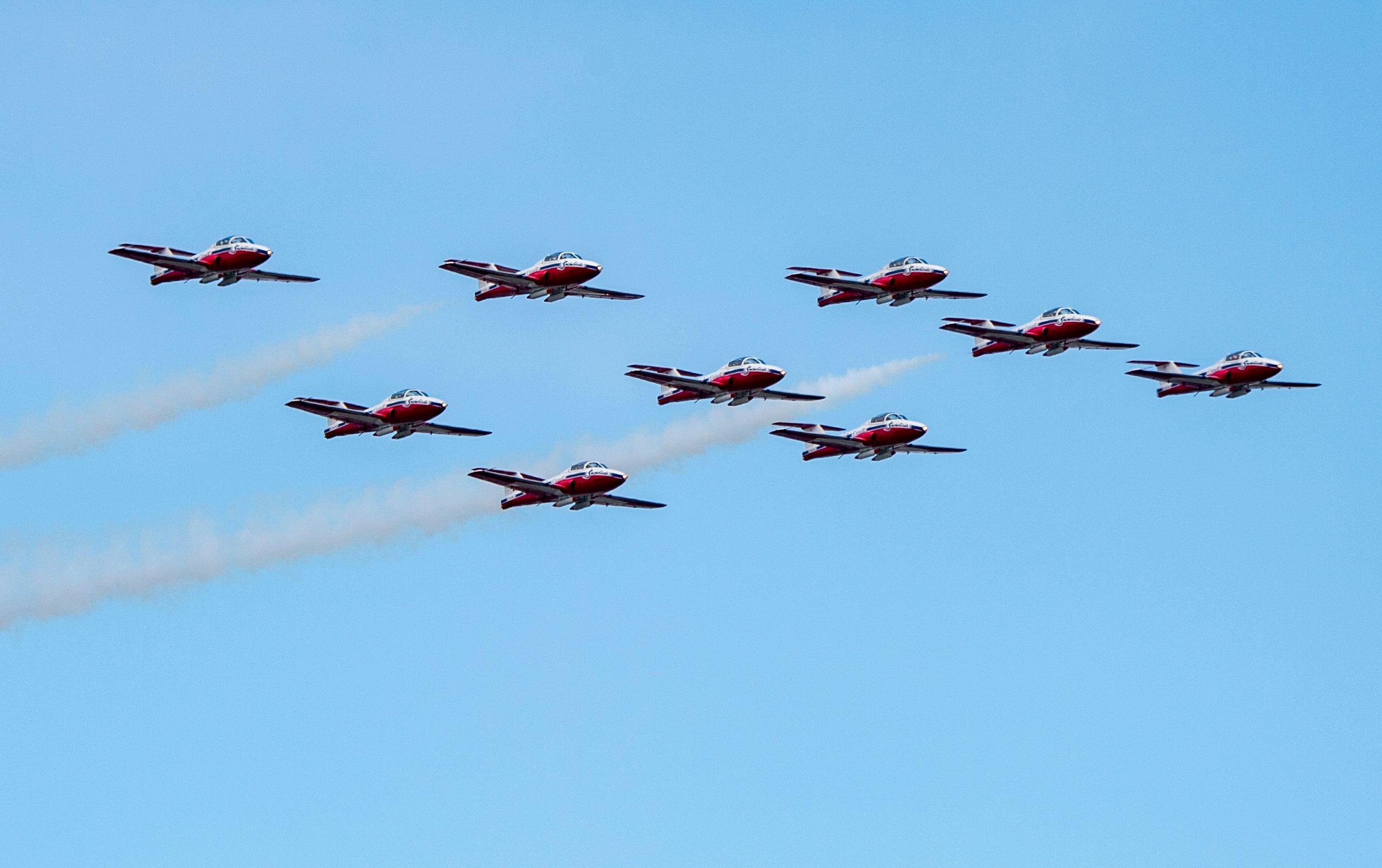 The Snowbirds, the Royal Canadian Air Force air acrobatics team, fly over Montreal in a morale-building tour of Canada called "Operation Inspiration » as Canadians enter their third month of social distancing and isolation during the COVID-19 coronavirus pandemic in Montreal, Quebec, Canada, on May 7, 2020. (Photo by Sebastien St-Jean / AFP) (Photo by SEBASTIEN ST-JEAN/AFP via Getty Images)
by: Associated Press
Posted: May 17, 2020 / 06:47 PM EST / Updated: May 17, 2020 / 08:06 PM EST

KAMLOOPS, British Columbia (AP) — A Canadian acrobatic jet crashed into a British Columbia neighborhood Sunday during a flyover intended to boost morale during the pandemic, killing one crew member, seriously injuring another and setting a house on fire. Video appeared to show at least one person ejecting.

“It is with heavy hearts that we announce that one member of the CF Snowbirds team has died and one has sustained serious injuries,” The Royal Canadian Air Force said in a tweet.

Canada’s defense department said emergency crews were responding to the crash at the airport in the city of Kamloops in British Columbia. The Snowbirds are Canada’s equivalent of the U.S. Air Force Thunderbirds or U.S. Navy’s Blue Angels.

Rose Miller lives directly across the street from where the plane hit. She’d watched the Snowbirds arrive on Saturday, and she went to her front window when she heard the roar of jet engines.

Miller said she heard a loud bang and wondered whether it might be a sonic boom. Then she watched the plane smash onto the ground.

“It looked to me like it was mostly on the road, but it just exploded. It went everywhere,” she said. “In fact, I got a big, huge piece in my backyard. The cops said it was the ejection seat.”

Miller said a couple in their early 70s lives in the home. Both are OK, she said, noting that she’d spoken with them after they were evacuated to a nearby street. The woman had been in the basement while the man was behind the house.

Miller said section of roof on a home on a nearby street has been covered up.

Video posted to Twitter by 6:10 a.m. in Kamloops appears to show two Snowbirds taking off from what is believed to have been Kamloops Airport. One of the aircraft subsequently climbed into the sky before rolling over and plunging to the ground. The video appears to show at least one person ejecting from the plane before it disappears behind a stand of trees and an explosion is heard.

“Our number one priority at this time is determining the status of our personnel, the community and supporting emergency personnel. When appropriate, more information will be made available,” the Department of National Defense said in a statement.

The Royal Canadian Mounted Police said the cause of the crash is under investigation.

Kenny Hinds, who lives in a house seven doors down from the crash site, said it looked like the living room of the house where the crash occurred was on fire.

“I just started running down the street. And I got there maybe a minute after it crashed and there was a couple of residents that had their hoses out and they were trying to put the flames out because it hit a house,” he said. “It looked like most of it landed in the front yard, but maybe a wing or something went through the roof perhaps.”

Hinds had been watching the aircraft after hearing them take off, and said he was able to see the crash and saw “the Snowbird going straight down.”

“I saw what looked like a parachute about, say, 20 feet over the house, and it disappeared from sight, and the parachute hadn’t fully deployed yet — it was still sort of straight up and down,” he said.

Operation Inspiration started in Nova Scotia earlier this month and features the team’s signature nine-jet formation. It was aimed at boosting morale amid the pandemic.

Marni Capostinsky said she lives across the street from the crash site and was out on the deck when she heard the plane getting closer.

“We ran out under the cover to look and saw something black coming towards us, everyone hit the deck it was so loud,” she said.

Sunday’s crash follows the downing of another Snowbird in the U.S. state of Georgia last October, where the team was scheduled to perform in an air show. Capt. Kevin Domon-Grenier sustained minor injuries when he ejected from the plane, which crashed into a farmer’s field. No one else was hurt.

The Snowbirds have performed at airshows across Canada and the U.S. for decades and are considered a key tool for raising awareness about — and recruiting for — the air force. Eleven aircraft are used during shows, with nine flying and two kept as spares.

The air force obtained its Tutor jets in 1963 and has used them in air demonstrations since 1971. Prior to Sunday’s crash, seven pilots and one passenger had been killed and several aircraft had been lost over the course of the Snowbirds’ history.