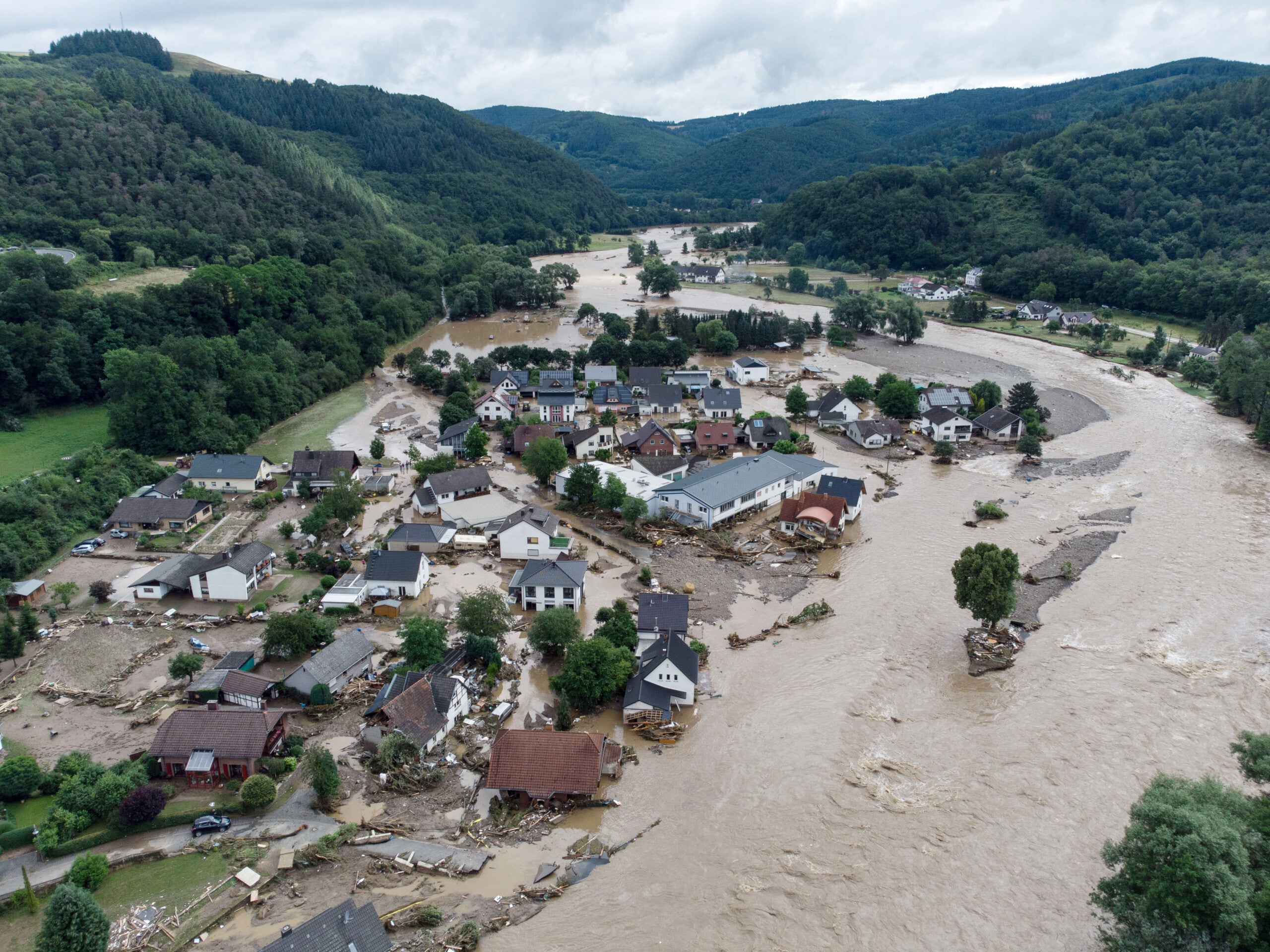 (CNN) — At least 55 people have died due to severe flooding in Western Europe, caused by what experts described as the heaviest rainfall in a century.

In Germany, about 1,300 people are “assumed” missing in the district of Ahrweiler, which is in Rhineland-Palatinate state, the local government said.

Flash floods swept across western and southern parts of the country, causing buildings to collapse, police said Thursday. Germany is worst hit with 49 people killed, while six people died in Belgium. Luxembourg and the Netherlands are also affected.

“In some areas we have not seen this much rainfall in 100 years,” Andreas Friedrich, a German weather service spokesman, told CNN. He added that “in some areas we’ve seen more than double the amount of rainfall which has caused flooding and unfortunately some building structures to collapse.”

Extreme rainfall totals were observed Wednesday into Thursday morning across much of western Germany and the Benelux region, with North Rhine-Westphalia and Rhineland-Palatinate seeing the highest rainfall totals, according to CNN Meteorologist Brandon Miller.

Widespread swaths of these states saw 24-hour rainfall totals between 100-150 mm (3.9-5.9 inches), which represent more than a month’s worth of rainfall in this region.

Cologne recorded 154 mm (6 inches) of rainfall in only 24 hours ending Thursday morning, which is nearly double its monthly average for July of 87 mm (3.45 inches).

Locally heavier downpours resulted in extreme flash flooding. In Reifferscheid, an incredible 207 mm (8.1 inches) of rain fell in only nine hours, according to the European Severe Weather Database.

At least 30 dead in one German state

In North Rhine-Westphalia, Germany’s most populous state, 30 people have been found dead, a spokesman for the state government told CNN. According to the spokesman, at least 50 people were also injured in the floods and the number of people missing is unclear.

In Rhineland-Palatinate, at least 19 people were found dead but “that number is expected to rise,” a spokesman for police in Koblenz told CNN.

On Thursday morning in the district of Bad Neuenahr-Ahrweiler, more than 1,000 police and emergency workers were called in, the local government said.

German Chancellor Angela Merkel, who is on her swansong visit to Washington, DC, said the deadly floods that have hit some parts of her country are a “catastrophe.”

“Here in Washington, my thoughts are also always with the people in our homeland,” Merkel said at a news conference on Thursday ahead of her meeting with President Joe Biden.

“Peaceful places are going through a catastrophe in these hours, one can say a tragedy. Heavy rainfall and floods are very inadequate words to describe this — it is therefore really a catastrophe.”

Merkel said the focus is currently on the rescue and immediate response to those affected by the floods, but added that she was in close contact with her country’s finance minister, Olaf Scholz, to work on a strategy for longer-term financial aid to help with recovery.

“I mourn for those who have lost their lives in this catastrophe — we do not yet know these numbers but there will be many,” she added.

Merkel’s visit is likely her last to the United States before stepping down as Chancellor in the fall after 16 years in power.

Armin Laschet, the premier of North Rhine-Westphalia and the Conservatives’ candidate to succeed Merkel, visited affected parts of the region on Thursday.

“We will be faced with such events over and over, and that means we need to speed up climate protection measures, on European, federal and global levels, because climate change isn’t confined to one state,” Laschet said.

In neighboring Belgium, at least six people died in floods in the southern region of Wallonia, CNN affiliate RTBF reported Thursday, citing the magistrate on duty at the Verviers prosecutor’s office and the governor of the Liège province.

The Wallonia region borders North Rhine-Westphalia. The floods have also disrupted Belgium’s national railway network, Infrabel, stopping services in the French-speaking south of the country, the company said Thursday in a press release.

Italy has begun sending search crews and vehicles to Wallonia, the Italian Civil Protection agency said in a statement.

King Philippe of Belgium visited the town of Chaudfontaine, in the province of Liège, after it was hit by severe flooding.

“We are really touched by the severity of the catastrophe,” Philippe said in an on-camera statement. “Our thoughts go to the victims, their families, and all the people who had to be evacuated in emergency from disaster areas.”

Workers from France’s Civil Protection Agency arrived in the Belgium province of Liege to assist with recovery and rescue efforts.

“Rescuers from the instruction and intervention unit of the (French) Civil Protection carry out the first reconnaissance operations,” the French Civil Protection agency said in a post on Twitter, shortly after their arrival. “They will be joined this evening by firefighters, divers and lifeguards.”

The European Union also activated the civil emergency response mechanism to help areas of Belgium affected by floods, the EU Commission said Thursday in a statement.

“Belgium, Luxembourg, Netherlands, Germany you can count on the EU’s help to face these dramatic floods. My thoughts are with the victims of these tragic events and with all who will have to rebuild what they have lost. I want to thank all rescue teams for their invaluable help and relentless efforts,” EU Council president Charles Michel tweeted Thursday.

“Shocking to see the devastating flooding across Germany, Luxembourg, the Netherlands and Belgium,” Johnson tweeted.

“My thoughts are with the families of the victims and all those affected. The UK is ready to provide any support needed in the rescue and recovery effort.”

Shipping was also suspended on the River Rhine, one of Germany’s longest and most important arteries of industrial transport, according to NTV news.

Weather service spokesman Friedrich said the downpours were caused by cooler and warmer rainfall mixing. “It came from France at the beginning of the week to Germany and has been sitting over Germany for the last 48 hours,” he said.

“For now we predict the worst of the torrential rainfall is over, though more heavy rain is due in southwestern Germany on the upper reaches of the Rhine, (Thursday) and Friday,” he added.

The city of Maastricht in the Netherlands has called on residents of the Heugem and Randwyck districts to leave their homes “as soon as possible” due to rising water in the river Meuse.

“The water in the Meuse is rising rapidly. We expect it to cross the quays at Randwyck/Heugem around 3 a.m.,” a news release from the city council of Maastricht said. “This means water will end up in the streets and homes.”

According to the Dutch statistics office, the population of the two neighborhoods is more than 9,000.

The extreme rainfall was the result of a slow-moving area of low pressure, which allowed a conveyor belt of warm and moist air to fuel powerful thunderstorms and bring heavy, long-lasting rainfall, according to the German national weather service, DWD.

Intense rainfall rates are becoming more common in the warming climate, as warmer air can hold more water vapor that is available to fall as rain.

“These kind of high-energy, sudden summer torrents of rain are exactly what we expect in our rapidly heating climate,” according to Hannah Cloke, a professor of hydrology at the University of Reading.

“The fact that other parts of the northern hemisphere are currently suffering record-breaking heatwaves and fires should serve as a reminder of just how much more dangerous our weather could become in an ever-warmer world,” Cloke said.