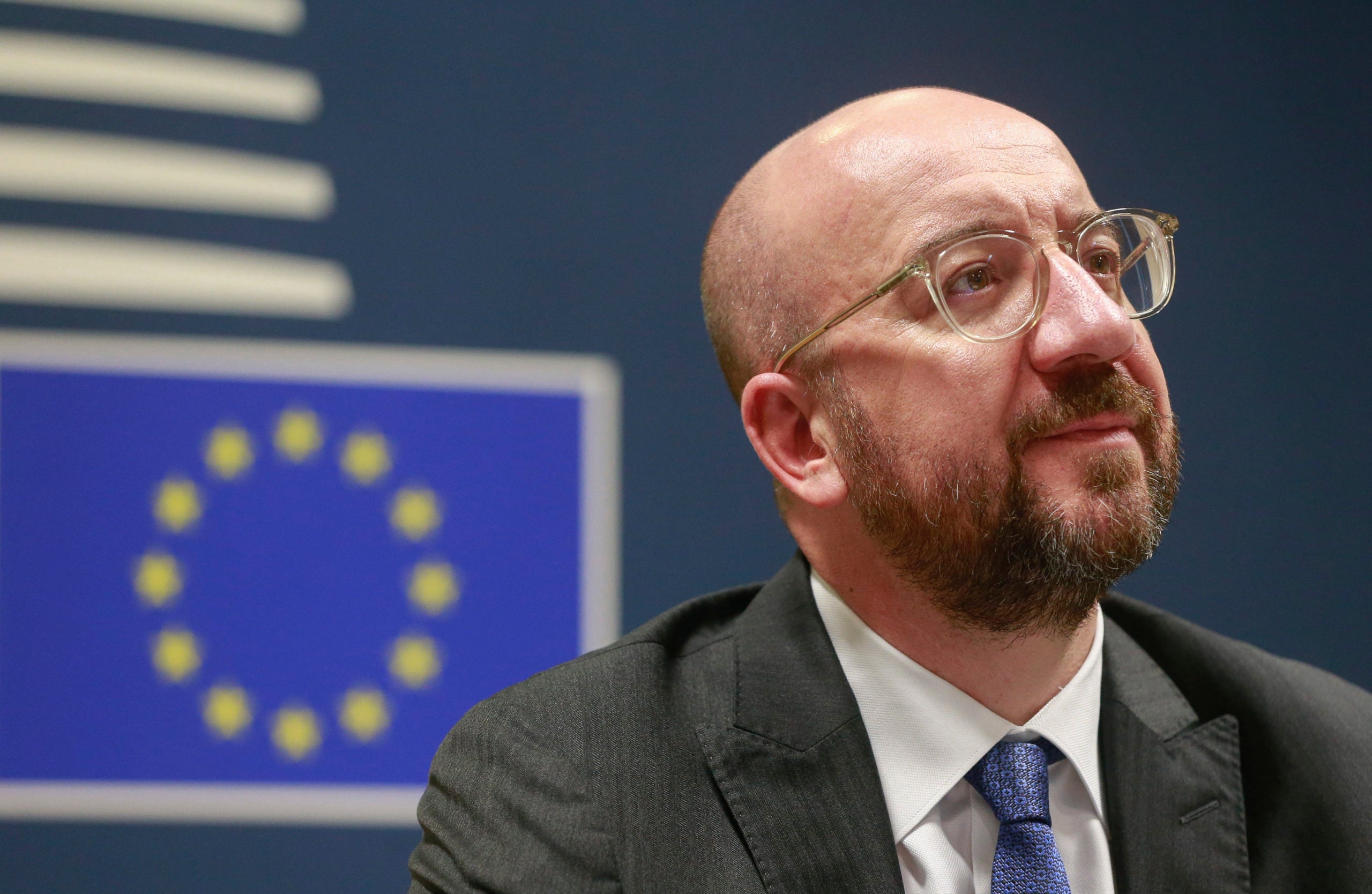 European Council President Charles Michel participates in a videoconference call with EU leaders at the European Council building in Brussels, Tuesday, March 10, 2020. EU leaders held a videoconference Tuesday to coordinate efforts across the 27-nation bloc in the hopes of slowing down the spread of the coronavirus. For most people, the new coronavirus causes only mild or moderate symptoms, such as fever and cough. For some, especially older adults and people with existing health problems, it can cause more severe illness, including pneumonia. (Stephanie Lecocq, Pool Photo via AP)
by: LORNE COOK and SAMUEL PETREQUIN
Posted: Mar 12, 2020 / 06:18 AM EST / Updated: Mar 12, 2020 / 06:19 AM EST

BRUSSELS (AP) — The European Union on Thursday will evaluate President Donald Trump’s decision to restrict travel from Europe to the United States amid deep concern over the economic impact of the move with markets already heavily hit by coronavirus.

“We will assess the situation today. Economic disruption must be avoided,” European Council President Charles Michel, who chairs summits of EU presidents and prime ministers, said in a tweet.

Michel underlined that “Europe is taking all necessary measures to contain the spread of the COVID-19 virus.”

Trump said all European travel would be cut off, but Homeland Security officials later clarified that the new restrictions would apply only to most foreign nationals who have been in Europe’s passport free travel zone at any point for 14 days prior to their arrival to the United States. The so-called Schengen area comprises 26 countries including EU members France, Italy, German, Greece, Austria and Belgium, where the bloc has its headquarters, but also others like Switzerland, Norway and Iceland.

The restrictions announced by Trump don’t apply to the United Kingdom, where the number of confirmed cases has reached 460, or Ireland, which isn’t part of Schengen. According to the European Centre for Disease Prevention and Control’s latest figures, more than 17,000 cases of COVID-19 have been confirmed across Europe, and more than 700 people have died on the continent.

For most people, the new coronavirus causes only mild or moderate symptoms, such as fever and cough. For some, especially older adults and people with existing health problems, it can cause more severe illness, including pneumonia. The vast majority of people recover from the new virus. According to the World Health Organization, people with mild illness recover in about two weeks, while those with more severe illness may take three to six weeks to recover.

With the virus now present in all 27 EU countries, the bloc’s top officials have pledged to stand united in fighting the disease and are likely to adopt a common approach in their response to Trump’s announcement.

This week, European Commission president Ursula von der Leyen announced the launch of a “corona response investment fund” seeded with 7.5 billion euros that she said would reap billions more. It’s aimed at propping up health care structures, small businesses suffering from the impact of the virus and labor markets where jobs might be hit.

Von der Leyen postponed a trip to Greece in order to focus on combating the rapid spread of the virus. Von der Leyen had planned to travel to Athens on Thursday for discussions related to the latest influx of migrants at the Greek-Turkish border.

“I will be focusing on launching the EU coordination efforts,” von der Leyen said.

As the virus spreads, more European countries are adopting drastic measures. After Italy entered a lockdown, Denmark said that all schools and day-care facilities in the country will be closed from Monday. All public servants who don’t perform critical functions, have been ordered to stay home for the next two weeks.

Meanwhile, the U.S. Army decided to cut down the number of troops taking part in massive war games that have been planned across Europe over the next six months because of the virus pandemic.

The Defender-Europe 2020 exercises were set to involve around 20,000 American personnel, the biggest deployment of U.S. troops to Europe in the last 25 years.

But U.S. Army Europe said in a statement that “in light of the current coronavirus outbreak, we will modify the exercise by reducing the number of U.S. participants.” No details on numbers were provided.

“Activities associated with the exercise will be adjusted accordingly and we’ll work closely with Allies and partners to meet our highest priority training objectives,” it said.

In all, around 37,000 soldiers from 18 countries, not all of whom are members of the NATO military alliance, had been expected to take part. Some troops and equipment have already deployed.

“The health protection of our force, and that of our Allies and partners, is a top concern,” the statement said.