EU calls for probe after plane diverted to arrest journalist 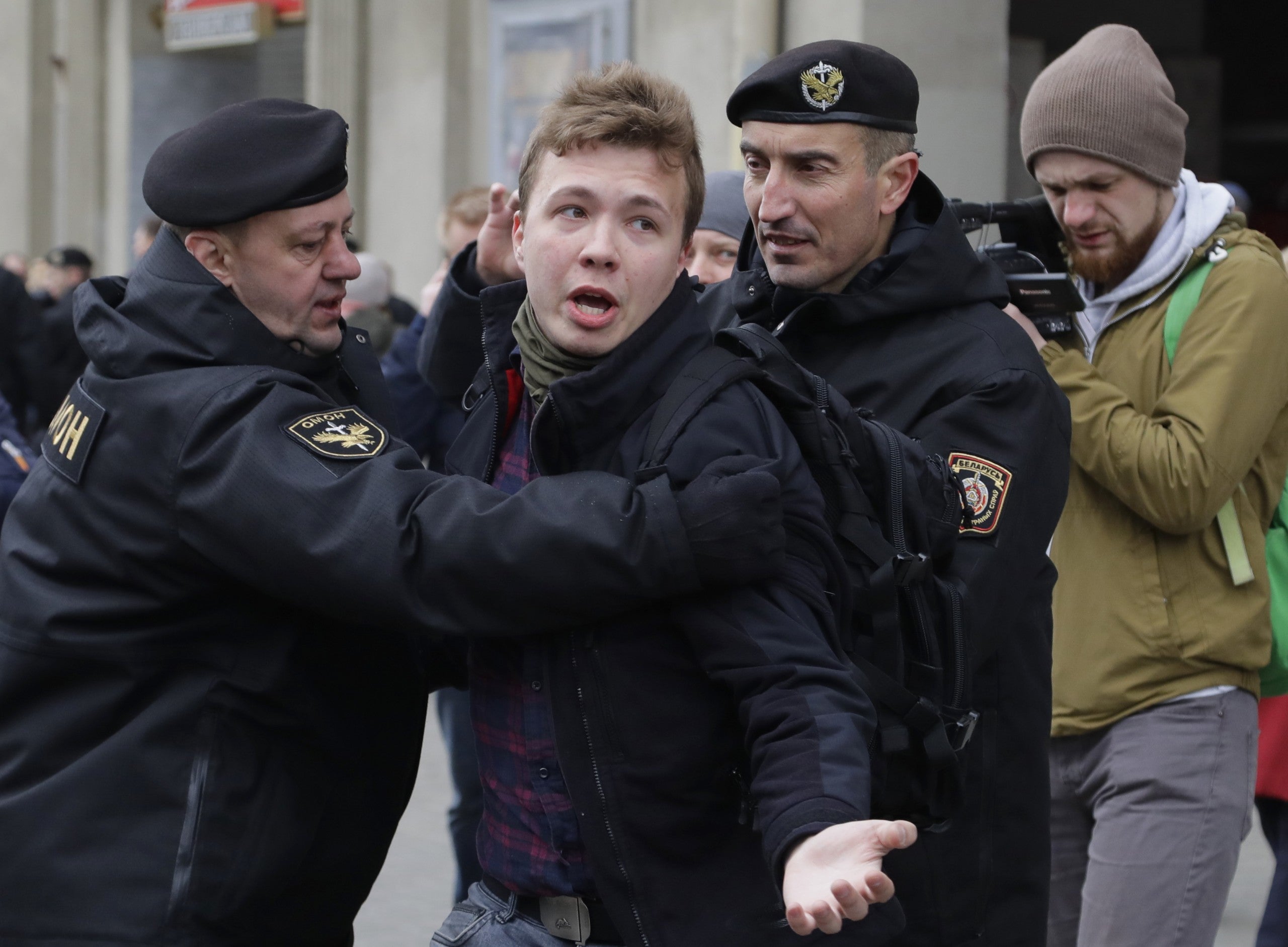 FILE - In this Sunday, March 26, 2017 file photo, Belarus police detain journalist Raman Pratasevich, center, in Minsk, Belarus. Raman Pratasevich, a founder of a messaging app channel that has been a key information conduit for opponents of Belarus’ authoritarian president, has been arrested after an airliner in which he was riding was diverted to Belarus because of a bomb threat. The presidential press service said President Alexander Lukashenko personally ordered that a MiG-29 fighter jet accompany the Ryanair plane — traveling from Athens, Greece, to Vilnius, Lithuania — to the Minsk airport. ﻿﻿(AP Photo/Sergei Grits, File)
by: RAF CASERT and LIUDAS DAPKUS Associated Press
Posted: May 24, 2021 / 05:32 AM EST / Updated: May 24, 2021 / 05:32 AM EST

BRUSSELS (AP) — Western leaders decried the diversion of a plane to Belarus in order to arrest an opposition journalist as an act of piracy and terrorism. The European Union and others on Monday demanded an investigation into the dramatic forced landing of the Ryanair jet, which was traveling between of the bloc’s two member nations.

The airline said Belarusian flight controllers told the crew there was a bomb threat against the plane as it was crossing through the country’s airspace and ordered it to land in the capital of Minsk. A Belarusian MiG-29 fighter jet was scrambled to escort the plane.

Raman Pratasevich, who ran a popular messaging app that played a key role in helping organize massive protests against Belarus’ authoritarian president, was on board and he and his Russian girlfriend were led off the plane shortly after landing. The plane, which began its journey in Athens, Greece, was eventually allowed to continue on to Vilnius, Lithuania.

A group of the chairs of the foreign affairs committees of several Western countries’ legislative bodies called it an act of piracy.

“This reckless act put the passengers and crew in grave danger. It is a reminder of the illegitimacy of the regime claiming authority in Minsk,” signed by representatives from several EU countries, the United Kingdom and the United States, who called for an inquiry by the International Civil Aviation Organization.

The U.S. and the EU already have imposed sanctions on top Belarusian officials amid months of protests, which were triggered by President Alexander Lukashenko’s reelection to a sixth presidential term in an August vote that the opposition rejected as rigged. More than 34,000 people have been arrested in Belarus since August, and thousands were brutally beaten.

The 27 EU leaders open a two-day summit later Monday, and the issue immediately shot to the top the agenda.

EU foreign policy chief Josep Borrell called it “yet another blatant attempt by the Belarusian authorities to silence all opposition voices.” He called the diversion of the plane an “inadmissible step.”

The Belarusian Foreign Ministry on Monday bristled at what it described as “belligerent” EU statements, insisting that the country’s authorities acted “in full conformity with international rules.”

Flight tracker sites indicated the plane was about 10 kilometers (six miles) from the Lithuanian border when it was diverted. There have been conflicting reports of what exactly happened.

The press service of Lukashenko said the president himself ordered that a fighter jet accompany the plane after he was informed of the bomb threat. Deputy air force commander Andrei Gurtsevich said the plane’s crew made the decision to land in Minsk.

But Ryanair said in a statement that Belarusian air traffic control instructed the plane to divert to the capital.

“I saw this Belarusian guy with girlfriend sitting right behind us. He freaked out when the pilot said the plane is diverted to Minsk. He said there’s death penalty awaiting him there,” passenger Marius Rutkauskas said after the plane finally arrived in Vilnius. “We sat for an hour after the landing. Then they started releasing passengers and took those two. We did not see them again.”

Pratasevich was a co-founder of the Telegram messaging app’s Nexta channel, which played a prominent role in helping organize major protests against Lukashenko. The Belarusian authorities have designated it as extremist and leveled charges of inciting riots against Pratasevich, who could face 15 years in prison if convicted.