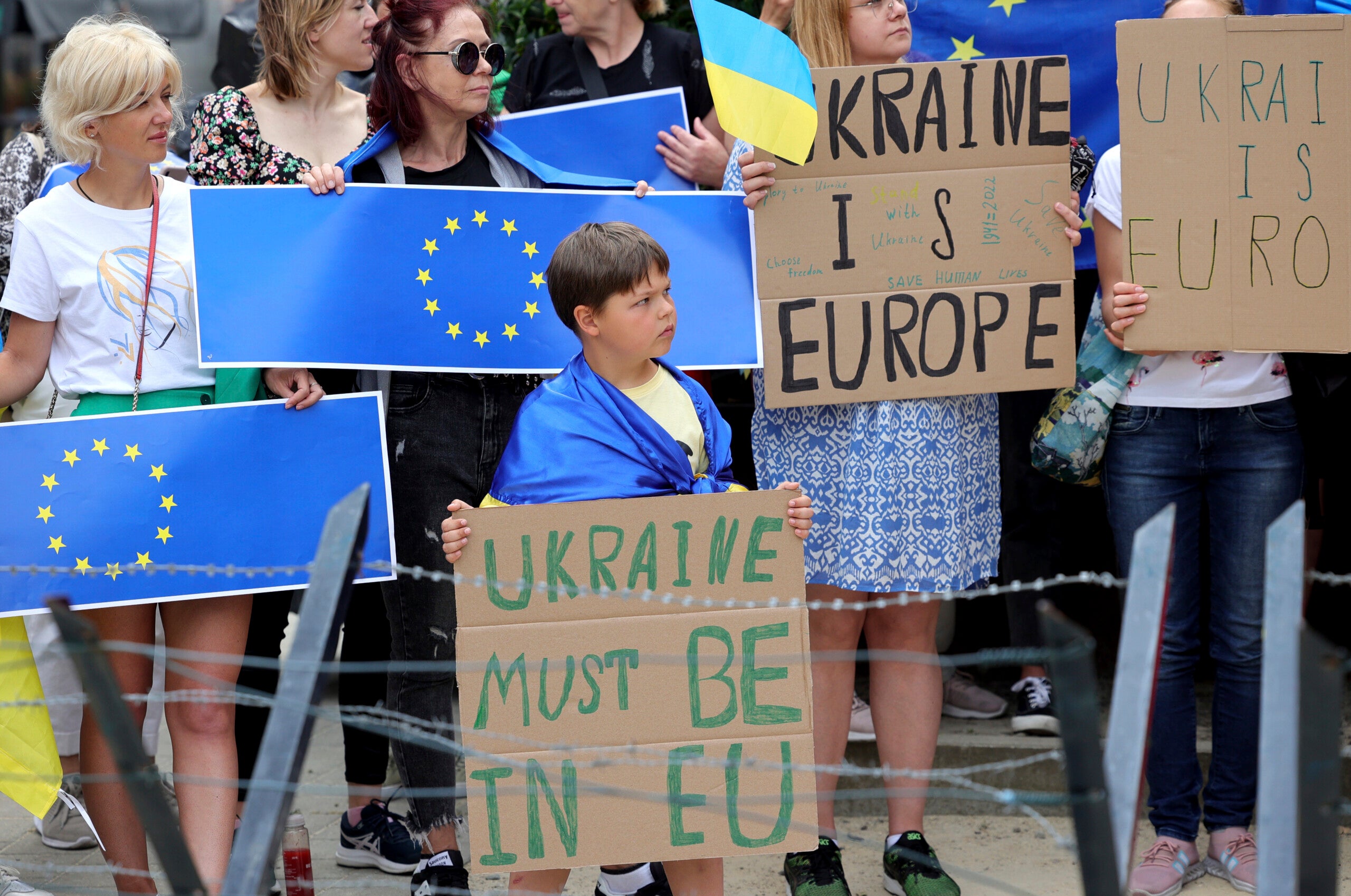 Protestors in support of Ukraine stand with signs and EU flags during a demonstration outside of an EU summit in Brussels, Thursday, June 23, 2022. European Union leaders are expected to approve Thursday a proposal to grant Ukraine a EU candidate status, a first step on the long toward membership. (AP Photo/Olivier Matthys)
by: SAMUEL PETREQUIN and MIKE CORDER, Associated Press
Posted: Jun 23, 2022 / 11:56 AM EST / Updated: Jun 23, 2022 / 11:56 AM EST

BRUSSELS (AP) — European Union leaders on Thursday were set to make Ukraine a candidate for membership in the 27-nation bloc, the first step in a potentially yearslong process that could pull the embattled country further away from Russia’s influence and bind it more closely to the West.

Several diplomats, speaking on condition of anonymity ahead of an EU summit in Brussels, predicted Ukraine would receive the unanimous approval required for candidate status. Ukraine submitted its application just a few days after Russia invaded on Feb. 24.

“It will strengthen Ukraine, it will strengthen Europe. It is a decision for freedom and democracy and puts us on the right side of history,” European Parliament President Roberta Metsola said ahead of the announcement.

A decision in Ukraine’s favor Thursday would be uncharacteristically rapid for the EU. But the biggest war in Europe since World War II and Ukraine’s request for fast-track consideration upended the bloc’s go-slow approach to expansion.

The European Parliament endorsed Ukraine’s bid hours before the summit started, passing a resolution that called on EU governments to “move without delay” and “live up to their historical responsibility.”

The EU’s nations have been united in backing Ukraine in its fight against Russia’s invasion with money and weapons, adopting unprecedented economic sanctions against the Kremlin.

EU candidate status doesn’t give an automatic right to join the bloc and doesn’t provide any immediate security guarantees.

Once a country gains membership, however, it is covered under an EU treaty clause that says if a member falls victim to armed aggression, the other EU countries are obligated to assist it by all the means in their power.

The main benefits from EU membership, though, are economic, since it gives access to a market of 450 million consumers with free movement of labor, goods, services and capital.

Ukraine has long aspired to join NATO, too, but the military alliance is not about to offer an invitation, in part because of governmental corruption, shortcomings in the country’s defense establishment, and its contested borders.

Before the war started, Russia President Vladimir Putin demanded that Ukraine never be allowed to join NATO, which he has condemned for its eastward spread toward Russia’s flank. But earlier this month, he did not seem bothered by Ukraine’s determination to get closer to the EU, saying that it is not a military pact and thus “we have no objections.”

To win membership, Ukraine must meet a host of detailed political and economic conditions, including the embrace of certain democratic principles. The process could take years, maybe decades.

Turkey, for example, applied for membership in 1987, received candidate status in 1999, and had to wait until 2005 to start talks for actual entry. Only one of more than 30 negotiating “chapters” has been completed in the years since, and the whole process is at a standstill as a result of various disputes between the EU and Turkey.

Similarly, several Balkan countries have been seeking without success for many years to join the EU.

European officials have said that Ukraine has already adopted about 70% of the EU rules and standards, but they also have pointed to corruption and the need for deep political and economic reforms in the country.

“Considerable efforts will be needed, especially in the fight against corruption and the establishment of an effective rule of law,” Belgian Prime Minister Alexander De Croo said. “But I am convinced that it is precisely the (postwar) reconstruction of Ukraine that will provide opportunities to take important steps forward.”