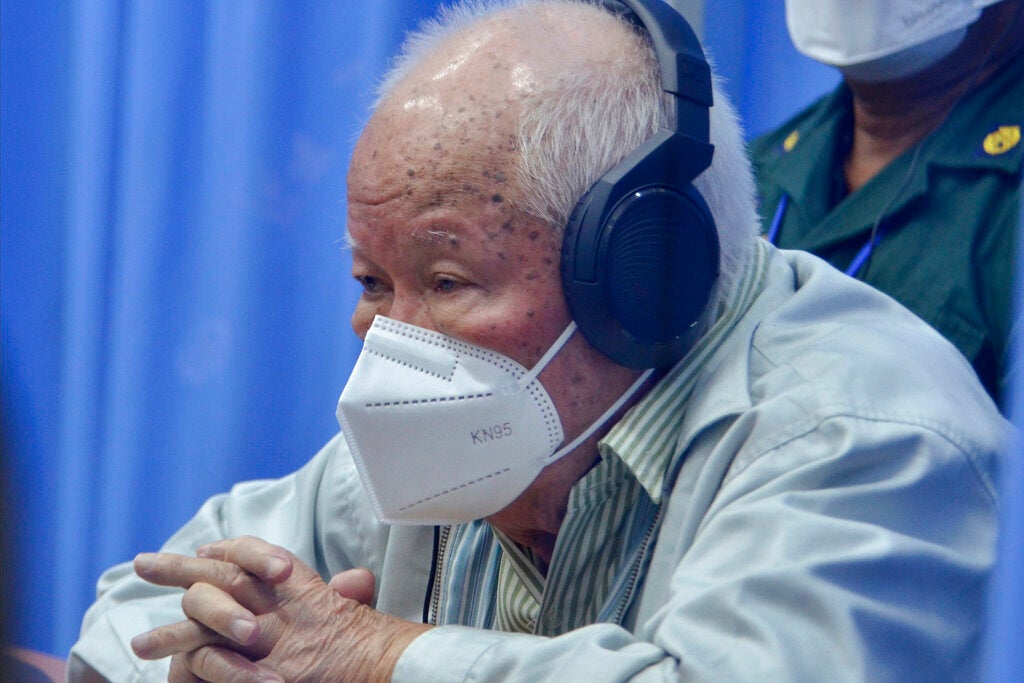 In this photo released by the Extraordinary Chambers in the Courts of Cambodia, Khieu Samphan, former Khmer Rouge head of state, sits in a courtroom during a hearing at the U.N.-backed war crimes tribunal in Phnom Penh, Cambodia, Monday, Aug. 16, 2021. Khieu Samphan, the last living leader from the inner circle of Cambodia's brutal Khmer Rouge regime, is to appear in court Monday as he seeks to overturn his conviction on genocide charges before a long-running international tribunal. (Nhet Sok Heng/Extraordinary Chambers in the Courts of Cambodia via AP)
by: SOPHENG CHEANG and DAVID RISING Associated Press
Posted: Aug 16, 2021 / 04:50 AM EST / Updated: Aug 16, 2021 / 04:51 AM EST

Khieu Samphan, 90, was the former head of state for the Khmer Rouge, the radical communist regime that ruled Cambodia with an iron fist from 1975-1979 and was responsible for the deaths of an estimated 1.7 million people.

His defense team is seeking to overturn a 2018 verdict finding him guilty of genocide, crimes against humanity and war crimes, questioning the evidence and arguing there were procedural mistakes.

Kong Sam Onn told the judges of the Supreme Court Chamber of the Extraordinary Chambers in the Courts of Cambodia, or ECCC, that his client had been given inadequate time to prepare an initial defense, and that the original panel failed to provide the grounds for its ruling in a timely fashion, among other things.

“It should be null and void, and so I am requesting the Supreme Court chamber to … reverse the judgment,” he said.

Khieu Samphan sat in a chair behind his attorneys, wearing a mask in compliance with COVID-19 precautions and appearing to listen intently as they addressed the court. Kong Sam Onn said his client would address the chamber at the end of the four days of scheduled hearings.

Prosecutors in opening statements rejected the procedural arguments, while emphasizing the “totality” of the evidence against the defendant.

“Mr. Khieu Samphan fails to establish the assertion that underlies his entire appeal, that he knew nothing, saw nothing and heard nothing of the crimes for which he stands convicted,” said prosecutor Chea Leang.

“In addition the defendant, Mr. Khieu Samphan, fails to establish that his conduct does not make him responsible for those crimes and contrary to the appellant’s assertions the evidence underlying his convictions is extensive diverse and compelling.”

Observers say it’s unlikely that the conviction will be overturned, and even if it is, the former leader is already serving a life sentence after being convicted in 2014 of crimes against humanity connected with forced transfers and disappearances of masses of people. That conviction was upheld on appeal in 2016.

“The appeal hearing is quiet important for both sides, the Cambodian victims and the accused,” said tribunal spokesman, Neth Pheaktra.

The verdict won’t come until next year.

Under the leadership of the late Pol Pot, the Khmer Rouge sought to eliminate all traces of what they saw as corrupt bourgeois life, destroying most religious, financial and social institutions, and forcing millions out of cities to live in the countryside.

Dissent was usually met with death in the Khmer Rouge’s notorious “killing fields” or elsewhere, while starvation, overwork and medical neglect took many more lives.

Only when an invasion by Vietnam finally drove the Khmer Rouge from power in 1979 did the magnitude of the killings become truly known.

Khieu Samphan’s 2018 conviction was largely connected to crimes committed against Vietnamese and Cham minorities in Cambodia.

He was found not guilty of genocide against the Cham, a Muslim ethnic minority whose members had put up a small but futile resistance against the Khmer Rouge, for lack of evidence. But he was found guilty of genocide of the Vietnamese under the principle of joint criminal enterprise, under which individuals can be held responsible for the actions of a group to which they belong.

He was “found to have encouraged, incited, and legitimized criminal policies and to have made a significant contribution to crimes committed” by the Khmer Rouge.

During his trial, Khieu Samphan claimed the allegations against him were “Vietnamese propaganda” and said that while he had been aware of accusations of suffering under the Khmer Rouge, “the term murderer I categorically reject.”

After being ousted from power in 1979, the Khmer Rouge waged guerrilla warfare for another two decades before disintegrating. Pol Pot died in the jungle in 1998, and on Christmas Eve that year, Khieu Samphan surrendered along with Nuon Chea, the movement’s chief ideologue and its second-highest official.

Nuon Chea was convicted alongside Khieu Samphan in 2018 and died the following year.

The ECCC tribunal was established at Cambodia’s behest to bring to justice the leaders of the Khmer Rouge during its time in power.

Since the first judges and prosecutors took up their duties in 2006, however, the court has only successfully convicted three people in prosecutions that have cost some $300 million.

In addition to Nuon Chea and Khieu Samphan, the only other leader convicted was Kaing Guek Eav, also known as Duch, who as head of the Khmer Rouge prison system ran the infamous Tuol Sleng torture center in Phnom Penh. He died in 2020 while serving a life prison term for war crimes and crimes against humanity.

After the conviction of Khieu Samphan and Nuon Chea in 2018, the government of autocratic Prime Minister Hun Sen, himself a midlevel Khmer Rouge commander before defecting while the group was still in power, declared no more cases would go forward, saying they would cause instability.

Human rights attorney Theary Seng, who survived the Khmer Rouge genocide herself but lost her parents, criticized the trials as “political theatre” where Hun Sen and others have been “allowed, backed with U.N. insignia, to try themselves.”

Still, she said she planned to attend the opening of the appeal to see the case against Khieu Samphan to its conclusion.

“I have forgiven Khieu Samphan, as I have no intention for revenge, but that is not the same as holding him responsible,” she told The Associated Press in an email.

“I hold Khieu Samphan directly responsible for the murders of my mom and dad, and for taking my childhood away from me in forcing me into a living hell.”