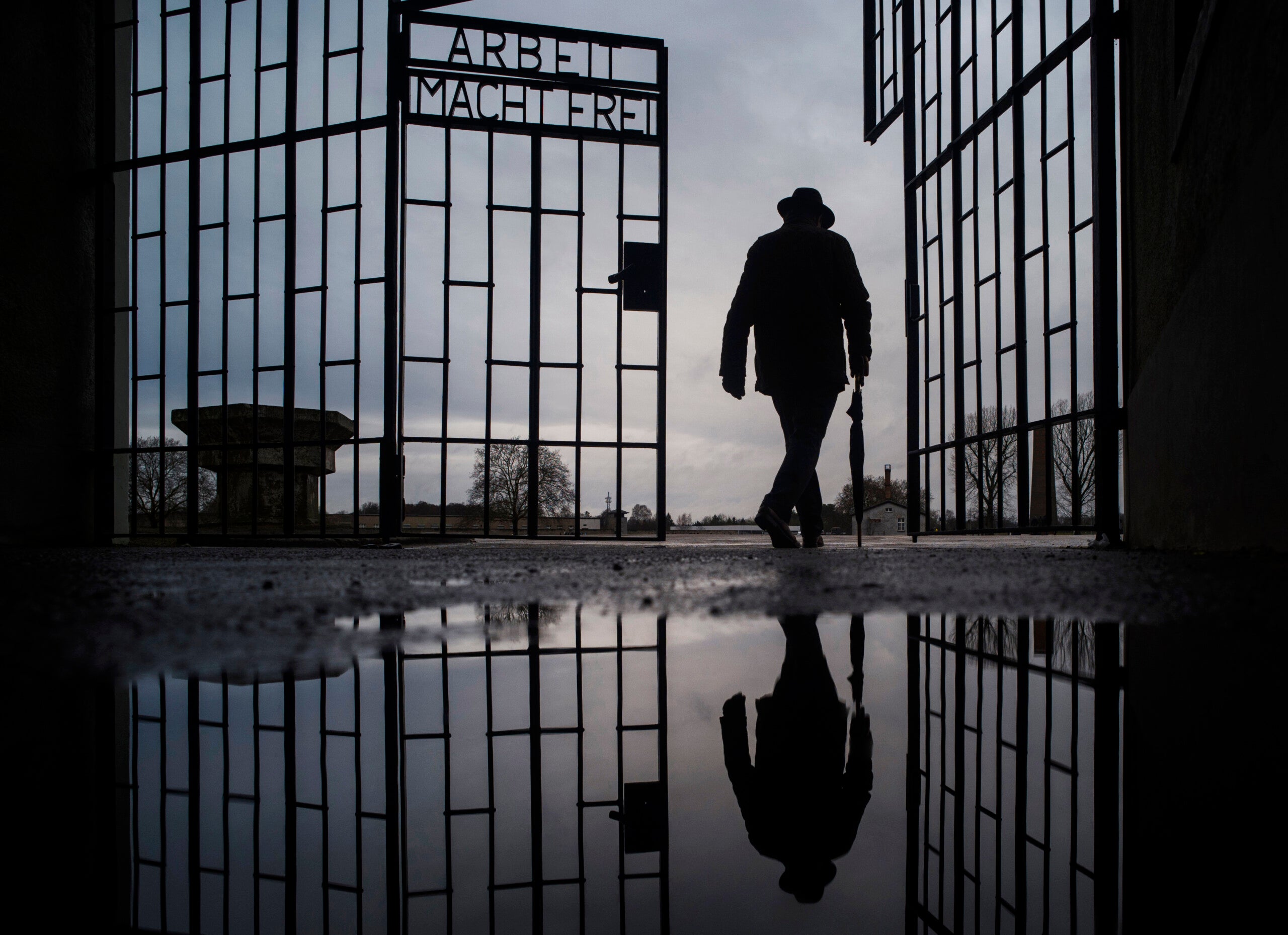 File - In this Sunday, Jan. 27, 2019 file photo a man walks through the gate of the Sachsenhausen Nazi death camp with the phrase 'Arbeit macht frei' (work sets you free) during International Holocaust Remembrance Day in Oranienburg, about 30 kilometers (18 miles), north of Berlin, Germany. German prosecutors say they have charged a 100-year-old man with 3,518 counts of accessory to murder on allegations he served as an SS guard at the Nazis’ Sachsenhausen concentration camp on the outskirts of Berlin. (AP Photo/Markus Schreiber, file)
by: DAVID RISING Associated Press
Posted: Feb 9, 2021 / 12:00 PM EST / Updated: Feb 9, 2021 / 12:01 PM EST

BERLIN (AP) — German prosecutors have charged a 100-year-old man with 3,518 counts of being an accessory to murder on allegations he served during World War II as a Nazi SS guard at a concentration camp on the outskirts of Berlin, authorities said Tuesday.

The man is alleged to have worked at the Sachsenhausen camp between 1942 and 1945 as an enlisted member of the Nazi Party’s paramilitary wing, said Cyrill Klement, who led the investigation of the centenarian for the Neuruppin prosecutors’ office.

The man’s name wasn’t released in line with German privacy laws. Despite his advanced age, the suspect is considered fit enough to stand trial, though accommodations may have to be made to limit how many hours per day the court is in session, Klement told The Associated Press.

The Neuruppin office was handed the case in 2019 by the special federal prosecutors’ office in Ludwigsburg tasked with investigating Nazi-era war crimes, Klement said.

It comes after prosecutors in the northern town of Itzehoe announced accessory to murder charges last week against a 95-year-old woman who worked during the war as the secretary of the SS commandant of the Stutthof concentration camp. That case and the charges against the 100-year-old man both rely on recent legal precedent in Germany establishing that anyone who helped a Nazi camp function can be prosecuted for accessory to the murders committed there.

Efraim Zuroff, the chief Nazi hunter at the Simon Wiesenthal Center, said the two new cases serve as “vital reminders to the dangers of anti-Semitism, racism and xenophobia.”

“The advanced age of the defendants is no excuse to ignore them and allow them to live in the peace and tranquility they denied their victims,” he said.

The new legal precedent was established in 2011 with the conviction of former Ohio autoworker John Demjanjuk as an accessory to murder on allegations that he served as a guard at the Sobibor death camp in German-occupied Poland. Demjanjuk, who steadfastly denied the allegations, died before his appeal could be heard.

A federal court subsequently upheld the 2015 conviction of former Auschwitz guard Oskar Groening achieved with the same line of reasoning, solidifying the precedent.

Before that, German courts had required prosecutors to justify charges by presenting evidence of a former guard’s participation in a specific killing, often a near-impossible task given the anonymity of most guards to the prisoners, coupled with the paucity of witnesses and the passage of time.

“The core of this case follows the decision of Demjanjuk and Groening, that being part of the functioning of this machinery of death is sufficient for an accessory to murder conviction,” Klement said.

The state court in Neuruppin, northwest of the town of Oranienburg where Sachsenhausen was located, now needs to evaluate the case and the fitness of the defendant, then set a trial date, Klement said.

Sachsenhausen was established in 1936 just north of Berlin as the first new camp after Adolf Hitler gave the SS full control of the Nazi concentration camp system.

It was intended to be a model facility and training camp for the labyrinthine network that the Nazis built across Germany, Austria and occupied territories.

More than 200,000 people were held there between 1936 and 1945, and tens of thousands died of starvation, disease, forced labor, and other causes, as well as through medical experiments and systematic SS extermination operations including shootings, hangings and gassing.

Exact numbers on those killed vary, with upper estimates of some 100,000, though scholars suggest figures of 40,000 to 50,000 are likely more accurate.

In its early years, most prisoners were either political prisoners or criminal prisoners, but also included some Jehovah’s Witnesses and homosexuals. The first large group of Jewish prisoners was brought there in 1938 after the Night of Broken Glass, or Kristallnacht, anti-Semitic pogrom.

During the war, it was expanded to include Soviet prisoners of war — who were shot by the thousands — as well as others.

Like in other camps, Jewish prisoners were singled out at Sachsenhausen for particularly harsh treatment, and most who remained alive by 1942 were sent to the Auschwitz death camp.

Thousands of Jews were brought back in later in 1944 to address labor shortages for work details that included clearing the streets of rubble in the German capital as well as in war production in regional factories.

Sachsenhausen was liberated in April 1945 by the Soviets, who turned it into a brutal camp of their own.