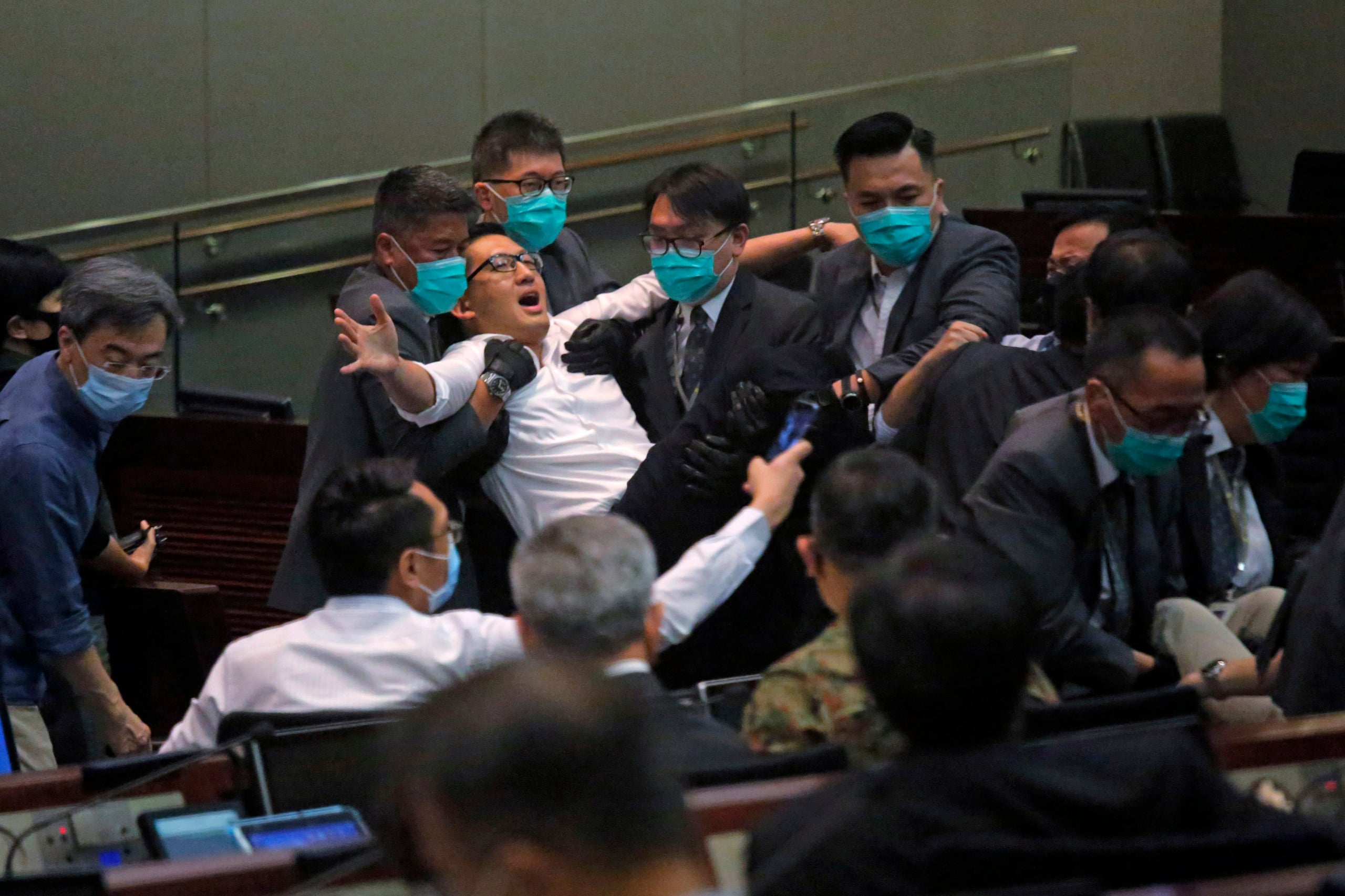 Pan-democratic legislator Lam Cheuk-ting, is taken away by security during a Legislative Council's House Committee meeting in Hong Kong, Monday, May 18, 2020. Scuffles broke out in Hong Kong's legislature for a second time this month, with security guards ejecting several pro-democracy lawmakers as the city's pro-democracy and pro-Beijing camps continue to wrestle for control over a key committee that scrutinizes bills. (AP Photo/Kin Cheung)
by: James Griffiths, CNN
Posted: May 18, 2020 / 05:20 AM EST / Updated: May 18, 2020 / 05:20 AM EST

(CNN) — There were scuffles in Hong Kong’s parliament Monday as lawmakers fought for control of a key committee chair.

Pro-Beijing and pro-democracy politicians have been arguing for weeks over the House Committee, which controls what bills are discussed by the semi-elected body. On Monday, they were due to elect a new chairman, with lawmakers who support the government expected to take control, clearing the path for a number of controversial bills — including one making it a crime to insult the Chinese national anthem.

The meeting quickly dissolved into acrimony and scuffles, as lawmakers arrived to find a pro-Beijing politician, Chan Kin-por, sitting in the chairperson’s seat, according to Hong Kong’s public broadcaster, RTHK.

A number of lawmakers were ejected from the chamber after scuffles with their colleagues and Legislative Council security guards, who pro-democracy members accused of having lost their impartiality.

Starry Lee, leader of the pro-Beijing DAB, the largest party in the body, was eventually elected with 40 votes. However opposition lawmakers said they would not recognize Lee.

“As you can see this is an illegitimate meeting, without any legal grounds, and Chan Kin-por in fact has exercised illegitimate power and so we don’t count Starry Lee as the chairman of the House Committee,” said Tanya Chan, one of the lawmakers ejected.

Dennis Kwok, a lawmaker with the pro-democracy Civic Party, had chaired the House Committee until he was stripped of his responsibilities last week by LegCo President Andrew Leung, following a controversial intervention by Beijing’s representatives in Hong Kong, who accused Kwok of “filibustering” and hinted at moving to have him expelled from the body.

“The reality in Hong Kong today is that whenever Beijing, whenever Carrie Lam and the pro-establishment don’t like something, they will do whatever it takes, including breaking the system that we have, the rules that we have,” Kwok said Monday.

It has been widely criticized by opposition figures and human rights organizations, but is likely to pass the body, in which pro-Beijing lawmakers hold the majority. The government hopes to do so before the current term ends in July, ahead of parliamentary elections in September.

Those elections, as well as the national anthem law, are likely to be a key theme of renewed anti-government protests, which have been gathering steam again after a prolonged break due to the coronavirus pandemic.