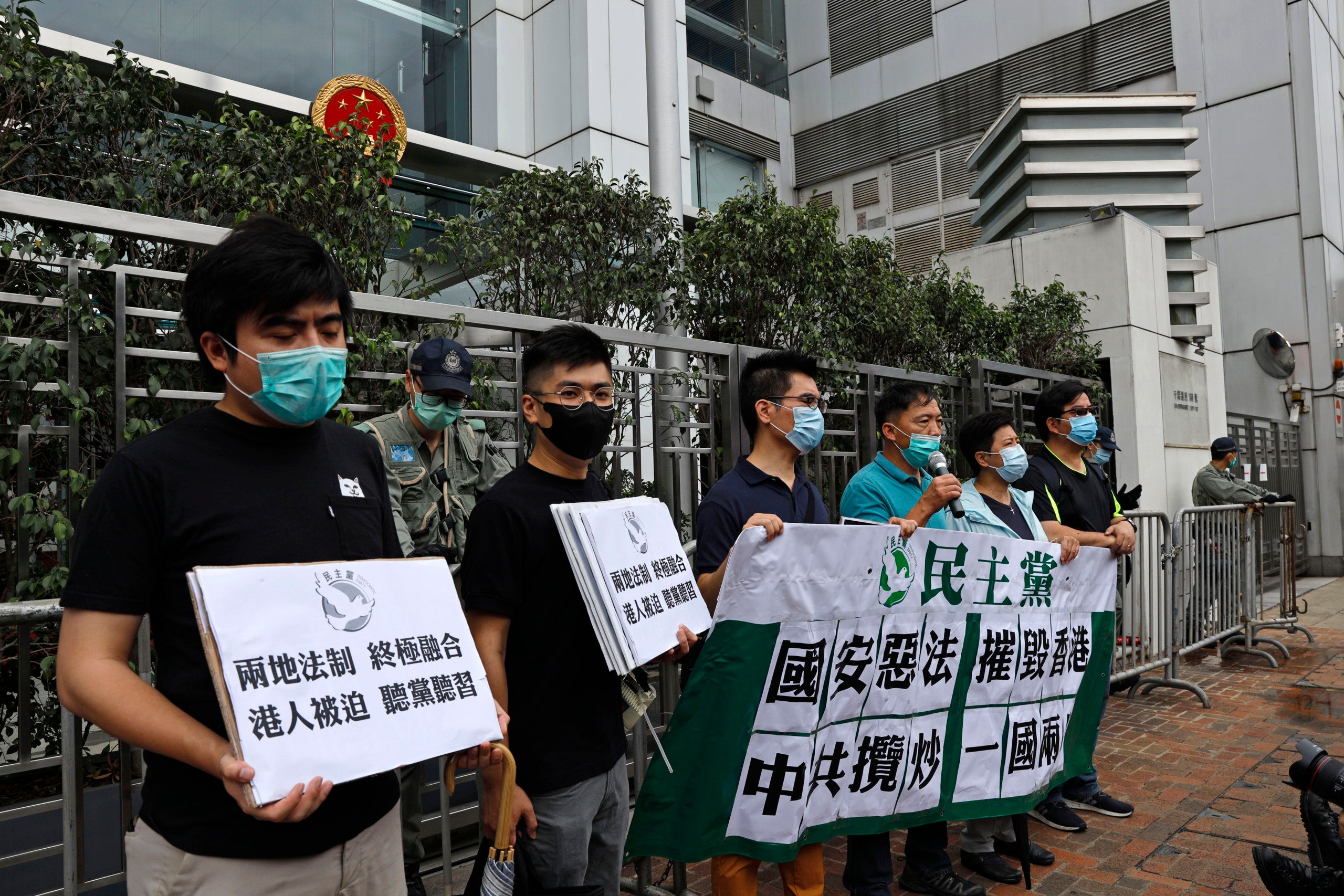 Members of the Democratic Party hold banner and placards during a protest in front of the Chinese central government's liaison office in Hong Kong, Friday, May 22, 2020. Hong Kong's pro-democracy lawmakers have sharply criticized China's move to take over long-stalled efforts to enact national security legislation in the semi-autonomous territory. They say it goes against the "one country, two systems" framework that promises the city freedoms not found on the mainland. The banner reads "Evil national security law destroys Hong Kong, Chinese Communists seek mutual destruction of one country two systems". (AP Photo/Kin Cheung)
by: ZEN SOO Associated Press
Posted: May 22, 2020 / 05:42 AM EST / Updated: May 22, 2020 / 05:43 AM EST

HONG KONG (AP) — Hong Kong pro-democracy lawmakers sharply criticized China’s move to take over long-stalled efforts to enact national security legislation in the semi-autonomous territory, saying it goes against the “one country, two systems” framework in which Beijing promised the city freedoms not found on the mainland.

The proposed bill, submitted Friday on the opening day of China’s national legislative session, is aimed at forbidding secessionist and subversive activity, as well as foreign interference and terrorism. It comes after months of pro-democracy demonstrations last year that at times descended into violence between police and protesters.

The bill, one of the most controversial items on the agenda of the National People’s Congress in years, drew strong rebukes from the U.S. government and rights groups. Despite that, Beijing appears to have lost patience and is determined to assert greater control in Hong Kong and limit opposition activity following last year’s protests.

He said at a news briefing by opposition parties and activists that the move shows Beijing is “directly taking control.”

“They’re trying to ban every organization in Hong Kong who dares to speak out against the Communist Party,” he said, describing it as a challenge to global values such as freedom and liberty.

Wang Chen, vice chairman of the National People’s Congress, said the protests and violence in Hong Kong had challenged the “one country, two systems” principle and the aim of the legislation was to stop any behavior that posed potential security threats.

Wang said Hong Kong’s legal system and enforcement must be established and improved “at the state level” to “change the long-lasting situation of defenselessness in the national security affairs in Hong Kong.”

A previous effort to pass such legislation in Hong Kong’s legislature was shelved after massive street protests in 2003. This time, Beijing has decided to circumvent the territory’s lawmaking body using what critics say are dubious legal grounds under the Basic Law, which has served as a sort of constitution for Hong Kong since its return to China from British colonial rule in 1997.

Hong Kong chief executive Carrie Lam said in a statement that the national security law “will not affect the legitimate rights and freedoms enjoyed by Hong Kong residents under the law, or the independent judicial power, including that of final adjudication, exercised by the Judiciary in Hong Kong.”

While the enactment of such legislation is required under Article 23 of the Basic Law, Beijing has decided not to try to ram it through the Hong Kong legislature, said Steve Tsang, director of the China Institute at the School of Oriental and African Studies in London.

Instead, it has chosen what he called a “worse option” by proposing the National People’s Congress enact a national security law for the territory.

“For many in Hong Kong, the NPC enacting for Hong Kong will be tantamount to the effective end of the ‘one country, two systems’ model,” Tsang said. “I find it hard to believe this will not trigger either a massive peaceful and orderly demonstration or more vocal and aggressive protests or, indeed, most probably, a combination of both.”

A return of violent protests would be a further drag on the territory’s creaking economy, prompting multinational companies to reconsider their presence and Washington to review its policy of granting Hong Kong more advantageous trade conditions than mainland China, Tsang said.

Hong Kong’s main stock market index fell 5.6% on news of the bill. Other Asian markets also declined due to concern about U.S.-Chinese tension, but none by such a wide margin.

Former Hong Kong leader C.Y. Leung defended the introduction of the legislation in an interview with Chinese state broadcaster CCTV. He warned that the pro-democracy opposition should not “underestimate the determination of the Chinese government to deal with the issues of Hong Kong.”

Pro-Beijing lawmaker Martin Liao said that Hong Kong had “legal obligations” to introduce national security legislation and since 23 years have passed and there is no foreseeable plan to do so, that now was a “proper time to deal with this.”

“For 23 years, in the absence of proper national security legislation, I think the central government has been very tolerant,” Liao said in a news briefing by the pro-Beijing camp.

Pro-democracy lawmaker Tanya Chan countered that the proposal violates the Basic Law. “It is a complete dishonor of promises made under the Sino-British Join Declaration, as well as all the promises made by the Chinese government to us and the world,” she said.