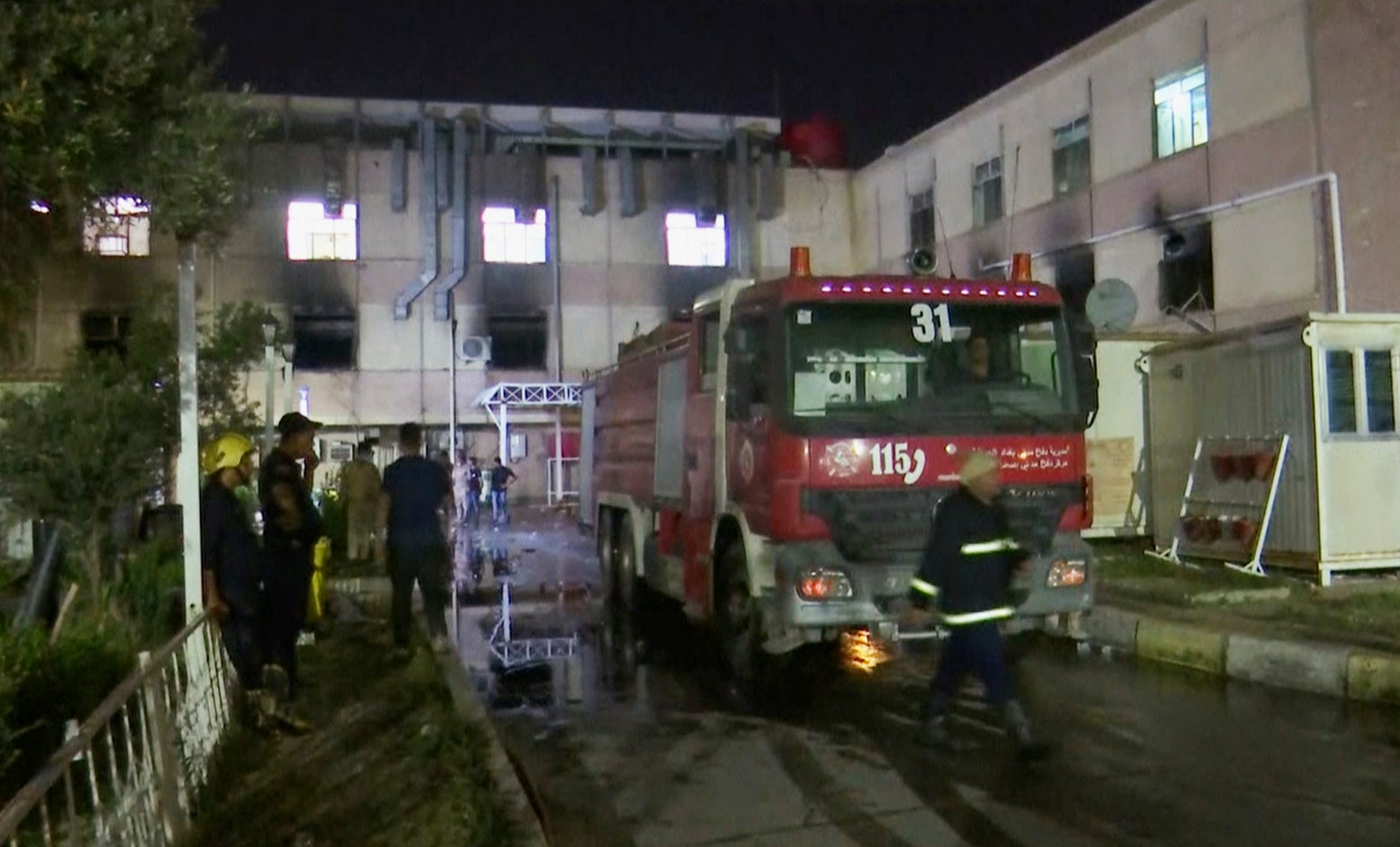 In this image made from video, first responders work the scene of a hospital fire in Baghdad on Saturday, April 24, 2021. The fire broke out in the Baghdad hospital that cares for coronavirus patients after oxygen cylinders reportedly exploded late Saturday, officials said. (AP Photo)
by: SAMYA KULLAB Associated Press
Posted: Apr 25, 2021 / 06:41 AM EST / Updated: Apr 25, 2021 / 06:41 AM EST

BAGHDAD (AP) — Iraq’s Interior Ministry said Sunday that 82 people died and 110 were injured in a catastrophic fire that broke out in the intensive care unit of a Baghdad hospital tending to severe coronavirus patients.

Negligence on the part of hospital authorities has been blamed for the Saturday night fire, which initial reports suggest was caused when an oxygen cylinder exploded in the ward of Ibn al-Khatib hospital. Iraq’s prime minister fired key hospital officials hours after the catastrophic incident.

Among the dead were at least 28 patients on ventilators battling severe symptoms of the virus, tweeted Ali al-Bayati, a spokesman of the country’s independent Human Rights Commission. The commission is a semi-official body.

Firefighters rushed to battle the flames that raged across the second floor of the hospital. Civil defense teams put out flames until the early hours of the morning.

Ambulances transported dozens of wounded. The Health Ministry said at least 200 people were rescued from the scene.

Doctors at the scene were frazzled by the chaos unfolding around them. They said numerous burned bodies were carried out by paramedics from the hospital floor.

By midday Sunday, relatives were still searching anxiously for unaccounted for loved ones.

“Please, two of my relatives are missing. … I am going to die (without news about them),” posted a young woman on social media after a fruitless search for her family members. “I hope someone can help us find Sadi Abdul Kareem and Samir Abdul Kareem, they were in the ICU.”

The fire came as Iraq grapples with a severe second wave of the coronavirus pandemic. Daily virus cases now average around 8,000, the highest since Iraq began recording infection rates early last year. At least 15,200 people have died of coronavirus in Iraq among a total of at least 100,000 confirmed cases.

In response to the fire, Prime Minister Mustafa al-Kadhimi fired the director-general of the Baghdad Health Department in the al-Rusafa area, where the hospital is located. He also fired the director of Ibh al-Khatib Hospital and its director of engineering and maintenance, according to a statement from the Health Ministry and his office.

After the fire first broke out, Al-Khadhimi held an emergency meeting at the headquarters of the Baghdad Operations Command, which coordinates Iraqi security forces, according to a statement on his Twitter account.

In the meeting he said the incident amounted to negligence.

“Negligence in such matters is not a mistake, but a crime for which all negligent parties must bear responsibility,” he said. He gave Iraqi authorities 24 hours to present the results of an investigation.

U.N. envoy to Iraq Jeannine Hennis-Plasschaert expressed “shock and pain” over the incident in a statement and called for stronger protection measures in hospitals.