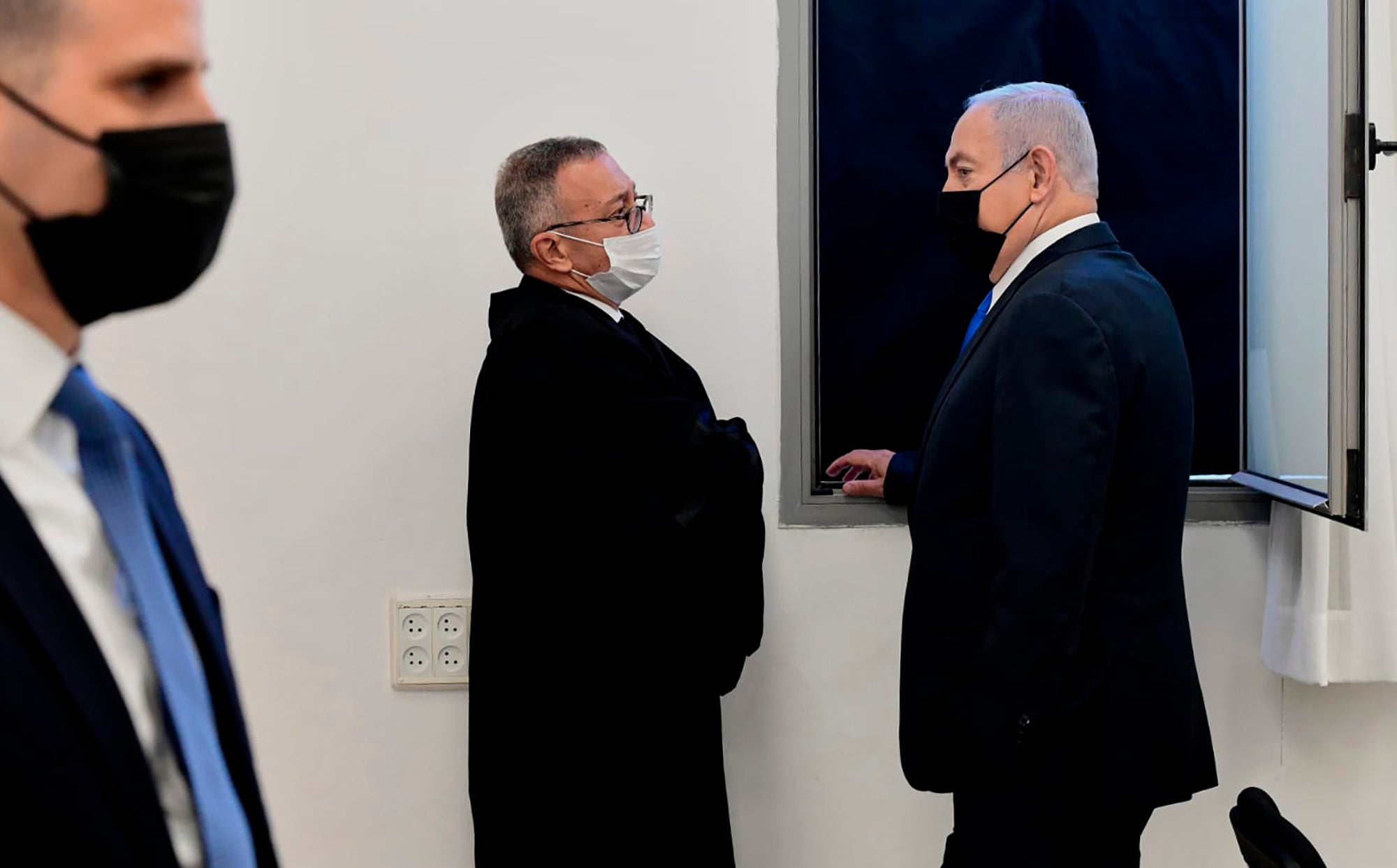 Israeli Prime Minister Benjamin Netanyahu, right, speaks with his lawyers prior to a hearing at the district court in Jerusalem, Monday, Feb. 8, 2021. Netanyahu appeared in a Jerusalem courtroom Monday to respond formally to corruption charges just weeks before national elections in which he hopes to extend his 12-year rule. (AP Photo/Reuven Castro, Pool)
by: Andrew Carey, CNN
Posted: Feb 8, 2021 / 04:51 AM EST / Updated: Feb 8, 2021 / 04:52 AM EST

(CNN) — Israeli Prime Minister Benjamin Netanyahu has told a Jerusalem court he is not guilty of one charge of bribery and three charges of fraud and breach of trust.

Monday’s appearance was Netanyahu’s second in court since his corruption trial formally began in May.

Netanyahu, wearing a black mask, entered the court shortly after 9 a.m. and stood to confirm that the pleas of not guilty, submitted earlier in written form by his lawyers, represented his reply to the charges.

“I confirm the written answer submitted in my name,” the Prime Minister told the judges.

Netanyahu, who is the first sitting Israeli Prime Minister to appear in court as a defendant, is charged in three separate cases.

In the most serious case, Netanyahu is accused of advancing regulatory benefits worth more than 1 billion shekels (more than $300 million) in favor of a telecommunications company controlled by a millionaire friend, prosecutors say. In exchange, Netanyahu received favorable coverage from a news site, even influencing wording and story selection, prosecutors allege.

Israelis vote in a general election in six weeks’ time, and in a possible indication of the Prime Minister’s desire to delay the prosecution opening and calling of witnesses, one of his most loyal party allies has called on judges to postpone further hearings until after the vote on March 23.

Allowing proceedings to continue at this time would constitute “gross interference in the election process by the judiciary,” Parliamentary Speaker Yariv Levin told newspaper Israel Hayom on Sunday.

Outside the court, dozens of anti-Netanyahu demonstrators gathered, many carrying the now-familiar “Crime Minister” placards.

His supporters were also out in number too, one of them carrying a banner saying, “You will never walk alone, Netanyahu.”

On Sunday evening, the Prime Minister put out a statement urging followers to stay home due to the pandemic.

“I know you want to give me strength in the face of the stitched-up and false cases against me. But we are in a time of mutation spreading in the world, even in Israel, so for your health I ask you – do not come tomorrow,” the statement said.

He went on in that statement to repeat his claim that his trial represents a coup-like attempt to remove him from office.

“Everyone understands that this is a transparent attempt to overthrow a powerful prime minister from the right and thus make a left-wing government led by [opposition leader Yair] Lapid.”

Under Israeli law, Netanyahu does not have to resign even though he is now on trial. Only if he is convicted, and any conviction is upheld through the appeals process, would he be forced to relinquish his office.