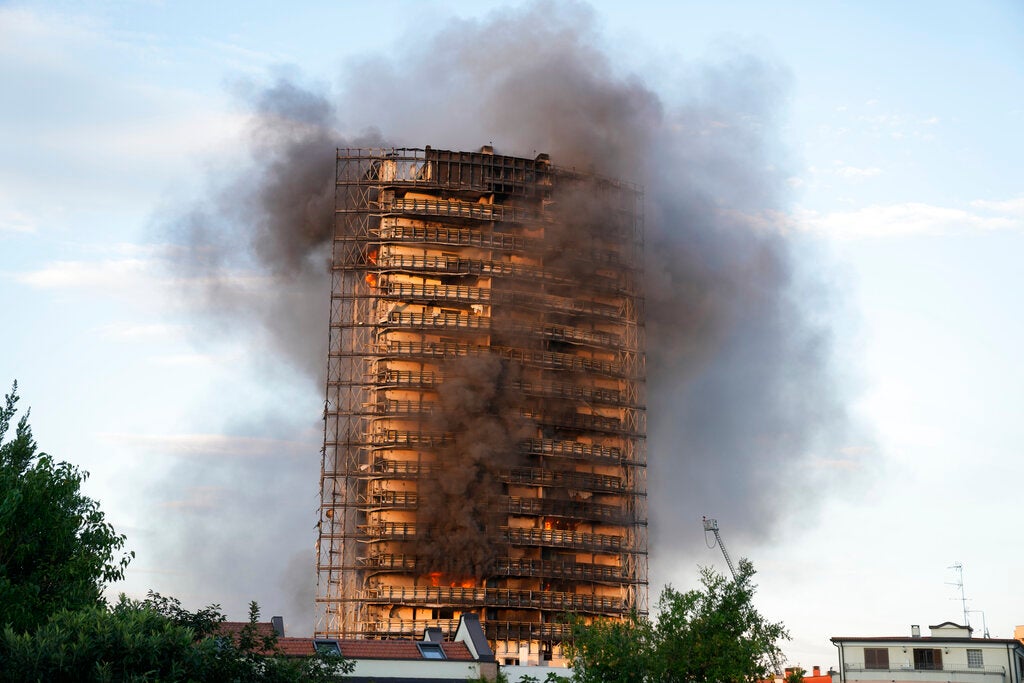 Smoke billows from a building in Milan, Italy, Sunday, Aug. 29, 2021. Firefighters were battling a blaze on Sunday that spread rapidly through a recently restructured 60-meter-high, 16-story residential building in Milan. There were no immediate reports of injuries or deaths. (AP Photo/Luca Bruno)
by: Associated Press
Posted: Aug 30, 2021 / 05:58 AM EST / Updated: Aug 30, 2021 / 05:59 AM EST

MILAN (AP) — Firefighters worked through the night to extinguish a blaze that destroyed a 20-story apartment building in Milan, but said that there was no indication that anyone was missing inside.

Some cases of smoke inhalation in were reported from Sunday’s blaze, but no serious injuries or deaths.

The fire was reported by a resident on the 15th floor, who sounded the alarm as he descended the building telling other occupants to evacuate. Residents of the building included Italian rapper Mahmood, who was the 2019 winner of the San Remo music festival.

Residents said the blaze quickly spread through the cladding on the façade, which was supposed to have been fire resistant, Corriere della Sera reported.

“The cause of the fires still needs to be determined, but it seems that the rapid spread of the flames was due to the thermal covering of the building,’’ said Carlo Sibia, an Interior Ministry official in Rome.

Firefighters broke through doors apartment by apartment in the search for anyone left inside and followed up by telephoning residents who remained unaccounted-for. “There is no evidence of anyone missing,” said commander Felice Iraca.

Firefighters were continuing searches of the building and verifying damage to the structure. Prosecutors also were investigating for any indication of wrongdoing.

The 60-meter (nearly 200-foot) tall building, part of a 2012 development project, was designed to look like the keel of a ship and included an aluminum sail on its roof, which burned and fell to the street in pieces.