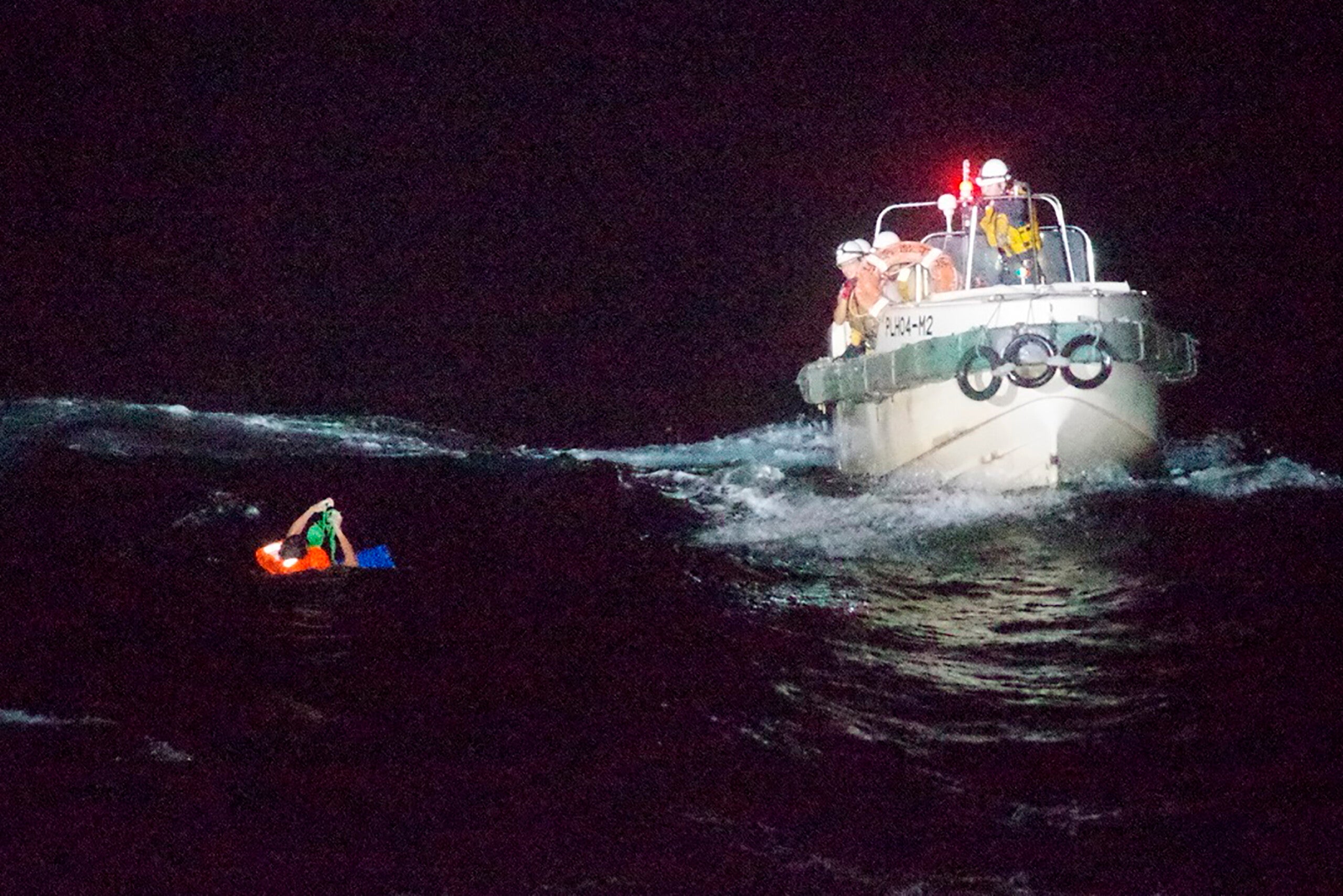 In this photo released by the 10th Regional Japan Coast Guard Headquarters, a Filipino crewmember of a Panamanian cargo ship is rescued by Japanese Coast Guard members in the waters off the Amami Oshima, Japan Wednesday, Sept. 2, 2020. Japanese rescuers have safely plucked the crewmember from the sea while searching for the cargo ship carrying more than 40 crew and thousands of cows went missing after sending a distress call off the southern Japanese island. (The 10th Regional Japan Coast Guard Headquarters via AP)
by: MARI YAMAGUCHI Associated Press
Posted: Sep 3, 2020 / 09:06 AM EST / Updated: Sep 3, 2020 / 09:06 AM EST

TOKYO (AP) — Japanese rescuers were searching Thursday for a livestock ship that a survivor said sank with 42 crew members aboard during rough weather off a southern Japanese island, the coast guard said.

A Filipino crew member was rescued late Wednesday after Japanese navy P-3C surveillance aircraft spotted him wearing a life vest and waving while bobbing in the water.

The man, who is currently hospitalized but in good health, told rescuers that the ship stalled when an engine stopped, then capsized after being hit by a powerful broadside wave and sank, coast guard regional spokesman Yuichiro Higashi said.

The survivor, a chief officer, said he quickly put on a life jacket and jumped into the sea, following an instruction in an emergency onboard announcement. He has not seen any other crew members since then, Higashi said.

The 11,947-ton Gulf Livestock 1 ship was carrying 5,800 cows west of Amami Oshima in the East China Sea when it sent a distress call early Wednesday. The weather was rough in the area due to Typhoon Maysak.

The typhoon has since passed the area and the weather during the search is fine, Higashi said.

The ship’s other crew members include 38 others from the Philippines, two from New Zealand and two from Australia.

The ship left the port of Napier in northeastern New Zealand in mid-August and was on its way to Tangshan on China’s eastern coast.

Its automatic identification system tracker gave its last position nearly two days ago, according to the ship-tracking website MarineTraffic.com. Based on that position, it was sailing in high winds of 58 knots (66 miles or 107 kilometers per hour), MarineTraffic.com said.

The ship’s operator, Gulf Navigation Holdings PJSC, based in Dubai, United Arab Emirates, declined to comment. The company, traded on the Dubai Financial Market, says it owns and operates chemical tankers, livestock vessels and other ships.