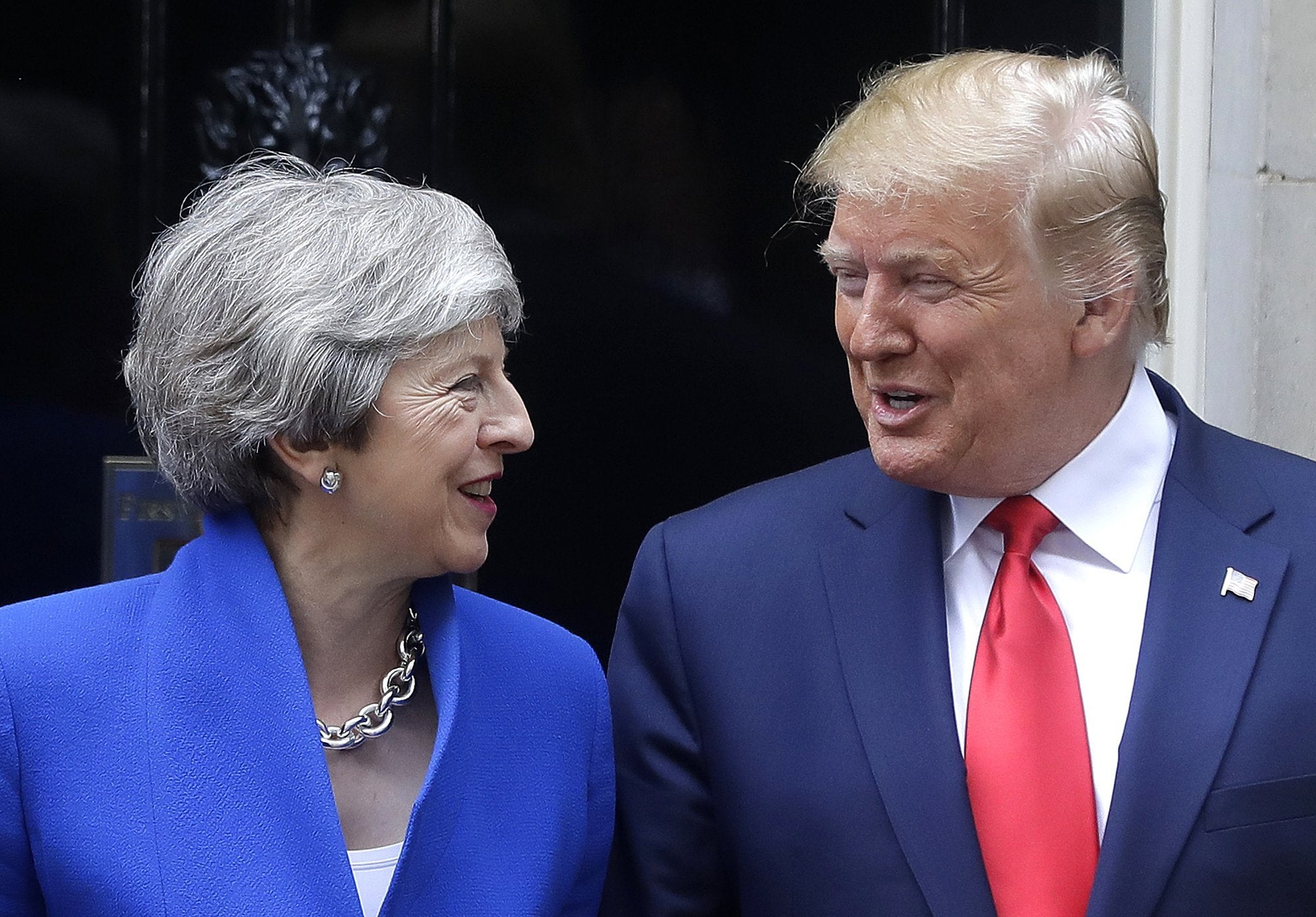 LONDON (AP) — Making nice at the end, President Donald Trump eased up Tuesday on his frequent criticism of outgoing British Prime Minister Theresa May over her handling of the tortured Brexit deal, declaring that history will remember her fondly if the United Kingdom can successfully leave the European Union.

The latest chapter in the allies’ storied “special relationship” played out as anti-Trump protesters — and the infamous Trump baby balloon — thronged the streets of nearby central London.

The president’s unexpected compliments for May come just days before she was set to resign the leadership of her party after failing to secure a Brexit deal. She will depart as prime minister once her successor has been chosen.

“I have greatly enjoyed working with you. You are a tremendous professional and a person who loves her country very much,” Trump told May at a news conference near the prime minister’s Downing Street office. But he couldn’t resist a slight dig, evoking the two years of broadsides he had lobbed at her by recalling that he urged her to sue the EU rather than try to negotiate a departure.

Trump said he would have “sued and settled, maybe, but you never know. She’s probably a better negotiator than I am.” And he added that the deal May came away with was a good one and “perhaps you won’t be given the credit you deserve.”

May, who fought back tears when she announced her resignation last month, voiced hope her successor will be able to achieve Brexit.

“I still believe —I personally believe— that it is in the best interest of the U.K. to leave the European Union with a deal. I believe there is a good deal on the table,” she said. “Obviously, it will be whoever succeeds me as prime minister to take this issue forward. What is paramount, I believe, is delivering on Brexit for the British people.”

Earlier in the day, Trump jokingly suggested that May “stick around” until a new U.S.-U.K. trade deal was brokered. May and her aides chuckled at that.

Trump said Britain and the U.S. would be able to strike a “phenomenal trade deal” once the U.K. had left the EU — music to the ears of pro-Brexit Britons. But, in words sure to alarm those in Britain concerned about Brexit, he said that “everything”— including the National Health Service — would be “on the table” in future trade negotiations.

Most Britons are protective of the state-run NHS, which delivers free health care to all, and many worry private U.S. health care firms could try to gain access to chunks of it as a condition of a trade deal.

On a separate issue, Trump said he anticipated “no limitations” on the future sharing of intelligence with the U.K. as the U.S. continues to press its longtime ally to ban Chinese company Huawei amid espionage and trade concerns.

Traditionally, U.S. presidents avoid injecting themselves into the domestic politics of other nations. But Trump didn’t hold back — right after claiming that he would not comment on Britain’s internal matters.

He renewed his praise of Conservative lawmaker Boris Johnson, who is campaigning to replace May as Conservative leader, and of another contender, Foreign Secretary Jeremy Hunt. He said he’d turned down a requested meeting from Labour Party leader Jeremy Corbyn, and took new swipes at one of his most vocal critics, London Mayor Sadiq Khan.

Trump previously had voiced support for a “hard Brexit,” which could have a devastating impact on the U.K. economy, according to many experts. That stands in contrast to a previous White House position that the departure should be as painless as possible. Others in the U.K. are pressing for a second referendum that could keep Britain in the EU.

As the pageantry of Trump’s British state visit gave way to politics, an economic meeting between the leaders at St. James’s Palace brought together 10 leading companies — five from the U.K. and five from the United States. CEOs and senior representatives from BAE Systems, GlaxoSmithKline, National Grid, Barclays, Reckitt Benckiser, JP Morgan, Lockheed Martin, Goldman Sachs International, Bechtel and Splunk were listed as attending.

While the corporate leaders gathered, protesters began to assemble across London, some of whom had balloon of a crying baby Trump bobbing in the air near Parliament Square. Leaders of Britain’s main opposition party were expected to join demonstrators at a rally in Trafalgar Square, just up the street from May’s Downing Street office. Also in Trafalgar Square: a 16-foot robotic likeness of Trump seated on a golden toilet.

Trump glossed over the protests, saying he saw “thousands of people in the streets cheering” and waving U.S. and U.K. flags, but just a “very, very small” group of protesters. “It was tremendous spirit and love. There was great love,” he said.

Trump and first lady Melania Trump toured the Churchill War Rooms, the British government’s underground command center during World War II, after the news conference. They were also to host a dinner at the U.S. ambassador’s residence, to be attended by Prince Charles, his wife, Camilla, and other dignitaries.

The day of meetings with May followed a whirlwind of pomp, circumstance and protest for Trump, who on Monday had lunch with Queen Elizabeth II and tea with Prince Charles before a grand state dinner at Buckingham Palace.

Following Tuesday’s focus on business and trade, Trump will use the next two days to mark the 75th anniversary of the June 6, 1944, D-Day landing, likely the last significant commemoration most veterans of the battle will see. The events will begin in Portsmouth, England, where the invasion was launched, and then move across the English Channel to France, where Allied forces began to recapture Western Europe from the Nazis.

French President Emmanuel Macron is expected to use the occasion to call for strengthening multinational ties the U.S. president has frayed.