Nation by nation, the world watches Election Day in the US 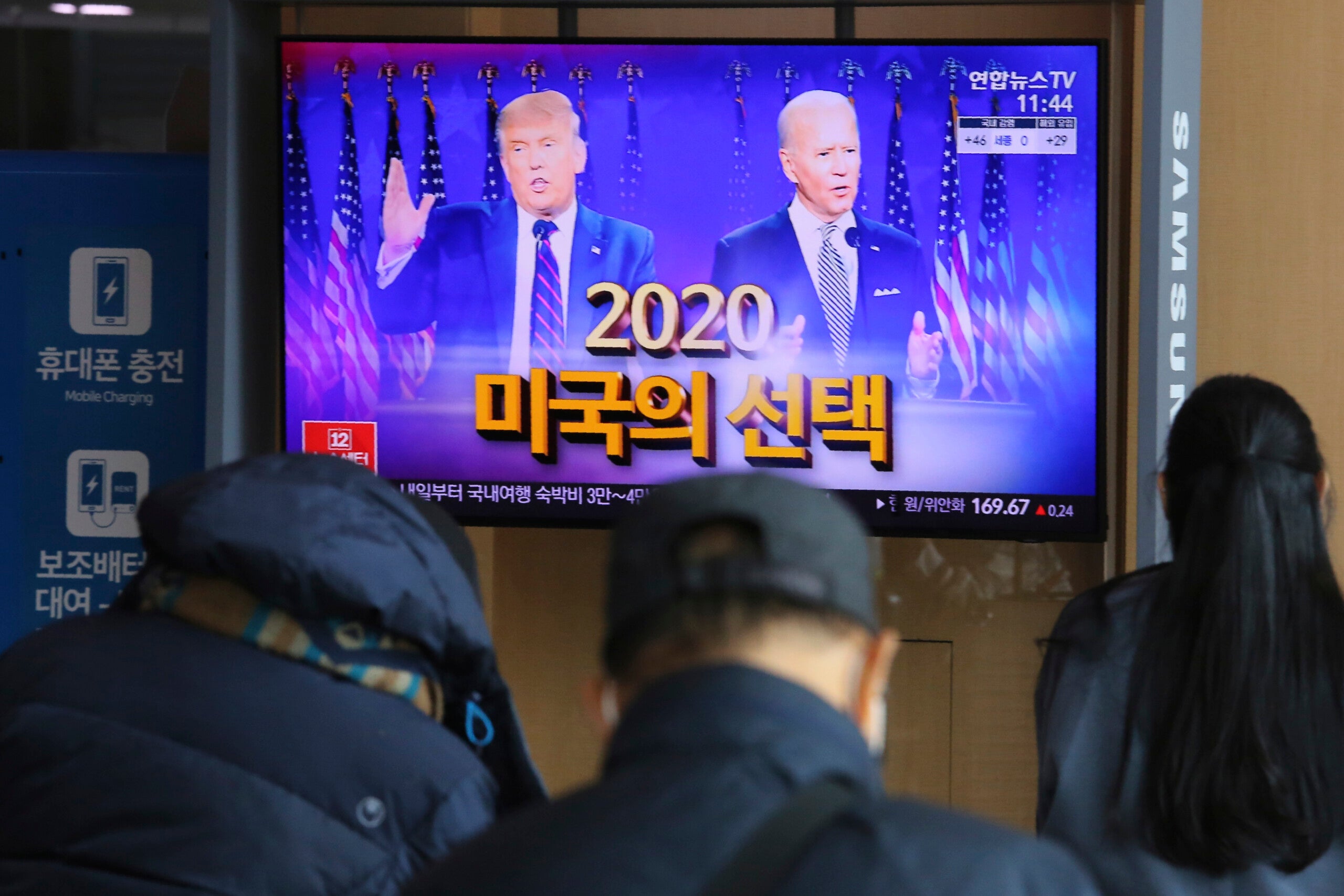 A TV screen shows images of U.S. President Donald Trump, left, and Democratic presidential candidate former Vice President Joe Biden during a news program at the Seoul Railway Station in Seoul, South Korea, Tuesday, Nov. 3, 2020. Nation by nation, how is Election Day in the United States being watched, considered, assessed? The Korean letters read "2020 America's Choice." For both North and South Korea, the fate of nuclear negotiations is top of mind as the two countries look at the U.S. election. (AP Photo/Ahn Young-joon)
by: Associated Press
Posted: Nov 3, 2020 / 09:42 AM EST / Updated: Nov 3, 2020 / 09:43 AM EST

(AP) — For four years, the world’s nations have watched as a very different American president engages with the international community — or doesn’t.

Longtime alliances have been strained, agreements wiped away, tariffs erected, funding withdrawn. Some nations have been the objects of presidential derision. Others, like North Korea, have been on the receiving end of diplomatic overtures once considered unthinkable.

For countries around the planet, the presidency of Donald Trump in its first term has been, it is safe to say, a singular experience to watch. Now that an inflection point in Trump’s time in office is at hand with Tuesday’s U.S. election, what’s at stake if his presidency ends — or if it continues? Nation by nation, how is Election Day in the United States being watched, considered, assessed?

Stay tuned to this file as Associated Press correspondents from around the world weigh in throughout U.S. Election Day with insight and analysis about how their regions view what’s happening in the United States — and what the various stakes might be.

For many Indians, the American election is personal.

The prospect that vice presidential candidate Kamala Harris — who has Indian origins — could occupy the second-highest political office in the U.S. has caught the imagination of millions of ordinary people in the world’s largest democracy.

But for their government, the election is all about the recent military and diplomatic convergence between the two countries to counter their shared rival China.

Despite some friction over trade issues, the India-U.S. relationship has steadily strengthened in security and defense cooperation in the last four years. It has largely been defined by public displays of bonhomie between President Donald Trump and Indian Prime Minister Narendra Modi, both seen as populists.

Modi’s second term has been marked by many convulsions at home: widening social strife, policies that discriminate against Muslims and the rising intolerance against minorities. Trump has mostly chosen to ignore them, partly as an effort to woo Indian American voters.

By contrast, Democratic challenger Joe Biden and running mate Harris have been vocal about Modi’s hardline Hindu-nationalist policies, including his administration’s decision to revoke disputed Kashmir’s semiautonomous powers. Should they win, India might expect to come under more pressure internationally for such policies.

But India might not see as big a difference between the candidates as other countries do.

“No matter who wins the election, the trajectory of the U.S.-India relationship will remain favorable,” said Michael Kugelman, deputy director of the Asia Program at the Washington-based Wilson Center. “There’s not much that Trump and Biden agree on, but India policy is one of the rare convergences.”

For both North and South Korea, the fate of nuclear negotiations is top of mind as the two countries look at the U.S. election.

With the talks in disarray, the election could have serious implications for North Korea’s relentless pursuit of an arsenal capable of targeting U.S. allies and the American homeland.

But negotiations — which seek to exchange an easing of crippling U.S.-led sanctions for disarmament steps by the North — have now stalled.

If Trump is reelected, some experts say the North would try to resume the summits. North Korea prefers a summit-driven process, which gives it a better shot at winning instant concessions, such as Trump’s surprise agreement to cease major U.S. military exercises with South Korea after his first meeting with Kim.

Democratic challenger Joe Biden, whom North Korea’s state media has called a “rabid dog” after he accused Trump of cozying up to dictators, has endorsed an approach that starts with meetings between lower-level officials. He has also demanded that the North show genuine willingness to abandon its nuclear weapons and missiles.

Some analysts say the North could try to pressure a Biden administration by resuming tests of nuclear warheads and long-range missiles it halted during its diplomacy with Trump. In a recent military parade in Pyongyang, Kim revealed a slew of new weapons, including what appeared to be North Korea’s biggest intercontinental ballistic missile yet.

South Korea, meanwhile, has struggled to deal with Trump, who has been less wedded to historic alliances than his predecessors. Trump has constantly complained about the cost of having 28,500 U.S. troops stationed in South Korea. A cost-sharing agreement expired in 2019, and the two sides have failed to agree on a replacement.

In an op-ed to South Korea’s Yonhap News last week, Biden vowed to strengthen the alliance.

But Biden would also be much more willing than Trump to strengthen sanctions and pressure North Korea.

“This could possibly force Seoul to choose between denuclearization and inter-Korean relations,” said Moon Seong Mook, an analyst for the Seoul-based Korea Research Institute for National Strategy.

It’s all about trade for China — and trade is about hitting economic growth targets at home and being a technology leader abroad.

The stormy commercial relationship between the world’s two biggest economies since President Donald Trump took office is front and center in China’s view of the U.S. election. While a win for Democratic challenger Joe Biden offers no guarantee of relief, Beijing hopes to avoid a further deterioration and see negotiations put on an even keel.

“People are concerned. They want to know what their future is to be,” said investor and prominent blogger Ding Chenling. “Whoever is the U.S. president has no choice: They will have to do business with China.”

Trump seized on longstanding concerns about Chinese commercial espionage, the forced handover of technology, and state subsidies for Chinese companies. He elevated them into a high-stakes tariff war launched in 2018, and last year tightened controls on Chinese purchases of computer chips and other high-tech components.

That could place a drag on China’s ambitions to be a global leader in cutting edge technologies and build, as it calls it, a “moderately prosperous society” at home, although the loss of access to U.S. technology is also motivating a drive for self-sufficiency.

Meanwhile, Trump’s vow that China would pay for allegedly cheating the U.S. consumer has yet to yield more balanced trade.

September exports to the U.S. rose 20.5% over a year ago to $44 billion as China’s factories continued to assemble most of the world’s smartphones, personal computers and consumer electronics, along with much of the clothing, housewares and toys sold in the U.S.

That means that, despite disruptions from trade tension and the pandemic, the ruling Communist Party is likely to hit its economic targets for the time being. Still, calming the stormy seas of trade could provide the long-term assurance Beijing’s leaders seek.

The next U.S. president could reshape the country’s relationship with President Rodrigo Duterte, who leads a key American treaty ally in Asia — but presents a dilemma.

Duterte has been regarded by international watchdogs as a human rights calamity for his notorious anti-drug crackdown that has left thousands of mostly poor suspects dead. He has been accused of undermining one of Asia’s most vibrant democracies — an American legacy.

Known for his expletive-laced outbursts, the 75-year-old leader is hypersensitive to criticism of his so-called war on drugs. He once told then-President Barack Obama in a speech to “go to hell.”

Unlike his predecessor, President Donald Trump has not publicly raised red flags over Duterte’s brutal campaign. Trump’s gambit won him cozier ties with Duterte, who called on Filipino Americans in March to vote Republican, saying, “you are getting the best deal with Trump.”

But the Filipino leader has pressed on with his anti-U.S. broadsides while nurturing ties with China and Russia. In February, his government notified Washington of its intent to terminate a key security pact, although he later delayed the effect of that decision.

“Do we need America to survive as a nation?” he asked. He essentially said, no.

While a Trump reelection would likely mean business as usual for Duterte, a Biden presidency carries the prospect of a stronger U.S. pushback against Duterte at the risk of further alienating the leader of a crucial ally with less than two years left in office.