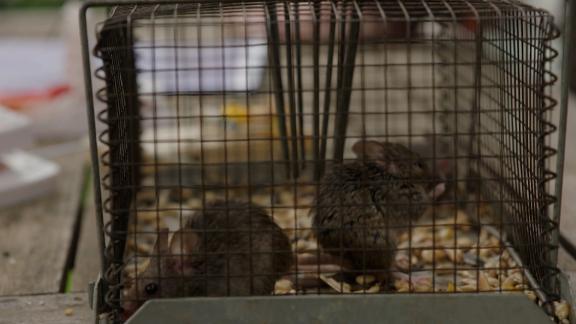 (CNN) — “The only good mouse is a dead mouse,” Australia’s Deputy Prime Minister declared this week, as New South Wales stepped up its war on mice with a plan to poison the plague infesting large parts of the state.

For months, mice have ravaged fields and infested homes in eastern Australia, from the Victoria border in the south all the way to the country’s northern state of Queensland, causing millions of dollars of damage to crops and machinery.

As winter approaches, the hungry rodents are even seeking shelter inside people’s houses, according to professional cleaner Sue Hodge.

In the small town of Canowindra, a four-hour drive west of Sydney, Hodge spends her days disposing of dead mice from traps in her clients’ homes. She cleans mouse excrement out of people’s kitchens, children’s rooms, and even their beds.

In her own home, just off the town’s main street, Hodge has blocked every nook and cranny with steel wool to stop mice from crawling in. “I can deal with mice and killing mice,” Hodge said defiantly, demonstrating how she sets the mouse traps each night. Her preference is for the snap-back model that ensures a quick death.

But the New South Wales government is looking at something far stronger.

On Thursday, officials announced they’d secured 5,000 liters of “one of the world’s strongest mice-killing chemicals” — a poison so potent it kills with one dose.

Not everyone is happy about that. Some have expressed concern that laying poison to save crops from feral mice could taint food crops and kill local wildlife.

The year the rain brought rodents

Almost as much rain fell in 2020 as in the previous two years combined, creating fertile ground for a bumper harvest.

“(We had) really bad years of drought, then a beautiful year in 2020, and this year is shaping up really well, too. But there’s always something,” Canowindra farmer Michael Payten sighed. “This year it’s mice.”

The bumper crops created by the abundant rain also created ideal conditions for the mice.

“We had a really good year last year, a lot of grain. We put a lot of hay in sheds and created these massive mouse hotels,” said Payten, referring to his tractor hay shed, which is now crawling with thousands of mice.

At least 800 to 1,000 mice per hectare is considered “plague” proportions by Australia’s National Science Agency, the CSIRO. Trying to count the number of mice plaguing eastern Australia right now would “be like trying to count up the stars in the sky,” said CSIRO researcher Steve Henry, described by the NSW Government as Australia’s best expert on mice plagues. But, he added, it’s basically “a moving feast.”

A pair of mice can produce 500 offspring more each season, according to the CSIRO, with females birthing a new litter every three weeks.

And those litters all need food.

As theygnaw away at Payten’s prized store of hay bales, needed to feed his sheep in winter, are being destroyed. “I’ll be really surprised if it’s going to be usable,” Payten said.

The loss of grain groups such as wheat, barley and canola, as well as fodder for animals, is having a hugefinancial impact on farm businesses, according to industry group NSW Farmers. A survey of businesses found a third had estimated losses between 50,000 and 150,000 Australian dollars ($38,000 and $116,000). Total costs could run into the hundreds of millions of dollars if urgent action wasn’t taken, the group warned in April.

When it comes to protecting his business from the worst mouse plague he said he’s seen in 40 years, Payten is as ruthless as local cleaner Sue Hodge.

“We’re burning a lot of straw to try to get rid of them,” he said. “We’re hoping that if we take their burrows away then that’ll expose them to a cold winter.

“I know it all sounds a bit cruel, but it’s a nightmare.”

‘Too dangerous’ to use

Now, the New South Wales government is wheeling out the heavy weaponry. After weeks of consultation between Henry, from the CSIRO, and farmers, it became clear the farmers needed help to end the mice plague.

Last week, NSW agriculture minister Adam Marshall announced “a fearsome suite of tools to manage mice,” including free rodenticide poison for farmers. And this week, it secured thousands of liters of bromadiolone, known as a “second generation anticoagulant” for its potency.

“As soon as the Commonwealth’s APVMA (Australian Pesticides and Veterinary Medicines Authority) gives us approval to use bromadiolone for baiting crop perimeters we can start to distribute it out through our treatment stations absolutely free of charge to farmers,” Marshall said in a statement on Thursday.

“By securing a local supply of the chemical we ensure the NSW Government is ready to roll — no waiting for overseas shipments, no immediate supply issues,” he said.

However, Charles Sturt University ecologist Dr Maggie Watson says the poison is “just too dangerous” for use anywhere in the environment.

Bromadiolone can leach into the soil and bioaccumulate in insects before being passed up the food chain, according to Dr Watson, who warns of the possibility of farmers unwittingly poisoning the food that they are trying to grow.

The NSW government is seeking approval to allow farmers to use it on the perimeter of their fields and says they trust the farmers to manage the poison correctly.

Native birds such as black-shouldered kites, boobook owls, barn owls, tawny frogmouths and Australian kestrels are all at risk of dying after eating a poisoned mouse, she said.

“You could completely reduce the population of birds of prey,” Watson said.”It could take 15-20 years for them to start coming back, and meanwhile we don’t have any natural controls for the next mouse plague that comes along.”

Bromadiolone is highly toxic, and so will likely kill some native predators, but proponents argue there just aren’t enough hawks and owls to keep the mouse population down naturally.

Meanwhile, the mouse population is growing so unsustainably high, farmers warn they’re running of time to harvest their winter crops.

A veteran of two previous mouse plagues in 1980s, Hodge, the cleaner, is upbeat.

It’s been months since the mice appeared in droves, but now she’s killing fewer mice inside homes. Her clients are following her tips like the steel wool trick.

“It’s actually a privilege for me to clean houses and get rid of all the mouse poo and let the owners come home and feel like they can relax for at least for a day,” she said.

“Until the mice come and poo again.”