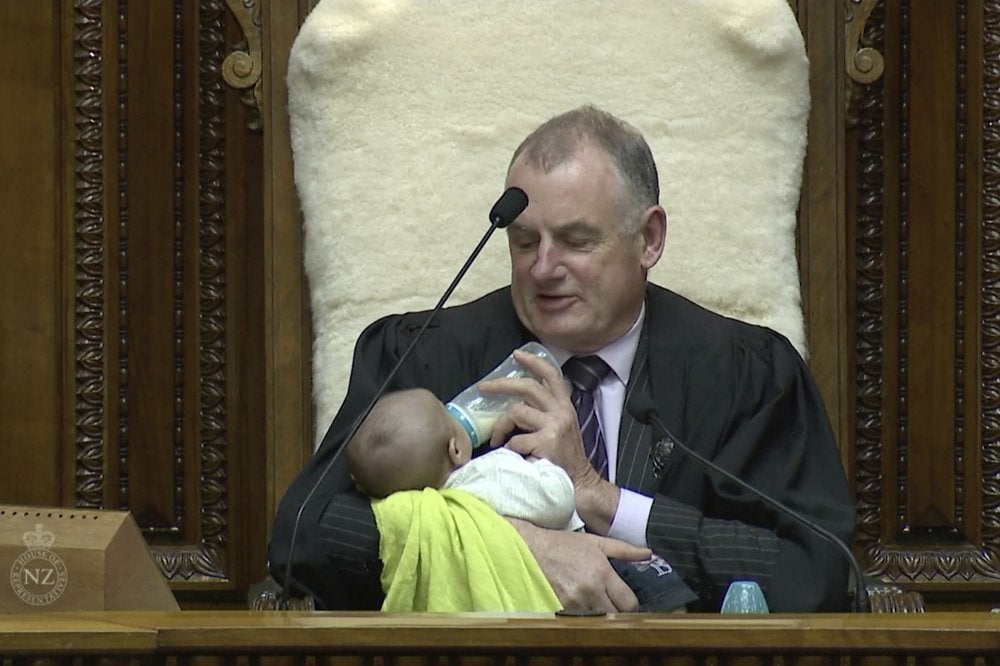 WELLINGTON, New Zealand (AP) — The man who presides over New Zealand’s parliament has been called a baby whisperer.

He was in action again this week, gently rocking, bottle feeding and burping a colleague’s infant as a lawmaker ranted about gas prices.

Mallard, who has six grandchildren, said he’s worked hard to help out his colleagues. And he’s been in plenty of demand: There are currently seven lawmakers with babies and he figures there have been a dozen since he began his role nearly two years ago.

“I enjoy cuddling them and seem to have some ability to settle them,” he said.

The most famous parliamentary infant is Neve, the daughter of Prime Minister Jacinda Ardern, who in June 2018 became just the second elected world leader in modern history to give birth while holding office.

Coffey said he’d just gotten back to work after he and husband Tim Smith had their baby via a surrogate mother last month. He said he doesn’t usually plan to bring his son to parliament but thought it would be good to let his colleagues meet and cuddle the boy and get some selfies with him.

He said he’s been getting plenty of messages after the images of Mallard spread far and wide.

“People talk about things going viral, but I’ve never experienced it before,” he said. “It’s also highlighted a case in Kenya.”

In that case from earlier this month, Zuleikha Hassan and her 5-month-old baby were ejected from the floor of the Kenyan National Assembly. Hassan said she had to bring the baby to parliament because she wasn’t able to make other arrangements, but temporary speaker Christopher Omulele said “As much as she might want to take care of her child, this is not the place for it.”

That’s not how Mallard sees it, even if the role does get a little messy sometimes.

He said that when he was burping Tutanekai, a little milk came up, which later required him to clean his official robes.