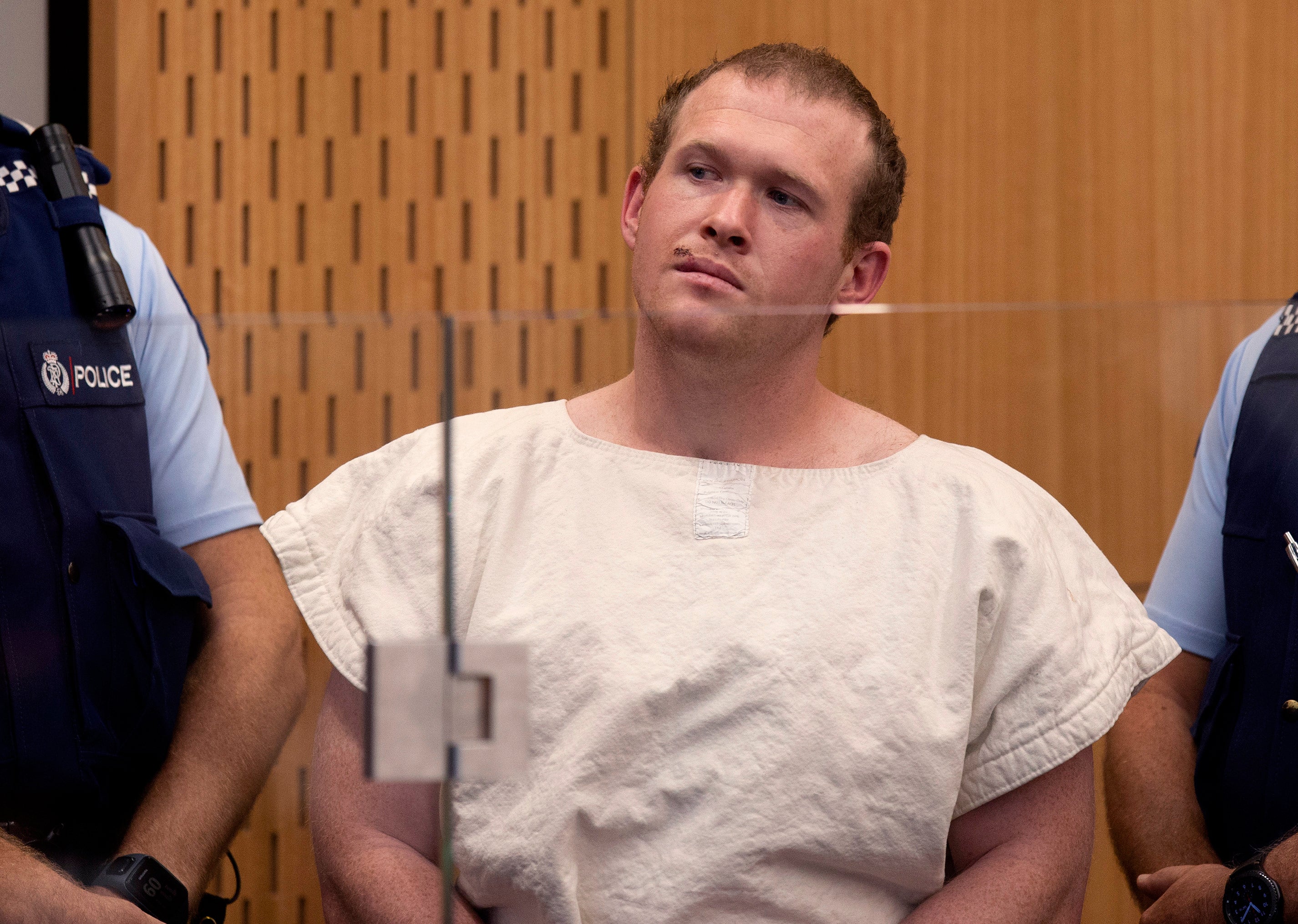 (CNN) — A far-right terrorist who killed 51 Muslim worshipers in New Zealand’s worst mass shooting in modern history will spend the rest of his life in prison with no chance of parole, the first time such a sentence has been handed down in the country’s courts.

The Australian citizen also pleaded guilty to 40 counts of attempted murder and one charge of terrorism –he is the first person in New Zealand to be convicted of thatcrime.

Tarrant represented himself at the hearing and chose not to address the court, but instructed lawyer Pip Hall to speak on his behalf. “Mr Tarrant does not oppose the application. He should be sentenced to life in prison without parole.”

Justice Cameron Mander turned to the convicted killer and asked him if he wanted to speak. “No. Thank you,” Tarrant quietly replied.

Justice Mander read the names of every victim, both the injured and the dead, telling Tarrant about the lives he destroyed or cut short. “You showed no mercy. It was brutal and beyond callous — your actions were inhumane,” Mander told Tarrant.

“As far as I am able to gauge you are empty of any empathy to your victims,” Mander added. “You have said you were in a poisoned emotional state at the time, and terribly unhappy. You felt ostracized by society and wanted to damage society as revenge.”

Thursday’s sentence came at the end of a harrowing four-day hearing at Christchurch High Court where 91 survivors and relatives of the victims described the pain Tarrant had inflicted on the Muslim community.

After his sentencing, Prime Minister Jacinda Ardern said nothing would take away the pain of the attack.

“Today I hope is the last where we have any cause to hear or utter the name of the terrorist behind it,” said Ardern, who has made a point of not saying extremist’s name. “His deserves to be a lifetime of complete and utter silence.”

New Zealand abolished the death penalty for murder in 1961, and judges cannot impose cumulative sentences for crimes that relate to the same incident, unlike in the United States. Murder carries a mandatory life sentence, although the sentencing judge specifies how long they need to spend in jail before they are eligible to apply for parole.

The Christchurch attack was unprecedented in New Zealand, a country of only five million people where gun killings are uncommon. The massacre prompted New Zealand to banmilitary-style semi-automatic weapons.The public rallied in support of the country’s 60,000-strong Muslim community.

During the sentencing hearing, Crown prosecutor Barnaby Hawes detailed the chilling timeline of the attack.

On March 15, Tarrant made the 4.5 hour drive from the South Island city of Dunedin to Christchurch, around 360 km (220 miles) away. At about 1.30 p.m. that day, as worshipers were taking part in Friday prayers, Tarrant sent a message to his family outlining his plans. He then activated a GoPro on his vest and began live streaming to Facebook, Hawes told the court.

Tarrant drove to Al Noor Mosque in an inner-city Christchurch suburb, where he killed 44 people and wounded 35. “He fired methodically into the bodies and heads of anyone still showing signs of life,” Hawkes said.

Tarrant then sped 6 km (4 miles) to the Linwood Islamic Centre where he killed seven people and injured another five.

As he ran back to his car for more ammunition, he was chased by Abdul Aziz Wahabazadah who threw an EFTPOS machine at the gunman’s head. Wahabazadah also picked up a rifle Tarrant had dropped and threw it at Tarrant’s car, shattering a glass panel. “You should thank God on that day I didn’t catch you. It would have been a different story,” Wahabazadah told Tarrantin courtWednesday.

After Wahabazadah gave his victim impact statement, Justice Mander told him: “I have seen the video and I want to acknowledge your courage.” Applause broke out in the public gallery.

Tarrant was on his way to a third scene in Ashburton — a town around an hour’s drive from Christchurch — but was stopped by police who rammed his car and arrested him without resistance.

During the hearing, the court was told that Tarrant began planning the massacre in September 2017 — 18 months before the attack. He got a firearms license and began stockpiling weapons and ammunition. He also took drone vision of the Al Noor Mosque, researched the mosque plans, and noted details about prayer times and important days in the Islamic calendar.

In an interview with police, Tarrant admitted “going into both mosques to kill as many people as he could.” Hawes told the court that Tarrant planned to burn the mosques to the ground and said he “wished he had done so.”

Hawes said Tarrant intended to instil fear into those he described as “invaders,” including the Muslim population and, more broadly, non-European immigrants.

Dozens of survivors and their supporters were given special exemptions from the government to enter the country so they could be at the sentencing.

Heavy security was in place around the courthouse and suppression rules prevented Tarrant from using the occasion to promote his extremist views.

During the four-day hearing, many victims directly addressed the man who had taken away their loved ones or attempted to kill them — and many asked the judge to give Tarrant the harshest possible sentence.

Before Tarrant, the heaviest sentence ever handed down was a minimum non parole period of 33 years for William Bell, who killed three people in 2001. That sentence was reduced to 30 years on appeal.

“Your actions were of gutless character of a person. There’s nothing heroic about your shooting, shooting people from behind and people not having a chance of defending themselves,” said Ahad Nabi, whose father was killed in the attacks. “My 71-year-old dad would have broken you in half if you had challenged him to a fight. You are weak.”

Ambreen Naeem lost both her husband Naeem Rashid and her 21-year-old son Talha Naeem in the attacks. In a statement read by a support person, she called the killings “inhumane” and said Tarrant’s punishment “should continue forever.”

Some told Tarrant that his true punishment would come later. “Know that true justice is waiting for you in the next life and that will be far more severe,” said Aden Diriye, whose three-year-old son was among the victims.

Noraini Milne, whose 14-year-old son Sayyad was shot in the back of the head while he knelt in prayer, told Tarrant: “You are already dead to me. Whatever punishment you get will never be enough.”

Many victims detailed the physical and emotional scars that they were still dealing with a year and a half on — and would continue to live with.

Turkish-born Temel Atacocugu, who was shot nine times at the Al Noor Mosque, said he played dead to save his own life. “I thought I was going to die and I tried to lie as still as possible when the gunman came back a second time,” Atacocugu said. “I could feel the blood and brains of the person next to me running down my neck. If I had moved, I wouldn’t be here today.”

He said that six bullets were removed from his body and three remained. Despite multiple surgeries, he remains in pain and is severely depressed. Although he continues to pray at the mosque, he has been unable to work since the shootings and has been forced to sell his business.

“I feel anxious and nervous with any sounds behind me, and when prayer has finished, I feel a sense of relief nothing has happened to me,” Atacocugu said. “The trauma will live with me forever, the images and smell of the mosque haunts me. I do not see a future without pain.”

Sazada Akhter, who will likely never walk again, described her horrific injuries through a support person.

“I am in a wheelchair for the rest of my life,” she said. “You will not stop me from achieving my dreams. While you are in prison please think about what you have done to me.”

Che Ta Binti Mat Ludin described hiding from the gunman in the women’s prayer room, and seeing dead bodies on the pathway as she left the mosque. After the shooting, she moved back to Malaysia. “I felt unsafe in Christchurch. I feel reluctant to socialize and do not feel like talking to people much.”

Nathan Smith, who is White and Muslim, said that he held a three-year-old boy in his arms at Al Noor Mosque, praying he was still alive. “He was not. You killed in my name,” he told Tarrant. “All you have done is cause great shame for Europeans around the world.”

“You have changed my life forever and I will never forgive you.”

Others struck a defiant tone, telling Tarrant that he had failed in his mission to spread hate — instead, he had brought the community closer together.

“My heart is broken, but we are not broken. You did that. Thank you for that,” Khaled Alnobani, a worshiper at Al Noor Mosque, told Tarrant in court.

Some, like Mirwais Waziri, who hails from Afghanistan, went off script. Rather than reading his victim impact statement, he told Tarrant: “I came here as a refugee and I’m not going anywhere. You are the loser — we are the winners.” There was applause from the public gallery as he spoke.

Mohammad Siddiqui, who spent eight days in hospital after being shot in the arm at Al Noor mosque, said he tried not to talk about the attacks because he did not want to give Tarrant the satisfaction.

“We have grieved, we have cried, yet we are stronger.”

Some even offered forgiveness for the man who had taken away their loved ones.

John Milne said he had forgiven Tarrant for killing his 14-year-old son. “You are a terrorist, a murderer but still a man. Not a single bullet hit me, but there’s a huge hole in my heart.

“If you get the chance, I would like you to say sorry.”

Janna Ezat said that she cries every day for her son Hussein Al-Umari who was killed in the attacks. She takes anxiety and anti-depression medication, and is still haunted by the image of her son’s body, which was returned to her on her birthday.

She told Tarrant that she had decided to forgive him.

“I don’t have hate and I don’t have revenge. I forgive. The damage is done and I have only one choice … I forgive you.”

Tarrant is likely to spend much of his sentence in solitary confinement, according to Waikato University law professor Alexander Gillespie.

That’s partly because allowing him to mix with the general prison population would give him a chance to spread his extremist views. It’s also because some prisoners are “going to want to kill him,” Gillespie said.

“He’s just going to have to be roped off for a very long time,” Gillespie said. “He will always have a target on his back.”

Gillespie said it was possible Tarrant would appeal his sentence in a bid to boost his notoriety.

There are calls in New Zealand for Tarrant to be sent to his native Australia to serve his sentence, especially given the enormous cost to the taxpayer of keeping him imprisoned for decades. According to a Cabinet paper that was made public earlier this year, 3.6 million New Zealand dollars ($2.35 million) was set aside to cover the cost of only his first two years in custody, suggesting that it could cost tens of millions of dollars each decade that Tarrant is locked up.

But currently, transferring Tarrant to Australia is not an option, Gillespie said. For that to happen, New Zealand and Australia would need to sign a prisoner transfer agreement.

“All Australians were and remain horrified and devastated by his despicable terrorist act.”

Whether Tarrant is sent to Australia or stays in New Zealand, the sentence will stay the same, Gillespie said.

“He’s never going to see the light of day again.”