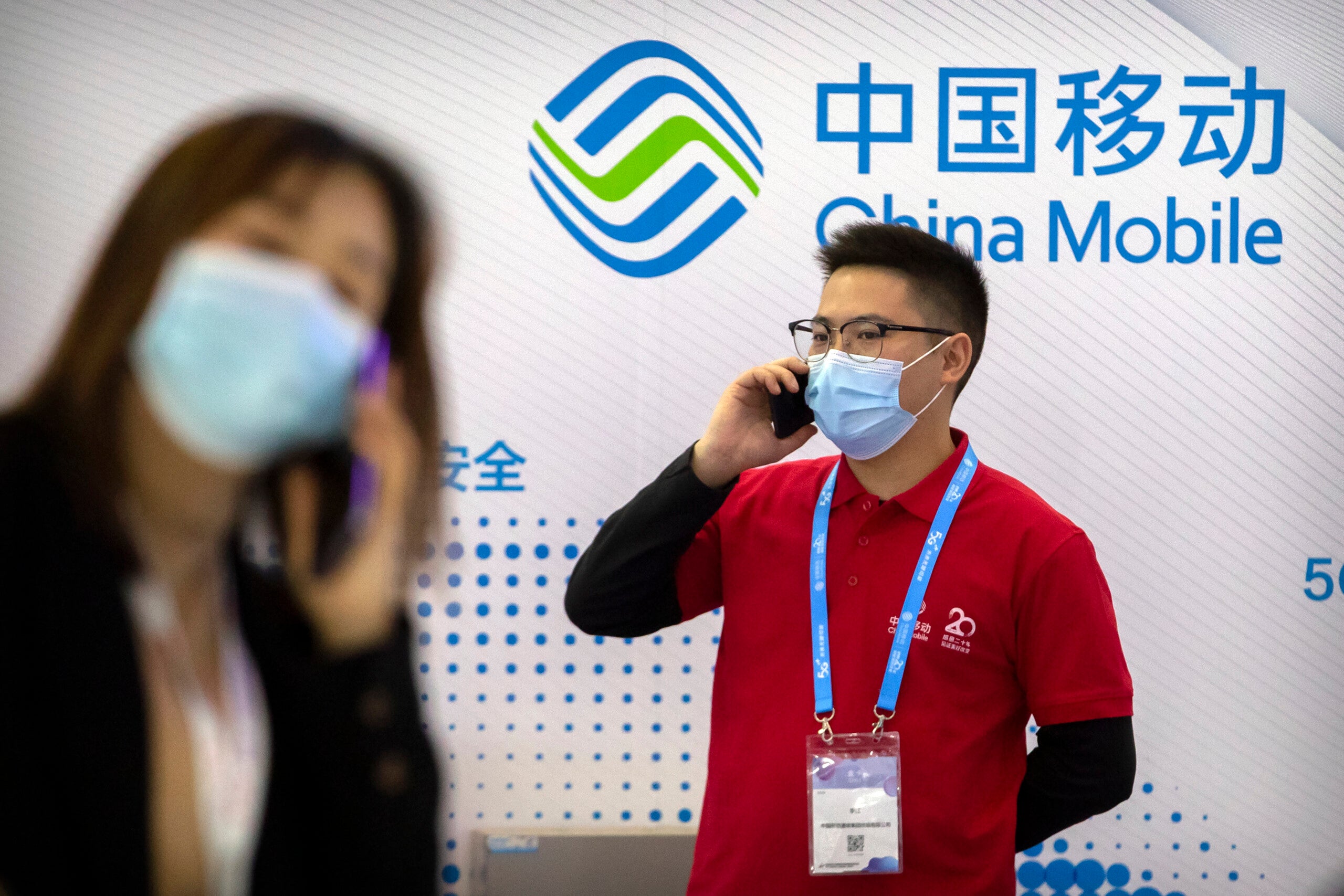 People wearing face masks to protect against the spread of the coronavirus talk on their cellphones near a booth for Chinese telecommunications firm China Mobile at the PT Expo in Beijing on Oct. 14, 2020. China said Saturday, Jan. 2, 2021, that it would take necessary countermeasures in response to the New York Stock Exchange's announcement that it would delist three major Chinese telecoms, in the latest flare-up of tensions between Beijing and Washington. (AP Photo/Mark Schiefelbein)
by: JOE McDONALD AP Business Writer
Posted: Jan 5, 2021 / 05:28 AM EST / Updated: Jan 5, 2021 / 05:29 AM EST

BEIJING (AP) — The New York Stock Exchange has withdrawn plans to delist shares of three Chinese state-owned phone carriers. The shares were to be removed under an order from President Donald Trump, a move Beijing had warned might lead to retaliation.

The exchange cited “further consultation” with regulators but its announcement late Monday gave no other details.

China’s foreign ministry on Tuesday criticized Washington for “suppressing foreign companies” but made no direct comment on the NYSE announcement.

The order added to mounting U.S.-Chinese tension over technology, security and spying accusations.

The Trump administration has imposed export controls and other sanctions on some Chinese companies, visa curbs on members of the ruling Communist Party and other restrictions.

“The suppression will have very limited impact on Chinese companies, but it will damage the national interest and image of the United States,” said a foreign ministry spokeswoman, Han Chunying. She expressed hope Washington will “do more to maintain the order of the global financial market” and protect investors.

Political analysts expect little change in policy under President-elect Joseph Biden, who takes office Jan. 20, due to widespread frustration with China’s trade and human rights records and accusations of spying and technology theft.

Trump’s November order bars Americans from investing in securities issued by companies deemed by the Defense Department to be part of efforts to modernize the Communist Party’s military wing, the People’s Liberation Army.

The 2 million-member PLA is one of the biggest and most heavily-armed militaries. It is spending heavily to develop nuclear submarines, stealth fighters, ballistic missiles and other advanced weapons.

The Pentagon has added 35 companies to its blacklist. In addition to the phone carriers, they include telecom equipment giant Huawei, China’s biggest maker of processor chips, three state-owned oil producers and construction, aerospace, rocketry, shipbuilding and nuclear power equipment companies.

The Chinese government has accused Washington of misusing national security as an excuse to hamper competition and has warned that Trump’s order would hurt U.S. and other investors worldwide.

On Saturday, the foreign ministry said Beijing would take unspecified “necessary countermeasures” to protect its companies.

The government made the same announcement following previous U.S. sanctions without taking action.