Over a thousand virus cases on French ship 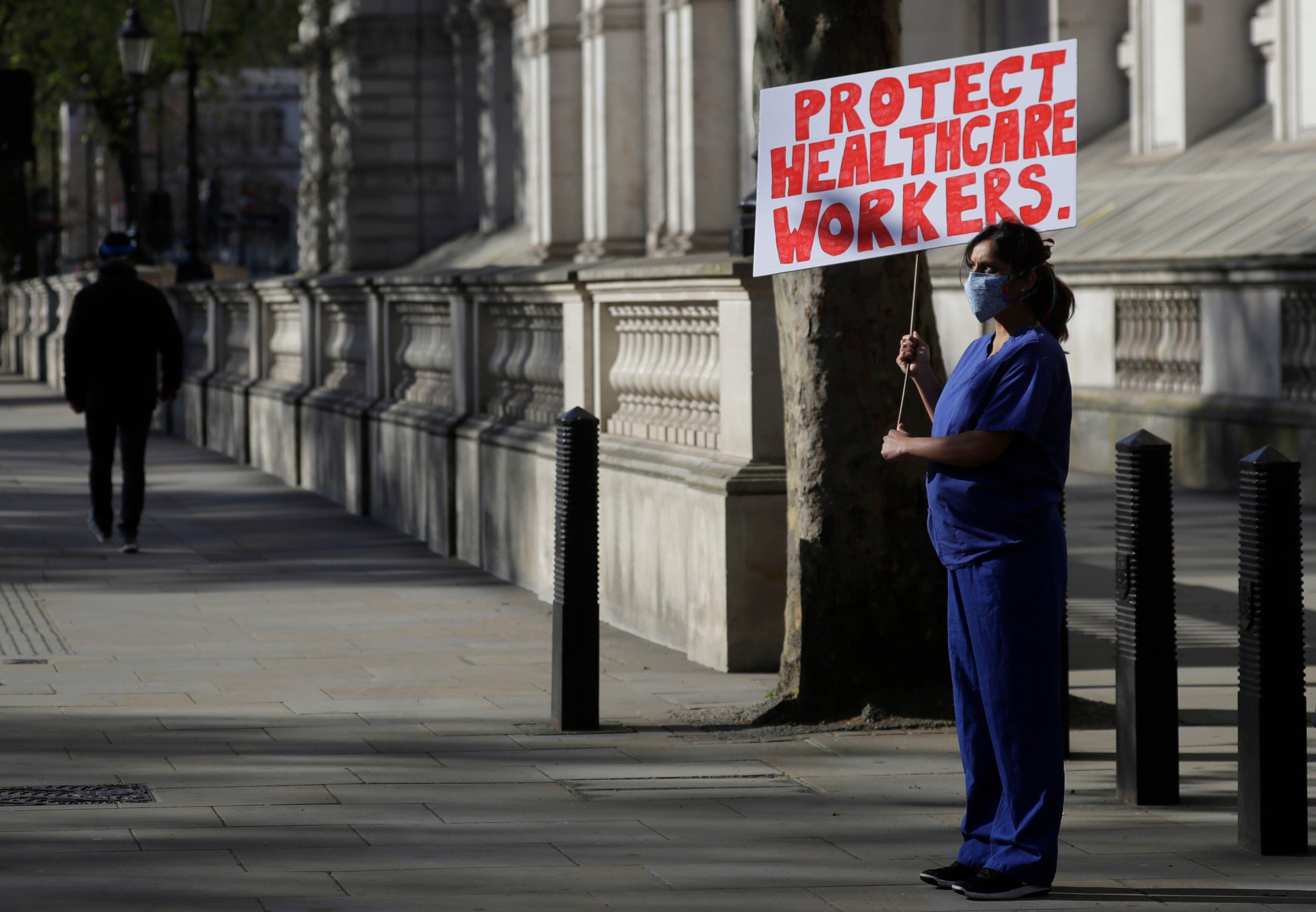 Doctor Meenal Viz holds a banner as she protests outside Downing Street in London, as the country is in lockdown to help curb the spread of the coronavirus, Sunday, April 19, 2020. The doctor who is pregnant protested about the lack of PPE and protection for NHS health workers. (AP Photo/Kirsty Wigglesworth)
by: The Associated Press
Posted: Apr 19, 2020 / 05:51 AM EST / Updated: Apr 19, 2020 / 05:51 AM EST

The Latest on the coronavirus pandemic. The new coronavirus causes mild or moderate symptoms for most people. For some, especially older adults and people with existing health problems, it can cause more severe illness or death.

TOP OF THE HOUR:

— South Korea to keep social distancing guidelines until May 5, will relax some limits

PARIS — Figures from France’s military leadership show more than half the sailors aboard the country’s flagship aircraft carrier contracted the new virus as the ship traveled through the Mediterranean Sea, the North Sea and the Atlantic Ocean.

A navy official says 1,046 of the 1,760 people aboard the Charles de Gaulle tested positive for the virus.

Navy Chief of Staff Adm. Christophe Prazuck attributed the quick spread to the “great population density aboard the ship.”

Speaking Saturday evening to Europe-1 radio, Prazuck said virus protection measures weren’t followed properly, which “did not allow us to detect the beginning of the epidemic, and therefore to contain it.”

The ship is undergoing a lengthy disinfection process since returning to its home base in Toulon last week.

One person who served aboard is in intensive care and more than 20 others are hospitalized. Among those infected are two U.S. sailors serving as part of an exchange program.

Investigations are underway into what happened, and French military leaders have been questioned in parliament.

A similar outbreak on the USS Theodore Roosevelt led to the firing of its captain and the resignation of the acting U.S. Navy secretary.

BERLIN — Germany is holding virtual commemorations for the liberation of two Nazi concentration camps 75 years ago, as long-planned anniversary events have had to be canceled due to the coronavirus pandemic.

Before the outbreak occurred, dozens of survivors had planned to attend the ceremonies.

In a video message, German Foreign Minister Heiko Maas recalled the over 20,000 people who died at Sachsenhausen concentration camp north of Berlin, noting that a minute’s silence for each of the victims would take two weeks.

Many of those killed at Sachsenhausen were Soviet soldiers. The camp was also used to intern Jews, political prisoners, gay people and Jehovah’s Witnesses from more than 40 countries.

The virtual ceremony also commemorated the liberation of nearby Ravensbrueck concentration camp.

Germany’s culture minister, Monika Gruetters, said the current closure of memorial sites due to the pandemic made it particularly important to hold virtual ceremonies and recall the atrocities committed by the Nazis.

Numerous further ceremonies are being affected by the lockdowns imposed to curb the virus spreading, including the 75th anniversary of the end of World War II on May 8.

CAIRO — Pope Tawadros II, the spiritual leader of Egypt’s Coptic Orthodox Christians, has held Easter services in an empty monastery in the desert amid coronavirus restrictions which kept the faithful from gathering at churches and monasteries across the country.

The services were held at the Monastery of Saint Pishoy, in a desert valley west of Cairo known as Wadi Natrun. Few clergies attended the services, which aired on Coptic Orthodox television station. The clerics were seen practicing social distancing during the prayers.

The Coptic Orthodox Church, one of the world’s oldest Christian communities, decided this month to suspend Easter prayers and celebrations at churches and monasteries because of the spread of the virus.

Christians constitute around 10% of Egypt’s more than 100 million predominantly Muslim population. Egypt has 3,032 cases including 224 deaths.

TAIPEI, Taiwan — Two dozen crew members of a Taiwanese naval ship have tested positive for the new coronavirus after returning from a nearly two-month training mission that took them to the Pacific island nation of Palau.

Taiwan’s Centers for Disease Control said Sunday that 21 more cases had been identified from a refueling ship, on top of three reported Saturday. More than 700 officers and sailors from the refueling ship and the two warships that took part in the mission are in quarantine for 14 days.

The CDC said that a Taiwanese student returning from the United States had also tested positive. That brought the total for Sunday to 22, an upward spike for the self-governing island. New cases had fallen to single digits in the past week, including three days in which none were reported.

SEOUL, South Korea — South Korea’s prime minister says the country will maintain much of its social distancing guidelines until May 5 but will relax some limits.

The comments by Chung Sye-kyun came hours after South Korea’s health authorities reported eight more coronavirus cases, the first time a daily increase has dropped to a single digit in about two months.

Chung says the government will stop “strongly advising” religious organizations, gyms and bars to suspend their operations and allow less risky outdoor public facilities, like recreational parks, to be reopened.

He says outdoor sports games also can be held if there are no spectators. He says the government will allow a limited number of essential employment- and license-related examinations to take place if stringent quarantine steps are in place.

Despite a recent continued downward trend, Chung says that “it’s definitely not time to feel relieved.”

While saying South Korea must find ways to revitalize the economy, Chung says the government will toughen its social distancing rules if the danger of a spread of the virus increases again.

Pakistan recorded 7,993 confirmed cases on Sunday, an increase of 514. Sixteen people died of the virus in the last 24 hours bringing the death toll to 159. But in Pakistan religious clerics have become a powerful force, holding sway often using fear of bringing mobs onto the street as leverage to force the government to bow to their demands.

Pakistan has been blamed for contributing to the outbreak of the virus in other parts of the world including Gaza after it refused to stop a gathering of tens of thousands of Tableeghi Jamaat (Islamic missionaries) until early March. By the time it was cancelled thousands were already in Pakistan and many returned to their countries infected. In Pakistan there are still several hundred of the Tableeghi jamaat in quarantine because they tested positive and hundreds more who spread throughout the country carrying the virus.

By some estimates nearly 2,000 confirmed cases in Pakistan can be traced to the Tableeghi Jamaat. Yet Khan’s government agreed Saturday to leave the mosques open and instead requesting the faithful to practice safe social distancing. The request is not likely to be followed after several prominent religious clerics called for adherents to pack the mosques.

TOKYO — Japanese Prime Minister Shinzo Abe’s unpopular handouts of old-fashioned cloth masks as part of his coronavirus measures faced complaints, as thousands of those sent to pregnant women were dirty..

The health ministry said over the weekend that it has received at least 1,900 cases of the problems reported by 80 municipalities that the masks came with stains, dust and other contamination. The dirty masks were among a half million masks that the government started sending to pregnant women in Japan as a priority last week. Abe announced a plan on April 1 to mail two cloth masks each to all 50 million households in Japan amid dire shortage of masks.

The faulty masks were the latest embarrassment for Abe’s government already criticized for its coronavirus measures inadequate, off-target, too little and too late.

The cloth masks also seem to have a size problem. When the masks also arrived at elderly care centers, television talk shows showed some caregivers struggling to fit the mask, saying the it was too small to cover both nose and mouth at the same time.

The ministry said it has urged mask makers to resolve the contamination problem, while asking municipal officials to visually inspect the masks before mailing them.

SINGAPORE — Fast food giant McDonald’s says it will suspend all operations in Singapore for two weeks from Sunday after seven of its employees tested positive for the coronavirus.

McDonald’s said in a Facebook post it decided to follow the health ministry’s advise to shutdown until May 4 when Singapore’s partial lockdown ends as part of a preventative action in the battle against the COVID-19 outbreak. It said it would continue to pay the salary of 10,000 employees working in more than 135 outlets across the city-state during this period.

The fast-food chain, which serves six million customers every month, didn’t give further details. Seven of its employees working in several outlets have been diagnosed with the virus in the past week.

The city-state Saturday reported a record daily jump of 942 new infections, the highest one-day spike seen in Southeast Asia, to bring its total to 5,992. The government has made it mandatory for people to wear masks outside them homes and imposed strict social distancing measures.

SEOUL, South Korea __ South Korea has urged its 51 million people to keep following social distancing rules though the country’s daily increase in coronavirus infections fell to a single digit for the first time in two months.

Jeong Eun-kyeong, director of the Korea Centers for Disease Control and Prevention, said Sunday vigilance against the virus must be maintained because outbreaks abroad haven’t been stabilized and untraceable local infections have been continuously reported.

Jeong said that “a downward trend in new infections (in South Korea) is good news but I’m sorry to say that we cannot make an optimistic prediction” on the prospect for the coronavirus pandemic.

She says health officials are staying alert for possibilities that there are unrecorded patients whose whereabouts are unknown or patients with no or minor symptoms could trigger mass group infections. She says that about 30 percent of the total cases in South Korea had no symptoms when they were diagnosed with the coronavirus.

She says the coronavirus has shown “a scary contagiousness.”

Earlier Sunday South Korea confirmed eight more cases of the coronavirus, the first time a daily increase has dropped to a single digit in about two month.

COLUMBIA, S.C. — South Carolina retail stores and public beach access points that had been closed to halt the spread of the coronavirus will be allowed to reopen next week, The Post and Courier reported Saturday.

Gov. Henry McMaster will issue orders Monday to allow for the reopenings to take place on Tuesday, the governor’s chief of staff, Trey Walker, told the newspaper.

The order will apply to numerous nonessential stores, including department stores, flea markets, florists, bookstores and music shops. Grocery stores, pharmacies, home improvement stores and medical facilities have been allowed to stay open during the pandemic.

Occupancy in each store will be limited to five customers per 1,000 square feet of retail space or 20% occupancy, whichever is less, the newspaper said.

Local governments will still be allowed to make their own rules about waterway access.

The governor’s stay-at-home order will remain in place, as will the ban on eating inside restaurants, Walker said.