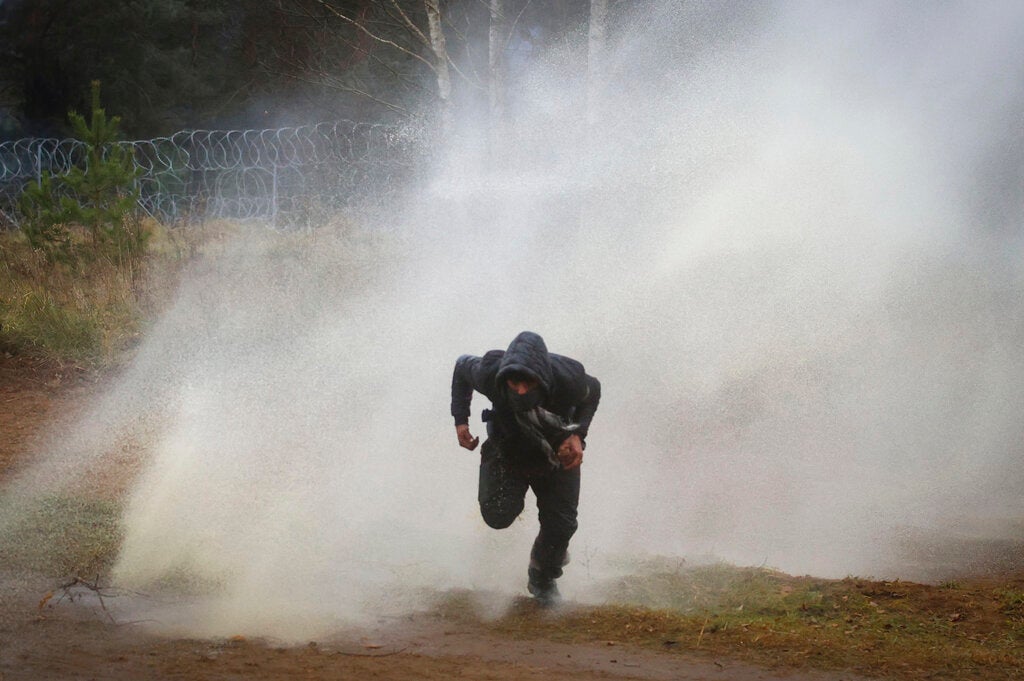 A man runs away from a water cannon during clashes between migrants and Polish border guards at the Belarus-Poland border near Grodno, Belarus, on Tuesday, Nov. 16, 2021. Polish border forces say they were attacked with stones by migrants at the border with Belarus and responded with a water cannon. The Border Guard agency posted video on Twitter showing the water cannon being directed across the border at a group of migrants in a makeshift camp. (Leonid Shcheglov/BelTA via AP)
by: VANESSA GERA and DARIA LITVINOVA Associated Press
Posted: Nov 16, 2021 / 10:06 AM EST / Updated: Nov 16, 2021 / 10:06 AM EST

WARSAW, Poland (AP) — Polish border forces said they were attacked with stones by migrants Tuesday at the border with Belarus and responded by using water cannons against them. Police said the migrants were given gas grenades and other weapons by Belarusian forces, who directed the entire violent operation with a drone.

The situation marked an escalation in a tense migration and political crisis at the eastern border of the European Union and NATO in which the lives of thousands of migrants who are being used as proxies by Belarus are at stake.

The Poland Border Guard agency posted video on Twitter showing a water cannon being directed across the border at a group of migrants in a makeshift camp in freezing weather.

Polish police said one officer was seriously injured when the migrants threw objects and he was taken by ambulance to a hospital for a likely skull fracture.

The Border Guard spokeswoman, Anna Michalska, said an estimated 2,000 migrants were at the border crossing but only about 100 were believed to be involved in attacking the Polish forces.

In reaction, Belarus’ State Border Guard Committee said it was launching an investigation into Poland’s use of force.

“These are considered violent actions against individuals who are on the territory of another country,” the Committee spokesman Anton Bychkovsky was quoted by Belarus’ state news agency Belta as saying.

The EU accuses the authoritarian regime of Belarusian President Alexander Lukashenko of orchestrating a migration crisis at the borders of three of its members — Poland, Lithuania and Latvia — to try to destabilize the entire 27-nation bloc.

Some of the migrants are at the Poland-Belarus border with children. Most are fleeing conflict, poverty or hopelessness in Syria and Iraq and hope to reach western Europe. To date there have been reports of 11 deaths.

The Defense Ministry said Belarusian forces tried to destroy fencing along the countries’ common border and the Interior Ministry posted video apparently showing migrants trying to tear down a fence. It said the migrants are using stun grenades or similar weapons given to them by Belarusian officers who are no longer trying to conceal their engagement in stirring violent incidents.

Poland has taken a tough stand, reinforcing the border with riot police and troops, rolling out coils of razor wire and making plans to build a tall steel fence. The Polish approach has largely met with approval from other EU nations who are keen to stop the arrival of another migration wave.

Yet Polish authorities have also been criticized by human rights groups and others for pushing migrants back across the border and not allowing them to apply for asylum.

Polish officials have often said that Russia bears some responsibility for the crisis at the border given Moscow’s alliance with Belarus. The Russian government has denied responsibility.

There was no way to independently verify what was happening at the border, because Poland’s state of emergency has blocked reporters and human rights workers from the border area. In Belarus, journalists face severe restrictions on their ability to report.

At one point Tuesday, a Polish independent broadcaster, TVN24, was forced to rely on CNN in order to show a picture of the border not filtered through government authorities.

Poland’s parliament is expected Tuesday to consider a bill that would regulate citizens’ ability to move in the area of the border with Belarus after the state of emergency ends this month.

The EU has been putting pressure on airlines to stop transporting Syrians, Iraqis and others to Belarus — and the efforts were bringing changes.

According to a travel agency in Beirut, flights from the Lebanese capital to the Belarusian capital of Minsk had been stopped until further notice. By Tuesday afternoon, the single evening flight by Belavia, the Belarusian national airline, appeared as “cancelled” on the Beirut’s International Airport website.

Meanwhile, the Iraqi government is urging its citizens trapped at the Poland-Belarus border to return home.

Some 200 Iraqis who arrived in Belarus with the intention of crossing into the EU reached out to the Iraqi embassy in Russia and expressed a desire to return home, an embassy spokesman told the Interfax agency on Tuesday. The spokesman added that an evacuation flight will take place on Thursday from Minsk and Belarusian authorities have helped bring migrants back from the border.

On social media platforms used by Syrians and Iraqis to navigate the Belarus-Europe track, migrants posted pictures of large crowds gathering along the borders overnight. Some appeared undeterred by the restrictions, posting that they received support in terms of warm clothes and boots for the wet, cold weather. Some messages celebrated those who managed to cross despite the restrictions. A few messages urged migrants to head to the Lithuania-Belarus border.

Some of the posts described harsh treatment, including beatings, by Belarusian border guards, but most postings were a recognition that the migration route through Belarus may have come to an end.

“There is no more path to escape. By God, Minsk’s route has ended. What are the new roads?” one person posted on a social media platform used by migrants to inquire about getting into Europe.