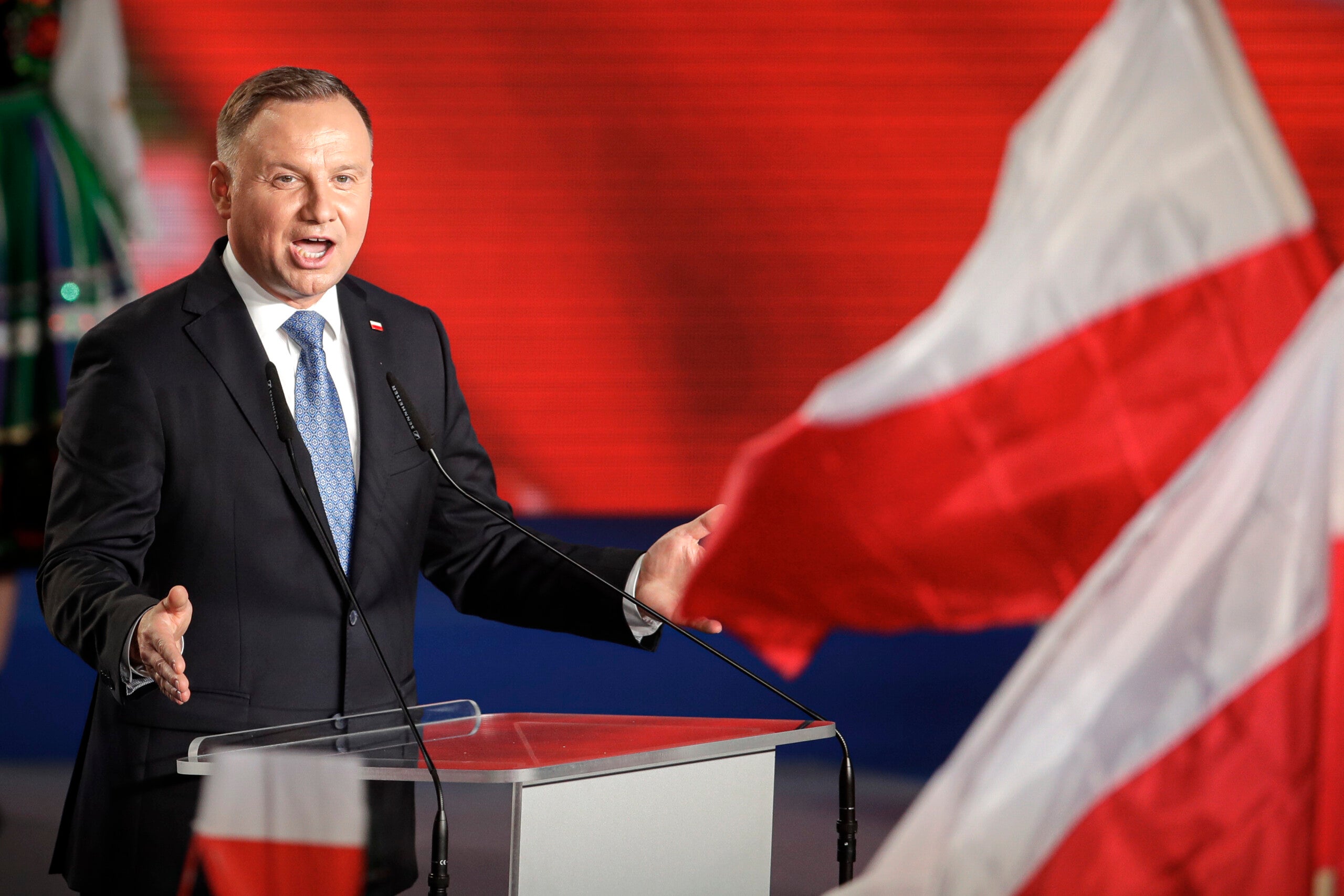 FILE - In this Sunday, June 28, 2020 file photo, President Andrzej Duda addressees supporters after voting ended in the presidential election in Lowicz, Poland. A Polish writer is being threatened with up to three years of imprisonment for calling the nation's president a “moron” on social media. The writer, Jakub Zulczyk, had criticized the manner in which Polish President Andrzej Duda — a close ally of former President Donald Trump — had reacted to the electoral victory of President Joe Biden last year. (AP Photo/Petr David Josek, File)
by: VANESSA GERA Associated Press
Posted: Mar 23, 2021 / 08:14 AM EST / Updated: Mar 23, 2021 / 08:14 AM EST

WARSAW, Poland (AP) — A Polish writer is facing up to three years in prison for calling the nation’s president a “moron” on social media.

Jakub Zulczyk had criticized the manner in which Polish President Andrzej Duda — a close ally of former President Donald Trump — had reacted to the electoral victory of President Joe Biden last year.

Zulczyk wrote on Facebook on Monday that a district prosecutor in Warsaw had filed an indictment against him based on an article in the penal code that makes it a crime to insult the head of state.

Zulczyk said he believed that he is probably “the first writer in this country in a long time to be tried for what they wrote.”

People have also been charged in the past for insulting previous Polish presidents in the post-communist era under the country’s broad insult laws. Fines or fines or community service — and not years in prison — are seen as the most likely punishment.

However, the case also comes amid what many see as an erosion of democratic standards in Poland since a right-wing populist party, Law and Justice, won power in 2015. Government critics accuse the authorities of aggressively harnessing prosecutorial powers to promote those in power.

The comment in question concerns a critical response by Zulczyk to a congratulatory tweet by Duda after U.S. media called the election for Biden on Nov. 7.

Duda offered his congratulations to Biden “for a successful presidential campaign. As we await the nomination by the Electoral College, Poland is determined to upkeep high-level and high-quality PL-US strategic partnership for an even stronger alliance.”

At the time of Duda’s tweet, many other European leaders were offering full-fledged congratulations to Biden. At home, Duda was criticized by many for suggesting that Biden’s victory was somehow not definitive and that the Electoral College could still somehow change the result.

That same day, Zulczyk wrote on Facebook that as someone with a master’s degree in American studies, he had never heard of a “nomination by the Electoral College” in the U.S. system. He said the Democratic candidate had clearly won the election.

“Joe Biden is the 46th president of the United States. Andrzej Duda is a moron,” he wrote.

Prosecutors made their indictment based on the complaint of a private individual, and it was unclear if Duda had been informed about it.