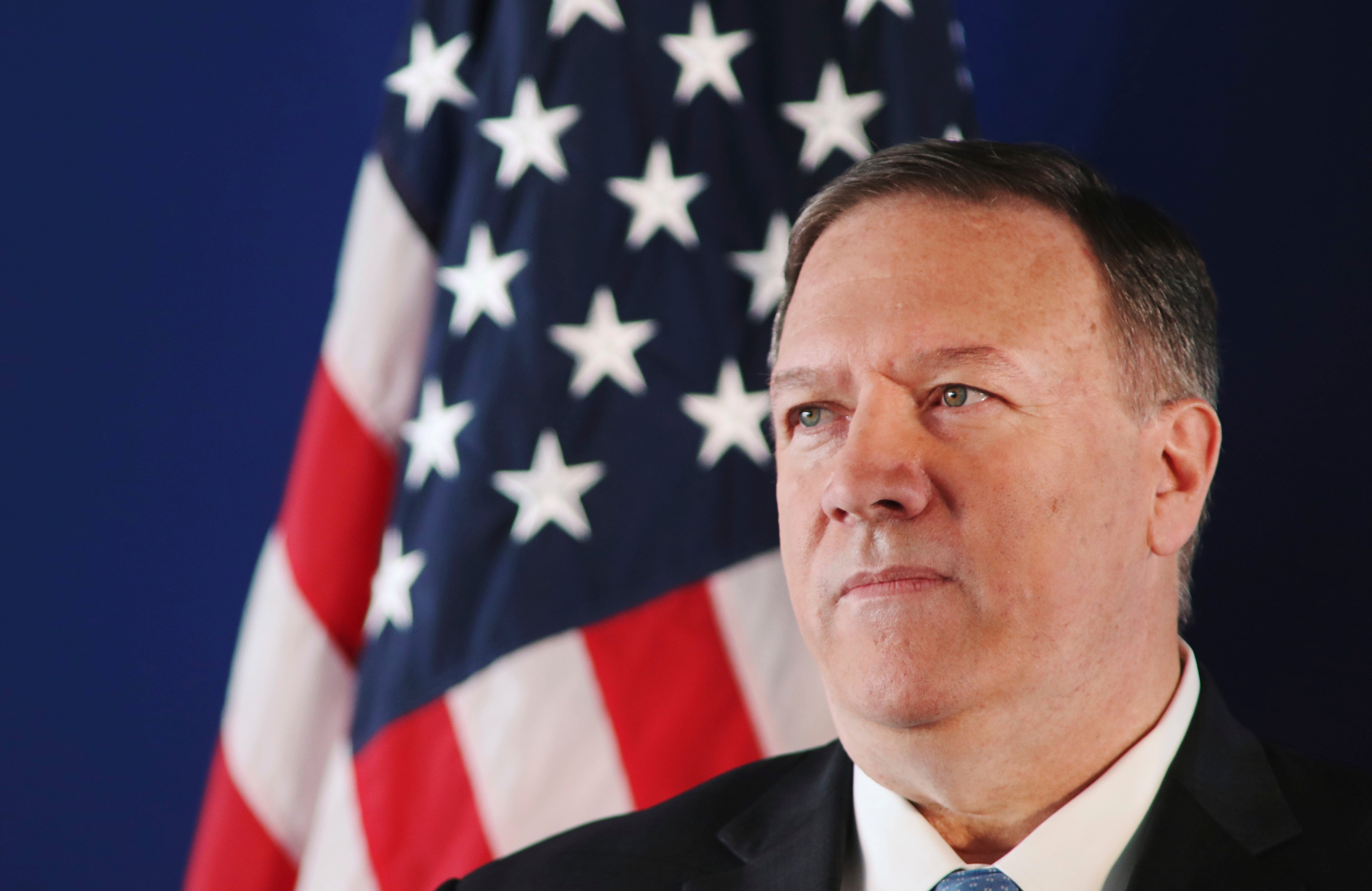 U.S. Secretary of State Mike Pompeo delivers a speech at the Stavros Niarchos Foundation Cultural Center in Athens, Saturday, Oct. 5, 2019. Pompeo is in Greece on the last leg of a four-nation European tour that has been overshadowed by the impeachment inquiry in Washington. Pompeo has sought to avoid the drama back home by focusing on matters directly related to his trip. (Costas Baltas/Pool via AP)
by: MATTHEW LEE AP Diplomatic Writer
Posted: Jan 31, 2020 / 04:59 AM EST / Updated: Jan 31, 2020 / 04:59 AM EST

KYIV, Ukraine (AP) — U.S. Secretary of State Mike Pompeo opened a visit to Ukraine on Friday facing a delicate balancing act as he tries to boost ties with a critical ally at the heart of the impeachment trial while not providing fodder for Democrats seeking to oust President Donald Trump.

The highest-ranking American official to visit Ukraine since the impeachment process began last year, Pompeo’s meeting with Ukraine’s president and other top officials. Trump is alleged to have pressed them to open a corruption probe into former Vice President Joe Biden’s family in return for vital military aid and a White House visit.

That process began last year with revelations about a July 25 phone call between Trump and President Volodymyr Zelenskiy.

Pompeo’s meetings in Kyiv come as the GOP-majority Senate prepared to vote on whether to hear witnesses who could shed further light on Trump’s actions toward Ukraine. The vote appeared likely to fail, however, as a key Republican said he would vote against allowing new testimony, boosting odds the Senate will vote to acquit in a matter of days.

“U.S. support for Ukraine is unwavering, and I’m intent on underscoring this as I meet with Ukrainian government leaders to discuss ways we can advance our strategic partnership and reinforce Ukraine’s position as a free and democratic state,” Pompeo said in a tweet after arriving,

Trump is accused of obstructing Congress and abuse of office for withholding a White House meeting with Zelenskiy and critical military aid to the country in exchange for an investigation into Biden, a political rival, and his son, Hunter.

Ukraine has been an unwilling star in the impeachment proceedings, eager for good relations with Trump as it depends heavily on U.S. support to defend itself from Russian-backed separatists. Trump, who has still not granted Zelenskiy the White House meeting he craves, has offered that support to some degree. Although the military assistance was put on hold, it was eventually released after a whistleblower complaint brought the July 25 call to light. The Trump administration has also supplied Ukraine with lethal defense equipment, including Javelin anti-tank weapons.

Pompeo plans to stress the importance of the U.S.-Ukraine relationship, a sentiment long shared by Republicans and Democrats who see the former Soviet republic as a bulwark against Russian ambitions. But it’s a view that now has partisan overtones, with Democrats arguing that withholding aid from such a critical ally for political purposes is an impeachable offense.

The Senate is to vote on hearing impeachment witnesses later Friday. Democrats want to hear from former national security adviser John Bolton, whose forthcoming book reportedly says that Trump withheld the aid in exchange for a public pledge of a probe into the Bidens. That would back witnesses who testified before the House impeachment inquiry.

Ukraine has been a delicate subject for Pompeo, who last weekend lashed out at a National Public Radio reporter for asking why he has not publicly defended the former U.S. ambassador to Ukraine, Marie Yovanovitch. She was removed from her post after unsubstantiated allegations were made against her by Trump’s personal attorney, Rudolph Giuliani.

Pompeo has been criticized for not publicly supporting Yovanovitch, her now-departed successor as chief of the Kyiv embassy, William Taylor, and other diplomats who testified before House impeachment investigators. Yovanovitch and Taylor have been attacked by Trump supporters and, in some cases, have been accused of disloyalty.

In the NPR interview, Pompeo took umbrage when asked if he owed Yovanovitch an apology, and maintained that he had defended all of his employees. In an angry encounter after the interview, he also questioned if Americans actually cared about Ukraine, according to NPR.

That comment prompted Taylor and Pompeo’s former special envoy for Ukraine, Kurt Volker, who also testified to the impeachment panel, to write opinion pieces discussing the importance of the country to U.S. national security and why Pompeo should be explaining its role to Americans as their top diplomat.

Pompeo brushed aside his reported comment, telling reporters aboard his plane that “of course, the American people care about the people of Ukraine” and said his message to American diplomats in Ukraine would be the same he gives to those at other embassies.

He said he would “talk about the important work that the United States and Ukraine will continue to do together to fight corruption inside of that country and to ensure that America provides the support that the Ukrainian people need to ensure that they have a free and independent nation.”

Pompeo twice postponed earlier planned trips to Ukraine, most recently in early January when developments with Iran forced him to cancel. Pompeo said he plans to discuss the issue of corruption but demurred when asked if he would specifically raise the Bidens or the energy company Burisma, for which Hunter Biden worked.

“I don’t want to talk about particular individuals. It’s not worth it,” he told reporters. “It’s a long list in Ukraine of corrupt individuals and a long history there. And President Zelenskiy has told us he’s committed to it. The actions he’s taken so far demonstrate that, and I look forward to having a conversation about that with him as well.”

Pompeo traveled to Kyiv from London, which was the first stop on a trip to Europe and Central Asia that will also take him to Belarus, Kazakhstan and Uzbekistan.