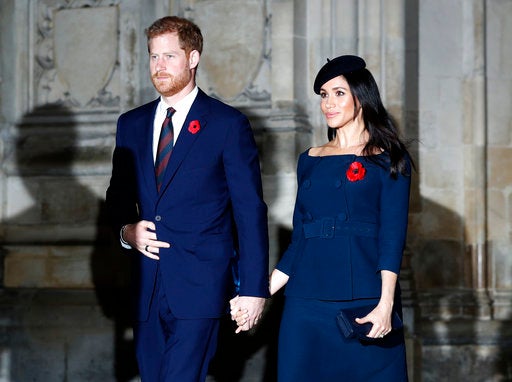 Prince Harry and Meghan, Duchess of Sussex leave Westminster Abbey after attending the Remembrance Sunday ceremony at Westminster Abbey in London, Sunday, Nov. 11, 2018. Remembrance Sunday is held each year to commemorate the service men and women who fought in past military conflicts. 2018 marks the centenary of the armistice and cessation of hostilities in WWI, which ended on the eleventh hour of the eleventh day of the eleventh month. (AP Photo/Alastair Grant)
by: Aleesha Khaliq, CNN
Posted: Jul 2, 2020 / 12:48 PM EST / Updated: Jul 2, 2020 / 12:49 PM EST

(CNN) — Prince Harry has said that institutional racism is “endemic” in society and apologized that not enough has been done to combat it.

In a virtual message during the 2020 Diana Awards ceremony Wednesday, the Duke of Sussex honored those who were working to tackle some of the world’s biggest issues, including racial inequality, climate change and mental health.

Speaking about his mother, Harry said: “She never took the easy route, or the popular one, or the comfortable one, but she stood for something, and she stood up for people who needed it.”

He added: “Right now, we are seeing situations around the world where division, isolation and anger are dominating. As pain and trauma come to the surface.”

The prince said he and his wife, Meghan, agree that their generation and the one before them have not done enough to “right the wrongs of the past.”

“I, too, am sorry. Sorry that we haven’t got the world to the place that you deserve it to be,” he added.

“Institutional racism has no place in our societies, yet it is still endemic. Unconscious bias must be acknowledged without blame to create a better world for all of you,” he said, adding that he was committed to being part of the solution.

His words come after Meghan delivered an impassioned speech to her former high school in June following the death of George Floyd and subsequent Black Lives Matter protests which swept the globe.

Earlier this year, the Duke and Duchess of Sussex announced they were stepping down from their roles as senior members of the royal family.

The couple said that they were working towards becoming “financially independent” and dropped their titles “His Royal Highness” and “Her Royal Highness,” resulting in them no longer representing the Queen.