Protest in Yangon ahead of regional summit on Myanmar crisis 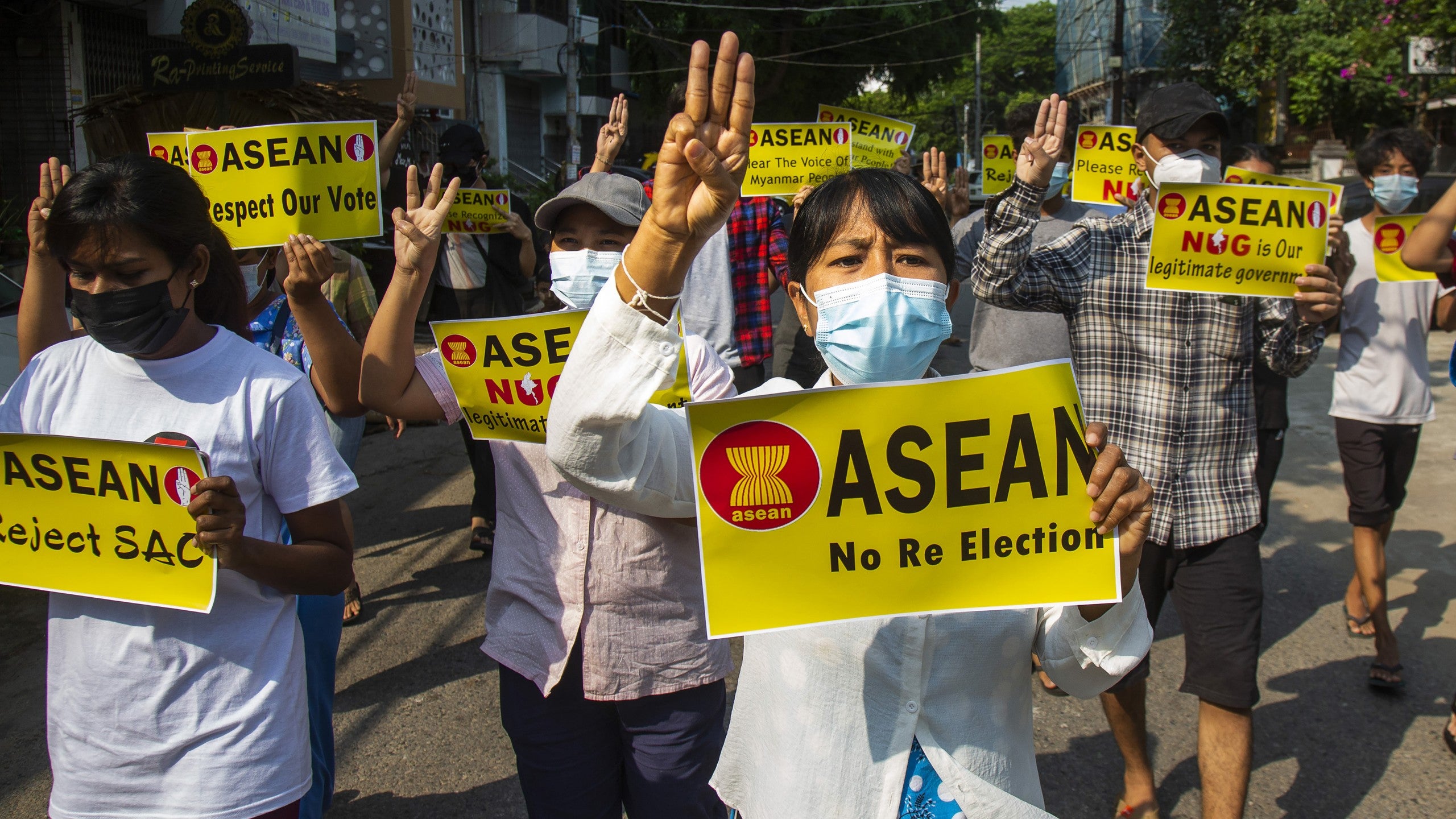 Anti-coup protesters flash the three-finger sign of defiance during a demonstration against the military coup in Yangon, Myanmar, on April 23, 2021. Leaders of the 10-member Association of Southeast Asian Nations will meet April 24 in Jakarta to consider plans to promote a peaceful resolution of the conflict that has wracked Myanmar since its military launched a deadly crackdown on opponents to its seizure of power in February. (AP Photo)
by: Associated Press
Posted: Apr 23, 2021 / 04:36 PM EST / Updated: Apr 23, 2021 / 04:37 PM EST

YANGON, Myanmar (AP) — Protesters against Myanmar’s military coup returned Friday to the streets of downtown Yangon, defiantly chanting their opposition to the army’s seizure of power as the junta chief prepared to attend a meeting of Southeast Asian leaders on the country’s crisis.

Such open demonstrations in the center of Myanmar’s largest city all but stopped weeks ago, as the deadly crackdown on dissent by the security forces made it too dangerous. Yangon is where the first major demonstrations were held against the February coup that ousted the elected government of Aung San Suu Kyi.

The protests launched a nationwide Civil Disobedience Movement that even the use of lethal force has failed to cow. Daily crackdowns by police and soldiers have killed more than 700 protesters and bystanders nationwide, according to several independent tallies.

About 150 protesters marched down the wide boulevards of Yangon’s Pabedan neighborhood with their hands raised in the three-fingered salute adopted by the opponents of military rule.

“Let’s roar till the whole city can hear out voices!” the group’s leader shouted.

They quickly scattered when police vehicles appeared nearby.

Leaders of the 10-member Association of Southeast Asian Nations will discuss the Myanmar crisis on Saturday in Indonesia’s capital, Jakarta, with coup leader Senior Gen. Min Aung Hlaing set to attend in person.

The invitation to the junta chief has angered the coup’s opponents, including a parallel National Unity Government created by ousted elected lawmakers, who argue his attendance legitimizes his power grab. The NUG was not invited to take part.

The ASEAN leaders may seek to stop the security forces’ violent suppression of the protests. They may also suggest an ASEAN-led humanitarian mission and a roadmap to dialogue between Myanmar’s military rulers and their opponents.

There were other protests around Myanmar on Friday, including in Launglone township in southern Myanmar, where demonstrators came out in force to show their support for the National Unity Government.

BANGKOK (AP) — When the 10-member Association of Southeast Asian Nations holds a special summit Saturday to discuss Myanmar, the regional body will be under as much scrutiny as the general who led the February coup ousting the elected government of Aung San Suu Kyi.

Opponents of the junta are furious that ASEAN is welcoming its chief, Senior Gen. Min Aung Hlaing, to its meeting in the Indonesian capital of Jakarta, arguing that because he seized power by force, he is not Myanmar’s legitimate leader. Also weighing heavily against him is the lethal violence perpetrated by the security forces he commands, responsible for killing hundreds of largely peaceful protesters and bystanders.

“Min Aung Hlaing, who faces international sanctions for his role in military atrocities and the brutal crackdown on pro-democracy protesters, should not be welcomed at an intergovernmental gathering to address a crisis he created,” said Brad Adams, Asia director for New York-based Human Rights Watch.

“ASEAN members should instead take this opportunity to impose targeted, economic sanctions on junta leaders and on businesses that fund the junta, and press the junta to release political detainees, end abuses, and restore the country’s democratically elected government.”

The junta’s foes have promoted the idea that the opposition’s parallel National Unity Government, recently established by the elected lawmakers the army barred from being seated, should represent Myanmar, or at least have some role in the Jakarta meeting. It has not been invited.

“It’s unacceptable that they invite this murderer-in-chief, Min Aung Hlaing, who has just killed more than 730 people in Myanmar, and I think it is very unfortunate that they, again and again, talk to the military generals and not to the civilian government of Myanmar, which is the NUG,” says the parallel government’s Minister of International Cooperation, Dr. Sasa, who uses one name.

Evan Laksmana, a researcher for Indonesia’s Centre for Strategic and International Studies, a think tank with close government ties, told The Associated Press there is a very practical reason for engaging Min Aung Hlaing face to face.

ASEAN recognizes “the reality is that one party is doing the violence, which is the military, and therefore that’s why the military is being called to the meeting. So this is not in any way conferring legitimacy to the military regime,” he said.

By talking to the general, ASEAN hopes to initiate a longer-term process, starting with ending the violence, that will “hopefully help facilitate dialogue among all the stakeholders in Myanmar, not just (with) the military regime.”

Indonesian Foreign Minister Retno Marsudi said at a news conference Friday that her country hopes the ASEAN leaders will reach an agreement that is good for the people of Myanmar.

But skeptics feel ASEAN faces basic problems in seeking to resolve Myanmar’s crisis. They point to the divergent interests of the group’s members, its longstanding conventions of seeking consensus and avoiding interference in each other’s affairs, and the historic obstinacy of Myanmar’s generals.

One faction in the group, comprising Indonesia, Malaysia and Singapore, believes the instability engendered by the coup threatens the entire region as well as ASEAN’s credibility as a group powerful enough to act independently of big power influence.

They also point out that the ASEAN Charter — adopted in 2007, 40 years after the group’s founding — includes democracy, human rights, good governance and rule of law as guiding principles.

“Now is a grave time for ASEAN’s much-touted centrality, the idea that ASEAN is a central regional platform for regional dialogue, for promoting peace and stability in the region,” said Prof. Thitinan Pongsudhirak, director of the Institute of Security and International Studies at Bangkok’s Chulalongkorn University. He said that conception of ASEAN is now facing “its most severe, grave challenge” in 53 years of existence.

Member countries with more authoritarian regimes — Laos, Cambodia and Vietnam — see little benefit in paying more than lip service to such principles, and have treated Myanmar’s crisis as its own internal matter.

The Jakarta meeting is a hybrid one, with onsite attendance encouraged but virtual participation by video an option because of the coronavirus pandemic. Thai Prime Minister Prayuth Chan-ocha and Philippine President Rodrigo Duterte both announced they will stay home and send their foreign ministers in their stead, but they are dealing with serious COVID-19 outbreaks, obscuring any political message in their decisions.

“It is more difficult to communicate on a personal level between the leaders without the leaders being present fully, particularly with regards to the prime minister of Thailand, whom we believe to have the best relationship with the current senior general from Myanmar,” observed Indonesia’s Laksmana.

He believes ASEAN has a unique opportunity to engage productively with Myanmar’s ruling junta “because right now there is no other option on the table.”

“We haven’t seen any progress from the U.N. Security Council, for example. There is no collective effort by other countries. This is it. This is the first potential breakthrough for the current crisis,” he told The Associated Press.

U.N. specialized agencies and experts have been active in criticizing the coup and the junta’s crackdown. U.N. Special Envoy on Myanmar Christine Schraner Burgener will not take part in ASEAN’s deliberations, but intends to take part in sideline consultations. The junta has rejected her repeated requests to visit Myanmar.

The Security Council could effectively coordinate actions such as arms embargoes to pressure the junta, but Russia and China, major weapons suppliers to the junta, would veto such moves.

Western nations have already enacted targeted sanctions against members of the junta and businesses giving them financial support, but Myanmar’s past military governments have successfully stood up to such pressures, and would be expected to do so again, especially with support from Beijing.

ASEAN prefers quiet diplomacy to intimidation, seeking incremental gains. Even getting the two Myanmar sides to talk to each other could take some time, acknowledges Laksmana.

“I think the gravity of the situation on the ground is as such now that there is no space or even willingness for dialogue until we end the violence,” he said.

“So I think the first steps would be to what extent can ASEAN facilitate the observance of a humanitarian pause first and then the delivery of the humanitarian aid,” he said. Only after that might a forum be possible where all the stakeholders could talk.

A Southeast Asian diplomat, speaking on condition of anonymity because he is not authorized to speak to the media, said another opening move is under consideration. This would involve having ASEAN’s current chairman, Brunei Prime Minister Hassanal Bolkiah, travel to Myanmar for meetings with the military leadership and Suu Kyi’s camp to encourage dialogue. He would go there with ASEAN Secretary General Lim Jock Hoi — also from Brunei — if the junta gives them the nod.

ASEAN-style diplomacy with Myanmar has borne fruit in the past. The military regime in charge in 2008 was incapable of mounting sufficient rescue and recovery efforts in the wake of devastating Cyclone Nargis, but refused to open up the country to an international aid effort. ASEAN took the initiative in offering to open a channel for foreign assistance, and the much-needed aid started flowing.