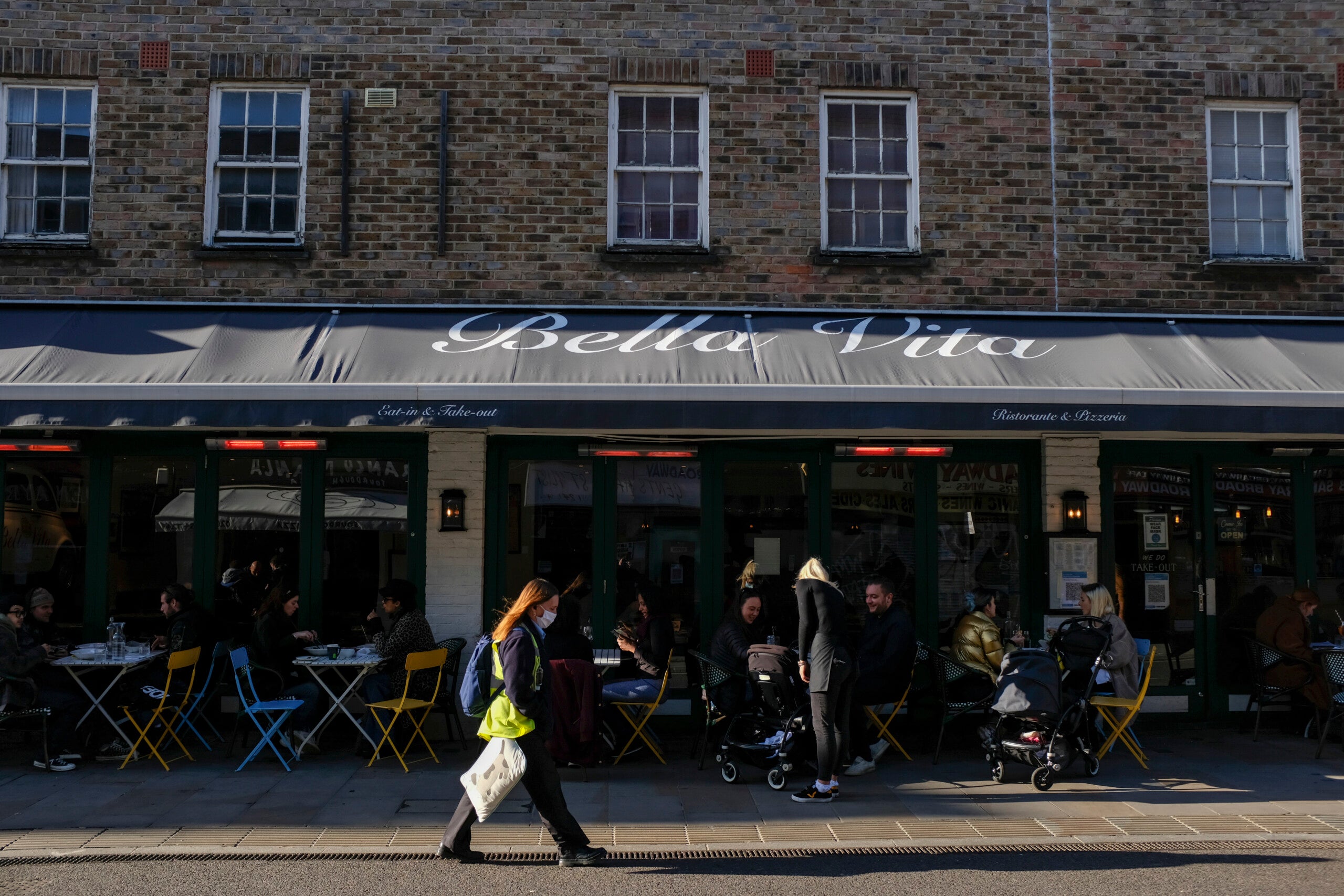 People sit to eat and drink at a restaurant in Broadway Market, London, Wednesday, Nov. 4, 2020, as Britain prepares to join large swathes of Europe in a coronavirus lockdown designed to save its health care system from being overwhelmed. Pubs, along with restaurants, hairdressers and shops selling non-essential items will have to close Thursday until at least Dec. 2. (AP Photo/Alberto Pezzali)
by: By PAN PYLAS Associated Press
Posted: Nov 4, 2020 / 01:53 PM EST / Updated: Nov 4, 2020 / 01:53 PM EST

LONDON (AP) — Last-minute shoppers in England came out in force Wednesday and thirsty drinkers planned their final freshly poured pints in a pub for the next month as Britain prepared to join large swaths of Europe in a coronavirus lockdown designed to save its health care system from being overwhelmed.

All non-essential venues — which in England includes pubs, restaurants, hairdressers, golf courses, gyms, swimming pools, entertainment places and stores selling items like books, clothing and sneakers — must close Thursday until at least Dec. 2. That order came after a sudden change of course last weekend by Britain’s government, which had for weeks been advocating a targeted regional response to the pandemic instead of another national lockdown.

Two changes from the U.K.’s spring lockdown is that this time schools and universities in England are remaining open, as are construction sites and factories.

With time running out to get things sorted out before the lockdown takes effect, all types of businesses extended their hours and reported brisk customer traffic, sometimes on an unprecedented scale.

London hairdresser Richard Ward said his team of around 100 will have worked through 1,400 customers in the three working days since the British government announced the England-wide lockdown, but weekly business was still down around 25% on an annual basis as a result of coronavirus restrictions already in place.

Fears about a devastating economic impact of the monthlong shutdown prompted some lawmakers from Prime Minister Boris Johnson’s Conservative Party to vote against approving the lockdown in Parliament on Wednesday. Still, Johnson easily won the vote as most opposition lawmakers backed the move.

England’s lockdown follows similar restrictions elsewhere in the U.K., which recorded another 492 COVID-19 deaths on Wednesday, the highest daily number since May. Overall, the U.K. has Europe’s highest official virus-related death toll: 47,742.

It also follows fresh restrictions across the continent amid evidence that the number of people hospitalized with COVID-19 — and subsequently dying — is increasing,

The World Health Organization said European countries recorded a 46% increase in virus deaths compared with the previous week and were responsible for about half the 1.7 million cases reported around the world last week.

In recent days, many European nations — including Belgium, Russia, France, Italy, Poland, Slovenia and the U.K. — have reported their highest daily virus death tolls in months, and sometimes ever. The pandemic has already caused more than 1.2 million confirmed deaths — over 270,000 of them in Europe, according to a tally by Johns Hopkins University. Experts say the true toll, due to missed cases and limited testing, is much higher.

Italy, which suffered badly during the first wave of the pandemic, is facing new curbs on freedom of movement from Thursday, including a nationwide overnight curfew and high schools placed on full-time distance learning.

The country is expected to be carved up into three zones of contagion with corresponding restrictions on movement, commercial activities and school openings. Travel restrictions will prohibit anyone from entering or leaving a hard-hit region and restaurants and shops will close, except for supermarkets and pharmacies.

The northern region of Lombardy, which bore the brunt of the pandemic earlier this year, is reeling under another surge, especially in its financial capital, Milan, and is expected to face harsher restrictions.

Earlier restrictions appeared, in some locations, to be producing results.

Belgium said Wednesday that new infections and hospital admissions have started to stabilize after measures like closing pubs and restaurants were introduced weeks ago.

Van Gucht said it was important that people don’t let their guard down in a country that has been recording around 1,750 cases per 100,000 people, triple the rates in Italy, Spain or the U.K.

“Let there be no doubt that the tough rules need to be maintained,” he said.

In the Netherlands, Prime Minister Mark Rutte said there were signs that closing bars and restaurants was working but that further curbs were needed. Beginning Wednesday night, Dutch cinemas, theaters, museums and pools will be closed.

“It’s not going too bad but certainly not good enough,” Rutte told the country. “The infection numbers have to go down quicker.”

Pope Francis also urged people to be “very attentive” to the measures to prevent coronavirus infections as he switched his weekly general audience Wednesday back to his private library and livestreamed the event. The move seeks to better protect the 83-year-old pope after someone at a recent public audience tested positive.

Not all countries are going down the lockdown route. Russia has shunned a second lockdown, insisting that its health care system is able to cope with the recent surge. Still, Russia on Wednesday reported 19,768 new infections and 389 new deaths — both records.