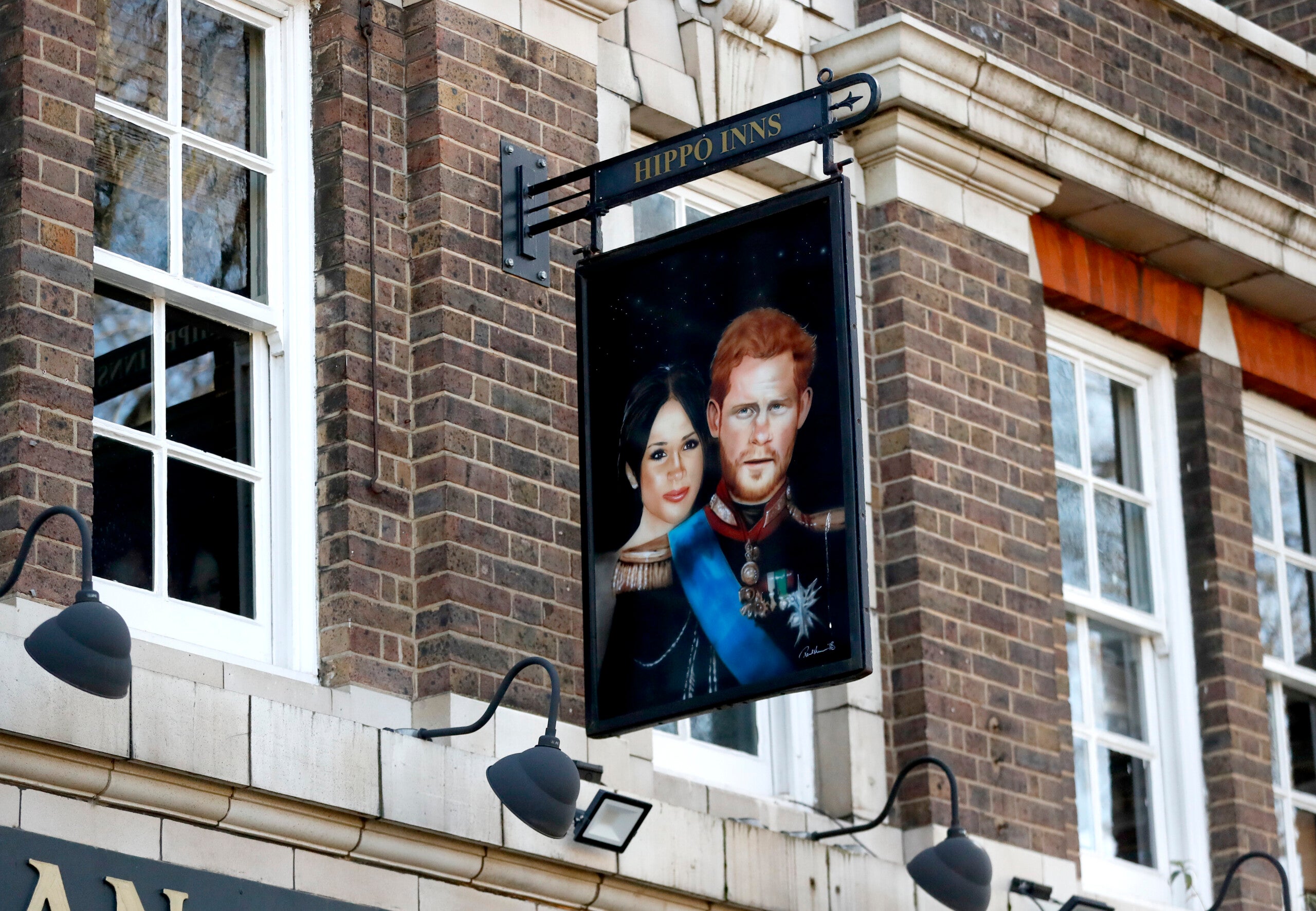 A sign depicting the image of Britain's Prince Harry and his wife Meghan, hangs outside the Duke of Sussex pub near Waterloo station, London, Tuesday March 9, 2021. Prince Harry and Meghan's explosive TV interview has divided people around the world, rocking an institution that is struggling to modernize with claims of racism and callousness toward a woman struggling with suicidal thoughts. (AP Photo/Frank Augstein)
by: DANICA KIRKA Associated Press
Posted: Mar 9, 2021 / 02:17 PM EST / Updated: Mar 9, 2021 / 02:17 PM EST

LONDON (AP) — Buckingham Palace said Tuesday that allegations of racism made earlier this week by Prince Harry and Meghan were “concerning” and would be addressed privately by the royal family.

The comments, made in a statement issued on behalf Queen Elizabeth II, are the first from the palace since a two-hour TV interview by Harry and Meghan rocked the royal family. Meghan, who is biracial, said the palace had failed to help her when she had suicidal thoughts and that an unidentified member of the royal family had raised “concerns” about the color of her baby’s skin when she was pregnant with her son, Archie.

“The whole family is saddened to learn the full extent of how challenging the last few years have been for Harry and Meghan,” the palace said. “The issues raised, particularly that of race, are concerning. While some recollections may vary, they are taken very seriously and will be addressed by the family privately.’’

The interview, which aired Sunday night in the U.S. and a day later in Britain, has divided people around the world. While many say the allegations demonstrate the need for change inside a palace that hasn’t kept pace with the #MeToo and Black Lives Matter movements, others have criticized Harry and Meghan for dropping their bombshell while Harry’s 99-year-old grandfather, Prince Philip, remains hospitalized in London after a heart procedure.

While the palace often tries to stay above controversy by remaining silent and riding out the storm, the Duke and Duchess of Sussex’s charges proved so damaging that the family was forced to respond.

The response was likely delayed by the queen’s struggle to balance her sometimes-conflicting roles as monarch and grandmother, said Angela Levin, author of “Harry, a Biography of a Prince.” Yet she said there’s little doubt that ultimately the 94-year-old monarch will make her decision based on what’s best for the 1,000-year-old institution she has led since 1952.

“Harry, Meghan and Archie will always be much loved family members,’’ the statement said.

During the interview, Meghan described feeling so isolated and miserable inside the royal family that she had suicidal thoughts, yet when she asked for mental health help from the palace’s human resources staff she was told she was not a paid employee. She also said a member of the royal family had expressed “concerns” to Harry about the color of her unborn child’s skin.

Winfrey later said Harry told her off camera that the family member wasn’t Queen Elizabeth II or Prince Philip, sparking a flurry of speculation about who it could be.

Harry also revealed the stresses the couple endured had ruptured relations with his father, Prince Charles, heir to the British throne, and his brother, Prince William, illuminating the depth of the family divisions that led the couple to step away from royal duties and move to California last year.

Prince Charles didn’t comment on the interview Tuesday during a visit to a vaccine clinic in London.

Harry’s father visited a church to see a temporary vaccine clinic in action and met with health care workers, church staff and people due to receive their vaccine jab. The visit was his first public appearance since the interview aired in the U.S. on Sunday night.

Maziya Marzook, a patient at the event, said “private matters didn’t come up at all” during Charles’ visit.

“He didn’t bring up anything,″ Marzook said. “He was more interested in how the vaccine was and how we feel.”

Sylvia Hui contributed to this report.

Follow all stories on Prince Harry and Meghan’s interview at https://apnews.com/PrinceHarry