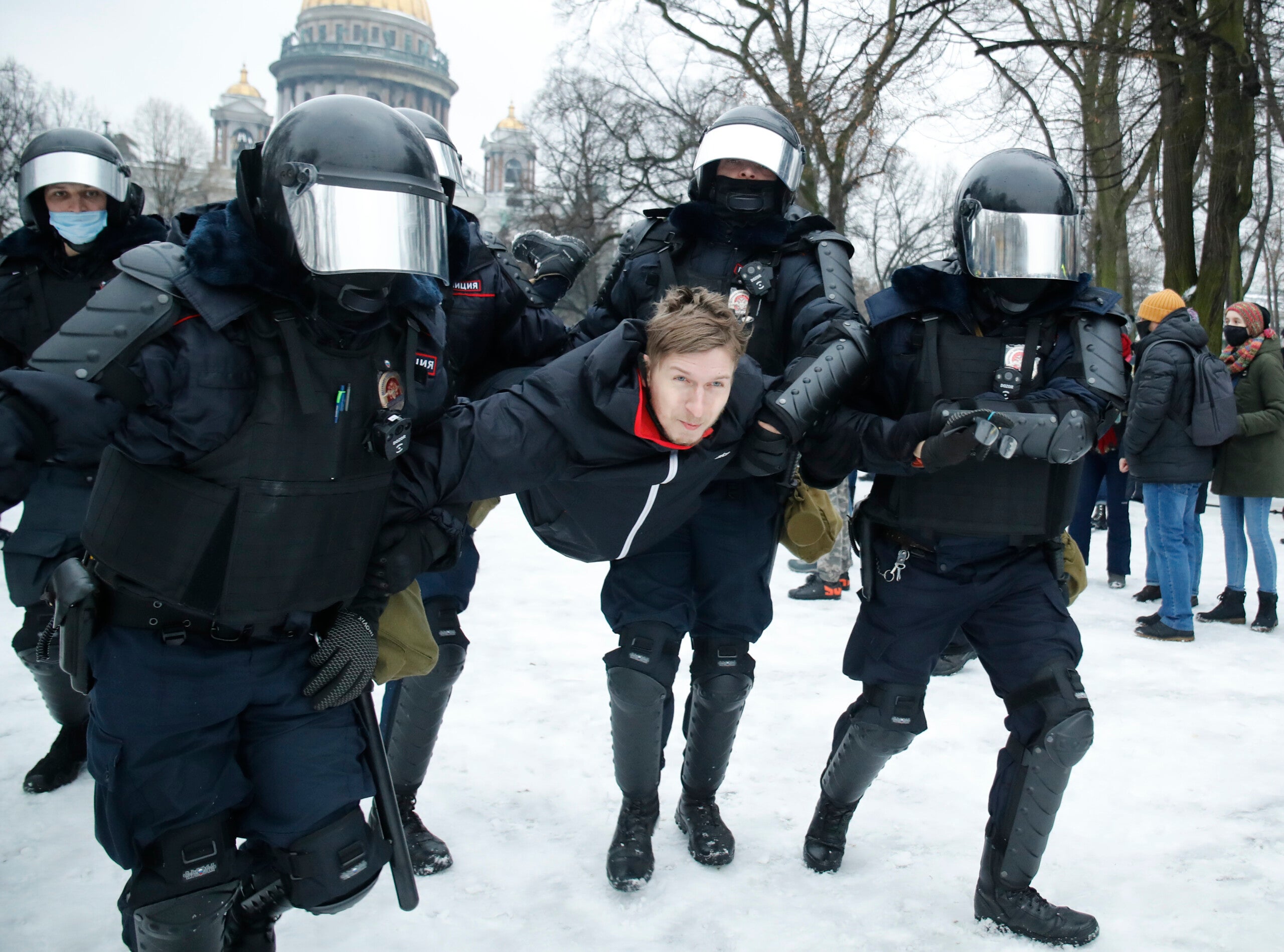 MOSCOW (AP) — Russian police arrested more than 2,600 people Saturday in nationwide protests demanding the release of opposition leader Alexei Navalny, the Kremlin’s most prominent foe, according to a group that counts political detentions.

The protests in scores of cities in temperatures as low as minus-50 C (minus-58 F) highlighted how Navalny has built influence far beyond the political and cultural centers of Moscow and St. Petersburg.

In Moscow, an estimated 15,000 demonstrators gathered in and around Pushkin Square in the city center, where clashes with police broke out and demonstrators were roughly dragged off by helmeted riot officers to police buses and detention trucks. Some were beaten with batons.

Navalny’s wife Yulia was among those arrested.

Police eventually pushed demonstrators out of the square. Thousands then regrouped along a wide boulevard about a kilometer (half-mile) away, many of them throwing snowballs at the police before dispersing.

Some later went to protest near the jail where Navalny is held. Police made an undetermined number of arrests there.

The protests stretched across Russia’s vast territory, from the island city of Yuzhno-Sakhalinsk north of Japan and the eastern Siberian city of Yakutsk, where temperatures plunged to minus-50 Celsius, to Russia’s more populous European cities. Navalny and his anti-corruption campaign have built an extensive network of support despite official government repression and being routinely ignored by state media.

“The situation is getting worse and worse, it’s total lawlessness,” said Andrei Gorkyov, a protester in Moscow. “And if we stay silent, it will go on forever.”

The OVD-Info group, which monitors political arrests, said at least 1,045 people were detained in Moscow and more than 375 at another large demonstration in St. Petersburg.

Overall, it said 2,662 people had been arrested in some 90 cities, revising the count downward from its earlier report of 3,445. The group, which conducts its count through regional associates and runs a hotline for information, did not give an explanation for its revision. Russian police did not provide arrest figures.

Navalny was arrested on Jan. 17 when he returned to Moscow from Germany, where he had spent five months recovering from a severe nerve-agent poisoning that he blames on the Kremlin and which Russian authorities deny. Authorities say his stay in Germany violated terms of a suspended sentence in a 2014 criminal conviction, while Navalny says the conviction was for made-up charges.

The 44-year-old activist is well known nationally for his reports on the corruption that has flourished under President Vladimir Putin’s government.

His wide support puts the Kremlin in a strategic bind — officials are apparently unwilling to back down by letting him go free, but keeping him in custody risks more protests and criticism from the West.

In a statement, the U.S. State Department condemned “the use of harsh tactics against protesters and journalists this weekend in cities throughout Russia” and called on Russian authorities to immediately release Navalny and all those detained at protests.

Navalny faces a court hearing in early February to determine whether his sentence in the criminal case for fraud and money-laundering — which Navalny says was politically motivated — is converted to 3 1/2 years behind bars.

Moscow police on Thursday arrested three top Navalny associates, two of whom were later jailed for periods of nine and 10 days.

Navalny fell into a coma while aboard a domestic flight from Siberia to Moscow on Aug. 20. He was transferred from a hospital in Siberia to a Berlin hospital two days later. Labs in Germany, France and Sweden, and tests by the Organization for the Prohibition of Chemical Weapons, established that he was exposed to the Soviet-era Novichok nerve agent.

Russian authorities insisted that the doctors who treated Navalny in Siberia before he was airlifted to Germany found no traces of poison and have challenged German officials to provide proof of his poisoning. Russia refused to open a full-fledged criminal inquiry, citing a lack of evidence that Navalny was poisoned.

Last month, Navalny released the recording of a phone call he said he made to a man he described as an alleged member of a group of officers of the Federal Security Service, or FSB, who purportedly poisoned him in August and then tried to cover it up. The FSB dismissed the recording as fake.

Navalny has been a thorn in the Kremlin’s side for a decade, unusually durable in an opposition movement often demoralized by repressions.

He has been jailed repeatedly in connection with protests and twice was convicted of financial misdeeds in cases that he said were politically motivated. He suffered significant eye damage when an assailant threw disinfectant into his face. He was taken from jail to a hospital in 2019 with an illness that authorities said was an allergic reaction but which many suspected was a poisoning.