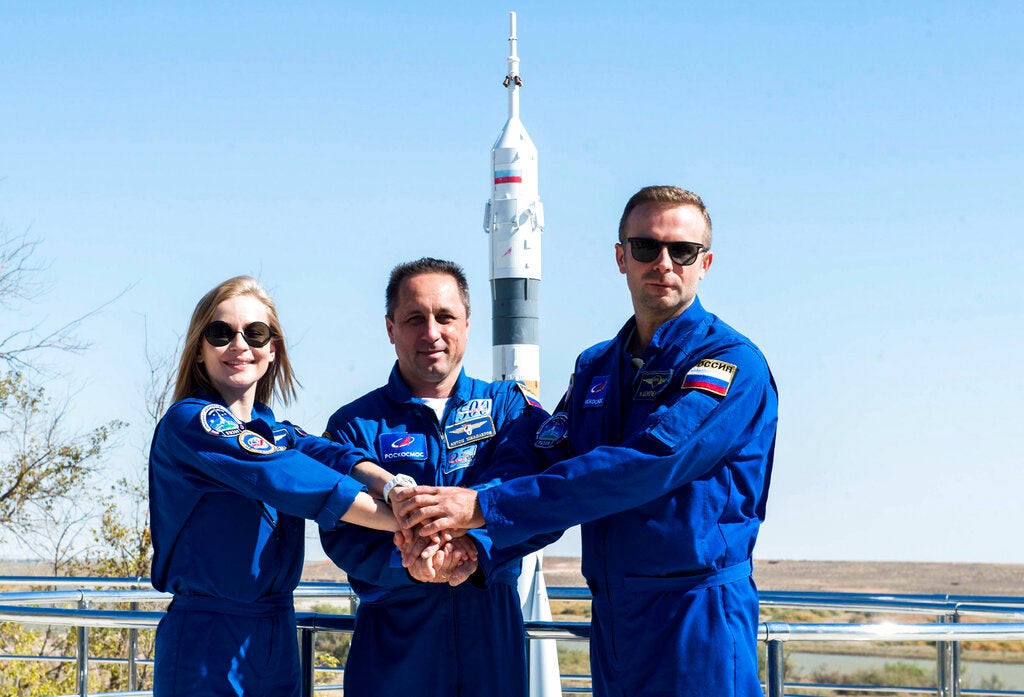 In this handout photo released by Roscosmos, Actress Yulia Peresild, left, director Klim Shipenko' right, and cosmonaut Anton Shkaplerov, members of the prime crew of Soyuz MS-19 spaceship pose at the Russian launch facility in the Baikonur Cosmodrome, Kazakhstan, Monday, Sept. 27, 2021. PIn a historic first, Russia is set to launch an actress and a film director to space to make a feature film in orbit. Actress Yulia Peresild and director Klim Shipenko are set to blast off Tuesday for the International Space Station in a Russian Soyuz spacecraft together with Anton Shkaplerov, a veteran of three space missions. (Andrey Shelepin, Roscosmos Space Agency via AP)
by: VLADIMIR ISACHENKOV Associated Press
Posted: Oct 5, 2021 / 05:36 AM EST / Updated: Oct 5, 2021 / 05:37 AM EST

MOSCOW (AP) — A Russian actor and a film director rocketed to space Tuesday on a mission to make the world’s first movie in orbit.

Actor Yulia Peresild and director Klim Shipenko blasted off for the International Space Station in a Russian Soyuz spacecraft together with cosmonaut Anton Shkaplerov, a veteran of three space missions. Their Soyuz MS-19 lifted off as scheduled at 1:55 p.m. (0855 GMT) from the Russian space launch facility in Baikonur, Kazakhstan and successfully reached the designated orbit.

Space officials reported that the crew was feeling fine and all spacecraft systems were functioning normally.

Peresild and Klimenko are to film segments of a new movie titled “Challenge,” in which a surgeon played by Peresild rushes to the space station to save a crew member who suffers a heart condition. After 12 days on the space outpost, they are set to return to Earth with another Russian cosmonaut.

Speaking at a pre-flight news conference Monday, 37-year-old Peresild acknowledged that it was challenging for her to adapt to the strict discipline and rigorous demands during the training.

“It was psychologically, physically and morally hard,” she said. “But I think that once we achieve the goal, all that will seem not so difficult and we will remember it with a smile.”

Shipenko, 38, who has made several commercially successful movies, also described their fast-track, four-month preparation for the flight as tough.

“Of course, we couldn’t make many things at the first try, and sometimes even at a third attempt, but it’s normal,” he said.

Shipenko, who will complete the shooting on Earth after filming space episodes, said that Shkaplerov and two other Russian cosmonauts on board the station will all play parts in the new movie.

Russia’s state-controlled Channel One television, which is involved in making the movie, has extensively covered the crew training and the launch.

“I’m in shock. I still can’t imagine that my mom is out there,” Peresild’s daughter, Anna, said in televised remarks minutes after the launch.

Dmitry Rogozin, head of the Russian state space corporation Roscosmos, was a key force behind the project, describing it as a chance to burnish the nation’s space glory and rejecting criticism from some Russian media.

Some commentators argued that the film project would distract the Russian crew and could be awkward to film on the Russian segment of the International Space Station, which is considerably less spacious compared to the U.S. segment. A new Russia lab module, the Nauka, was added in July, but it is yet to be fully integrated into the station.

Once they arrive at the space station just over three hours after the launch, the three newcomers will join Thomas Pesquet of the European Space Agency, NASA astronauts Mark Vande Hei, Shane Kimbrough and Megan McArthur, Roscosmos cosmonauts Oleg Novitskiy and Pyotr Dubrov and Aki Hoshide of the Japan Aerospace Exploration Agency.

Novitskiy, who is set to star as the ailing cosmonaut in the film, will take the captain’s seat in a Soyuz capsule to take the crew back to Earth on Oct. 17.