‘Stock up on blankets’: Ukrainians brace for horrific winter 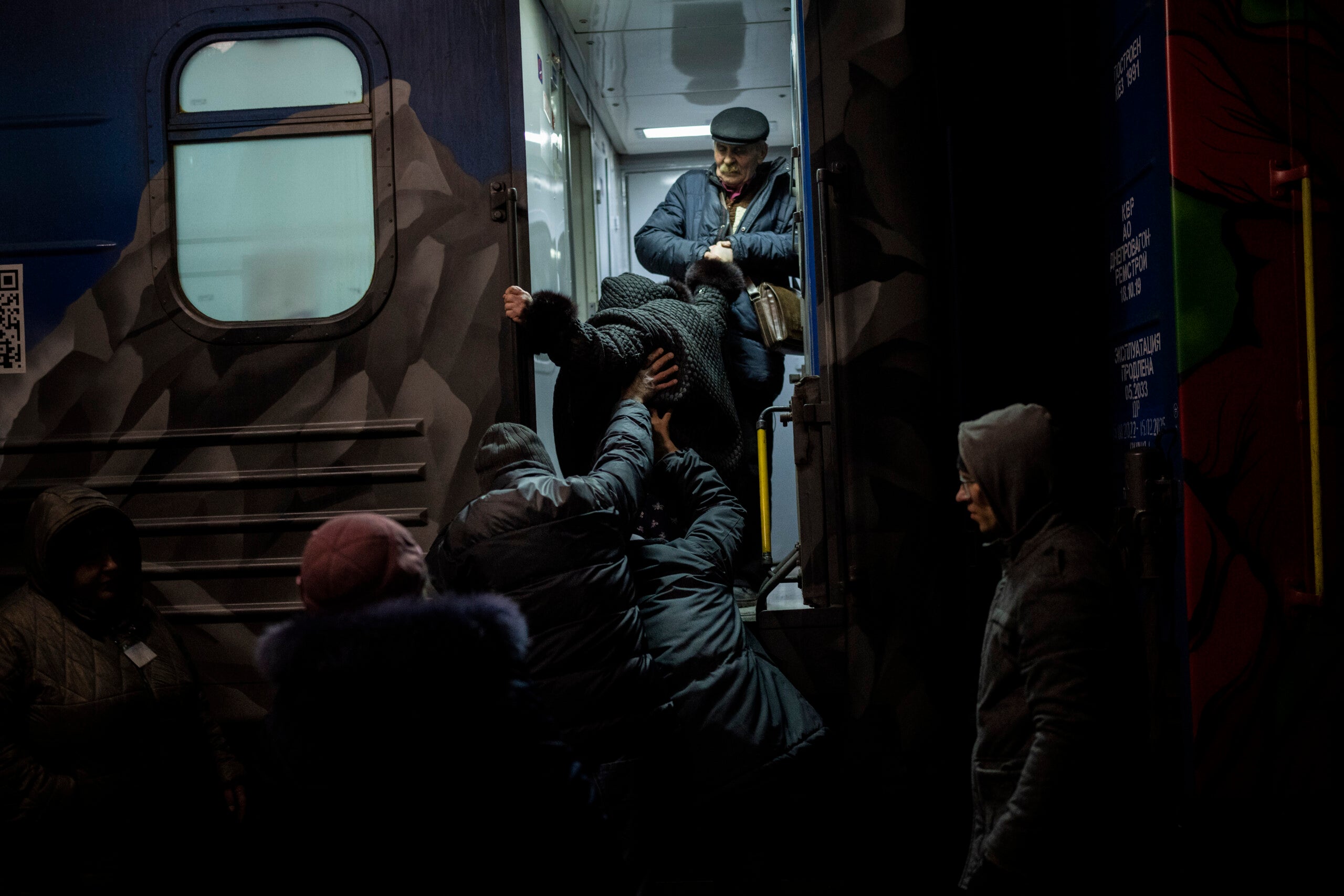 Ukrainians board the Kherson-Kyiv train at the Kherson railway station, southern Ukraine, Monday, Nov. 21, 2022. Ukrainian authorities are evacuating civilians from recently liberated sections of the Kherson and Mykolaiv regions, fearing that a lack of heat, power and water due to Russian shelling will make conditions too unlivable this winter. The move came as rolling blackouts on Monday plagued most of the country. (AP Photo/Bernat Armangue)
by: JOHN LEICESTER Associated Press
Posted: Nov 22, 2022 / 11:01 AM EST / Updated: Nov 22, 2022 / 11:01 AM EST

KYIV, Ukraine (AP) — Ukraine could face rolling blackouts across the country through March, an energy expert said, due to what another official described Tuesday as the “colossal” damage done to Ukraine’s power grid by relentless Russian airstrikes. Ukrainians are being told to stock up on supplies, evacuate hard-hit areas — or even think about leaving the country altogether.

Sergey Kovalenko, the CEO of private energy provider DTEK Yasno, said the company was under instructions from Ukraine’s state grid operator to resume emergency blackouts in the areas it covers, including the capital Kyiv and the eastern Dnipropetrovsk region.

“Although there are fewer blackouts now, I want everyone to understand: Most likely, Ukrainians will have to live with blackouts until at least the end of March,” Kovalenko warned in a Facebook post.

“I think we need to be prepared for different options, even the worst ones. Stock up on warm clothes, blankets, think about what will help you wait out a long shutdown,” he said, addressing Ukrainian residents.

Russia has been pummeling Ukraine’s power grid and other infrastructure from the air for weeks, as the war approaches its nine-month milestone. That onslaught has caused widespread blackouts and deprived millions of Ukrainians of electricity, heat and water.

“This winter will be life-threatening for millions of people in Ukraine,” said Dr. Hans Henri P. Kluge, the World Health Organization’s regional director for Europe, due to the lack of power and Ukraine’s damaged health facilities.

Temperatures commonly stay below freezing in Ukraine in the winter, and snow has already fallen in many areas, including Kyiv. Ukrainian authorities have started evacuating civilians from recently liberated sections of the southern Kherson and Mykolaiv regions out of fear that the winter will be too hard to survive.

Kovalenko said even if no more Russian airstrikes occur, scheduled outages will be needed across Ukraine to ensure that power is evenly distributed across the country’s battered energy grid.

“The scale of destruction is colossal” on the power grid from the Russian barrage last week, Volodymyr Kudrytskyi, the CEO of Ukrenergo, the state-owned power grid operator, told Ukrainian TV on Tuesday.

He said Ukraine has “practically no intact thermal (or) hydroelectric power plants” following the large-scale attack by Moscow on Nov. 15.

Also Tuesday, the Kyiv regional authorities said more than 150 settlements were enduring emergency blackouts due to the onset of winter weather, including snowfall and high winds. More than 70 repair teams have been deployed to restore power across the province.

The battle for terrain has continued unabated despite the deteriorating weather conditions, with Ukrainian forces pressing against Russian positions as part of a weeks-long counteroffensive and Moscow’s forces keeping up shelling and missile strikes.

In a key battlefield development, a Ukrainian official acknowledged that Kyiv’s forces are attacking Russian positions on the Kinburn Spit, which is a gateway to the Black Sea basin and parts of the southern Kherson region that are still under Russian control.

Natalia Humeniuk, a spokesperson for the Ukrainian army’s Operational Command South, said in televised remarks that Ukrainian forces are “continuing a military operation” in the area.

The Kinburn Spit is Russia’s last outpost in Ukraine’s southern Mykolayiv region, directly west of Kherson. Ukrainian forces recently liberated other parts of the Kherson and Mykolaiv regions. Moscow has used the Kinburn Spit as a staging ground for missile and artillery strikes on Ukrainian positions in the Mykolaiv province, and elsewhere along the Ukrainian-controlled Black Sea coast.

Ukraine recently recaptured the city of Kherson, on the western bank of the Dnieper River, and surrounding areas.

Recapturing the Kinburn Spit could help Ukrainian forces push into territory that Russia still holds in the Kherson region “under significantly less Russian artillery fire” than directly crossing the Dnieper, a Washington-based think tank said. The Institute for the Study of War added that control of the area would help Kyiv alleviate Russian strikes on Ukraine’s southern seaports and allow Ukraine to increase its naval activity in the Black Sea.

Meanwhile, Ukraine’s presidential office said Tuesday that at least eight civilians were killed and 16 were injured over the previous 24 hours, as Moscow’s forces once again used drones, rockets and heavy artillery to pound eight Ukrainian regions.

In the eastern Donetsk region, fierce battles continued around the city of Bakhmut, where the Kremlin’s forces are keen to clinch a victory after weeks of embarrassing military setbacks. Donetsk Governor Pavlo Kyrylenko also said Russia launched missiles at the city of Kramatorsk, a Ukrainian military hub, and on the strategic city of Avdiivka.

He added that power and communications were nonexistent in most of the Donetsk region.

According to Ukraine’s presidential office, one civilian was killed and three others wounded after Russia shelled the city of Kherson, which Ukrainian forces recaptured on Nov. 10.

Since Russia invaded on Feb. 24, the war has killed at least 16,784 civilians and injured 10,189, the U.N. High Commissioner for Human Rights estimates.

But U.S. Army General Mark Milley, chairman of the Joint Chiefs of Staff, estimated earlier this month that some 40,000 Ukrainian civilians have been killed or wounded.