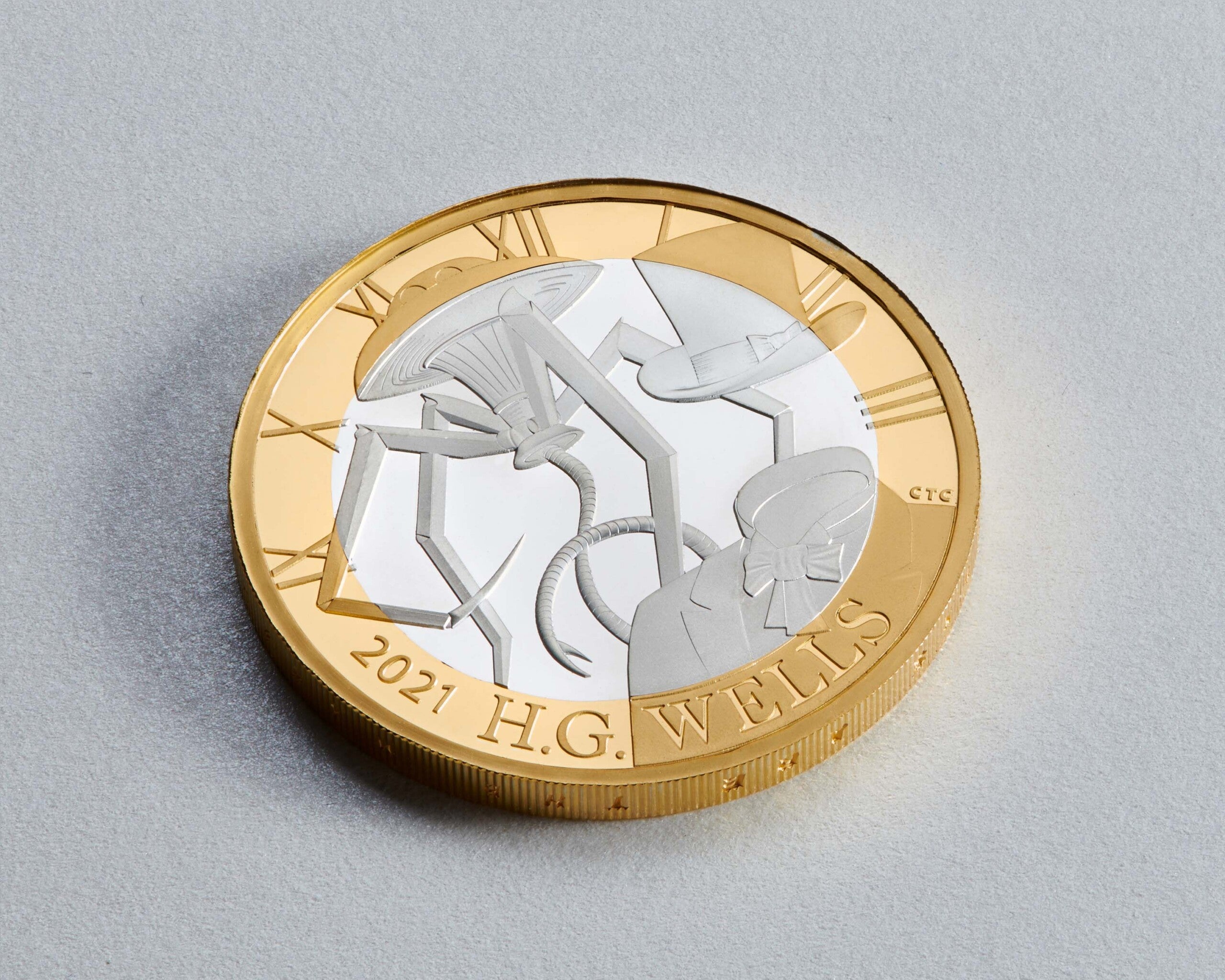 (CNN) — A new British coin commemorating the pioneering science fiction author HG Wells has been criticized for featuring multiple errors — including the decision to give his famous “tripod” machine from “The War of the Worlds” four legs.

The new £2 ($2.70) coin, issued to mark 75 years since Wells’ death, includes imagery from two of his most celebrated books, and was described by the Royal Mint as a “spine-chilling design” when it was unveiled on Monday.

But it was the coin’s inaccuracies that terrified fans of the author. Several of Wells’ admirers reacted in horror to the sight of a four-legged depiction of the tripod, a war machine used by the Martians in “The War of The Worlds.”

“It’s just, given how famous titles like The War of the Worlds and The Invisible Man are, and how influential they’ve been in science fiction and popular culture more broadly, it’s a little surprising the Royal Mint signed off on such elementary errors where this coin is concerned,” he added.

As the name suggests, the tripod only had three legs in Wells’ novel. “How many people did this have to go through? Did they know how to count? Do they know what the “tri” prefix means??” artist Holly Humphries asked on Twitter.

Fans were also disappointed by the appearance of a top hat, supposedly in homage to Wells’ book “The Invisible Man.” The scientist Griffin, the titular Invisible Man, “was no gentleman, and did not wear a top hat,” Roberts said.

“I suspect the designer has been influenced consciously or otherwise by DC Comics’ ‘Gentleman Ghost’ — but he had nothing to do with Wells.”

And another flaw was spotted by Roberts, who said: “The legend written around the rim of the coin, ‘GOOD BOOKS ARE THE WAREHOUSES OF IDEAS’, is (though it’s sometimes attributed to Wells by various internet quote-sites) not an actual quotation by Wells.”

The Royal Mint defended its design but did not specifically respond to the criticism, telling CNN: “The coin depicts the artist’s interpretation of the various machines featured in War of the Worlds and the Invisible Man.”

And Chris Costello, the coin’s designer, insisted he was intentionally reinterpreting imagery from Wells’ works for a modern audience.

“The characters in ‘War of the Worlds’ have been depicted many times, and I wanted to create something original and contemporary,” he said.

“My design takes inspiration from a variety of machines featured in the book — including tripods and the handling machines which have five jointed legs and multiple appendages. The final design combines multiple stories into one stylized and unified composition that is emblematic of all of H.G. Well’s (sic) work and fits the unique canvas of a coin.”

“I think Wells would have been pleased with the idea of the coin. Who wouldn’t? But the errors would have driven him crazy,” Stephen Baxter, a science fiction writer who wrote a 2017 sequel to “The War of the Worlds” that was endorsed by Wells’ estate, told CNN.

“You wouldn’t think you could get the invisible Man wrong, but he never wore a top hat in the book,” he said.

“But worse than that, the (tripod) limbs should have been flexible, lifelike, not stiff rods. And I know Wells would have objected to that because in the book itself he takes a sideswipe at stiff-leg drawings of the machines, used in an earlier newspaper serialisation,” Baxter added.

Wells is one of the UK’s most celebrated authors, and widely regarded as a founder of the science fiction genre.

“The War of the Worlds,” first published in full in 1898, has been perhaps his most enduring work. The book inspired scientists including Robert H. Goddard, who created the world’s first liquid-fueled rocket, and has been adapted for film and television numerous times — including a 2005 Steven Spielberg blockbuster starring Tom Cruise.

In 2013, the Central Bank of Ireland apologized for misquoting James Joyce on a coin commemorating the author of “Ulysses.”