Trial in France for extremist foiled by 3 Americans on train 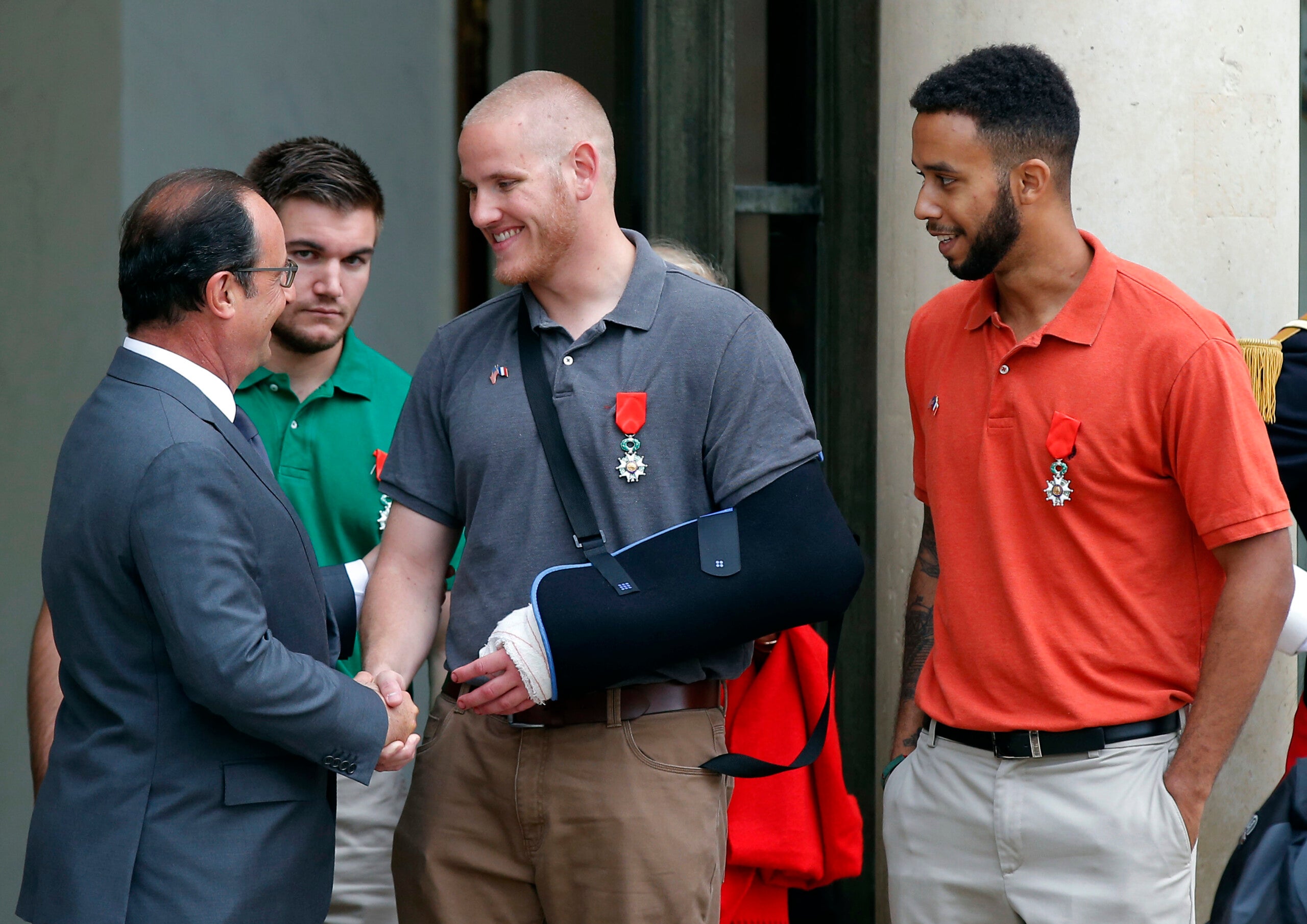 FILE - In this Aug. 24, 2015 file photo, French President Francois Hollande bids farewell to U.S. Airman Spencer Stone as U.S. National Guardsman Alek Skarlatos of Roseburg, Ore., second from left, and Anthony Sadler, a senior at Sacramento State University in California, right, after Hollande awarded them the French Legion of Honor at the Elysee Palace in Paris. The three Sacramento-area men are lorded for their bravery in thwarting a terror attack on a French train in 2015. Islamic State operative Ayoub El Khazzani goes on trial in France Monday Nov. 16, 2020, on terror charges for appearing on a train with an arsenal of weapons and shooting one passenger in 2015. (AP Photo/Michel Euler, File)
by: ELAINE GANLEY and NICOLAS VAUX-MONTAGNY Associated Press
Posted: Nov 16, 2020 / 03:31 PM EST / Updated: Nov 16, 2020 / 03:31 PM EST

PARIS (AP) — Head lowered, an Islamic State operative listened silently as a Paris judge on Monday detailed his alleged plot to unleash mass slaughter on a high-speed train before he was tackled and subdued by American vacationers whose heroics inspired Clint Eastwood to direct a Hollywood re-enactment.

Opening a monthlong trial for Ayoub El Khazzani, the judge said the 31-year-old Moroccan with ties to a notorious mastermind intended to “kill all the passengers” aboard the Amsterdam to Paris train in 2015 but “lost control of events.”

El Khazzani, who is on trial with three suspected accomplices, acknowledged the charges against him with a simple “Yes.”

He risks life in prison if convicted of attempted terrorist murder.

The heavily-armed and bare-chested El Khazzani wounded a French-American who managed to briefly yank a Kalashnikov from his hands before the three vacationing Americans took him down.

The drama on the train is portrayed by investigators as one of a series of IS-linked attacks in Europe that include the Nov. 13, 2015 massacre in Paris at a music hall and cafes that killed 130 people. A failed 2015 attack in Verviers, Belgium, and 2016 attacks in Brussels are also among them.

The suspected mastermind of the Paris massacre, Abdel Hamid Abaaoud, also worked as behind-the-scenes leader of the train attack, according to investigators. Their probe showed that Abaaoud and El Khazzani traveled together from Syria to Belgium and holed up with Chatra in a Brussels apartment.

One of the Americans who tackled the gunman told investigators that he seemed high on drugs and “completely crazy,” the judge said.

A lawyer for the two U.S. servicemen and their friend, whose electrifying capture of El Khazzani inspired Eastwood’s movie “The 15:17 to Paris”, said their heroics during the drama on Aug. 21, 2015 thwarted a “slaughter.”

“This terror attack could have killed up to 300 people based on the number of ammunition that was found on the terrorist and in his bag,” said the attorney, Thibault de Montbrial.

With El Khazzani and his three alleged accomplices seated behind protective glass in a heavily-secured courtroom, the trial opening was largely taken up with procedural issues including whether Eastwood’s presence is needed. That question wasn’t immediately resolved. The actor-director so far hasn’t responded to a summons. The three Americans hailed as heroes are to testify.

El Khazzani boarded the train in Brussels armed with a Kalashnikov, nine clips with 30 rounds each, an automatic pistol and a cutter, according to investigators. A bottle of high flammable yellow liquid also was found in black suitcase, the judge said.

His lawyer, Sarah Mauger-Poliak, said El Khazzani “regrets having allowed himself to become indoctrinated” by extremist propaganda and wants “to demonstrate his remorse.” He wants to speak to the victims if allowed, she said.

El Khazzani, bearded under his mask and his hair pulled back in a bun, said when asked about his prison conditions after several reprimands, “It’s hard,” but “I deserve it.”

Three others, who were not on the train, are being tried as alleged accomplices.

Bilal Chatra, 24, an Algerian member of the Islamic State group, would have been the second man on the train but dropped out of the plot a week earlier. He left Syria for Europe a week before to set up the exit route.

Mohamed Bakkali allegedly sheltered the attackers in Budapest, Hungary, which he denies. The two were arrested in Germany in 2016. A third man, Redouane El Amrani Ezzerrifi, allegedly piloted a boat to help in their return to Europe.

The trial ties into the massacre of 130 people in Paris three months later, on Nov. 13, 2015, at the Bataclan music hall and restaurants and cafes.

Once aboard the train, El Khazzani lingered in a restroom between cars and emerged bare-chested with the Kalashnikov. One waiting passenger struggled with the attacker, then a French-American, Mark Magoolian, wrestled the Kalashnikov away — before being shot himself by a pistol. He jumped in after a French banker, who has asked to remain anonymous, wrestled unsuccessfully with El Khazzani.

Spencer Stone, then a 23-year-old U.S. airman, has said he was coming out of a deep sleep when the gunman appeared. He said Alek Skarlatos, then a 22-year-old U.S. National Guardsman recently back from Afghanistan, “just hit me on the shoulder and said ‘Let’s go.’”

The men, all from California and following what Skarlatos has said was “gut instinct,” snapped into action. Stone and Skarlatos moved in to tackle the gunman, helped by a third man, Anthony Sadler, 23, then a student. Stone said he choked El Khazzani unconscious. A British businessman also joined the fray.

The train rerouted to Arras, in northern France, where El Khazzani was arrested.